If you follow me on any of my social media outlets, you know by now that I am moving back across the country. Raisin Bread and I are packing up and heading back west. We will be calling New Mexico home!

With the knowledge that my days in DC are numbered, I have been trying to soak up as much as possible before I leave. Since moving here four years ago, I have had a love/hate relationship with DC. Two of the things that I DO love about this city are the history and the world-class culture that is accessible here.

Over my second to last weekend in DC, I decided to visit a place that has been on my to-do list for a long time – the Library of Congress‘s Jefferson Building.

This place serves a scholarly purpose but is also amazingly beautiful. I wound up hopping on one of the Library’s docent-led tours to learn more about the architecture and artistic details of the building.

Every corner of the building is decorated with ceiling paintings, mosaics, sculptures and more. 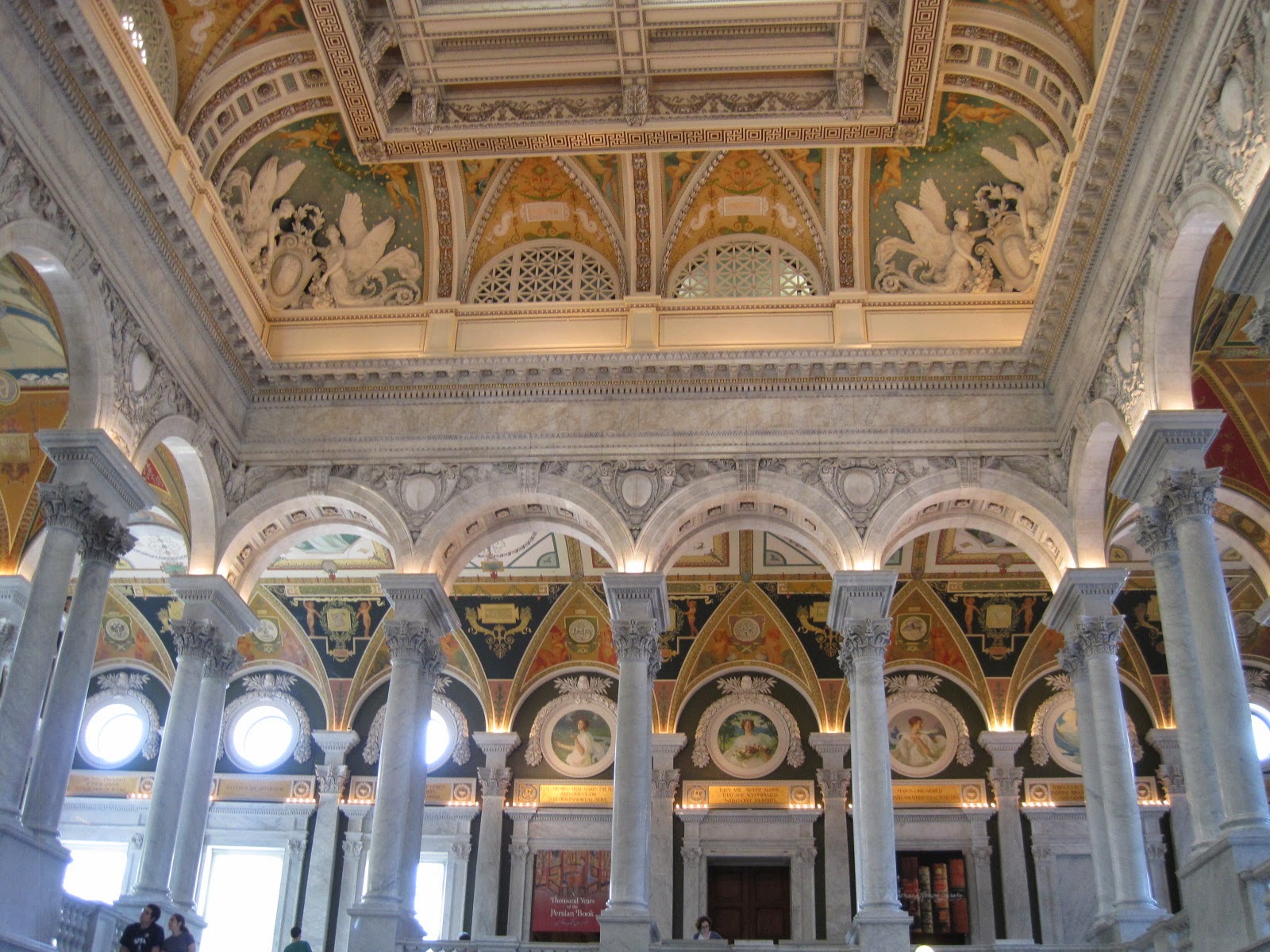 Of course, many of the details focus on learning and scholarly pursuits. 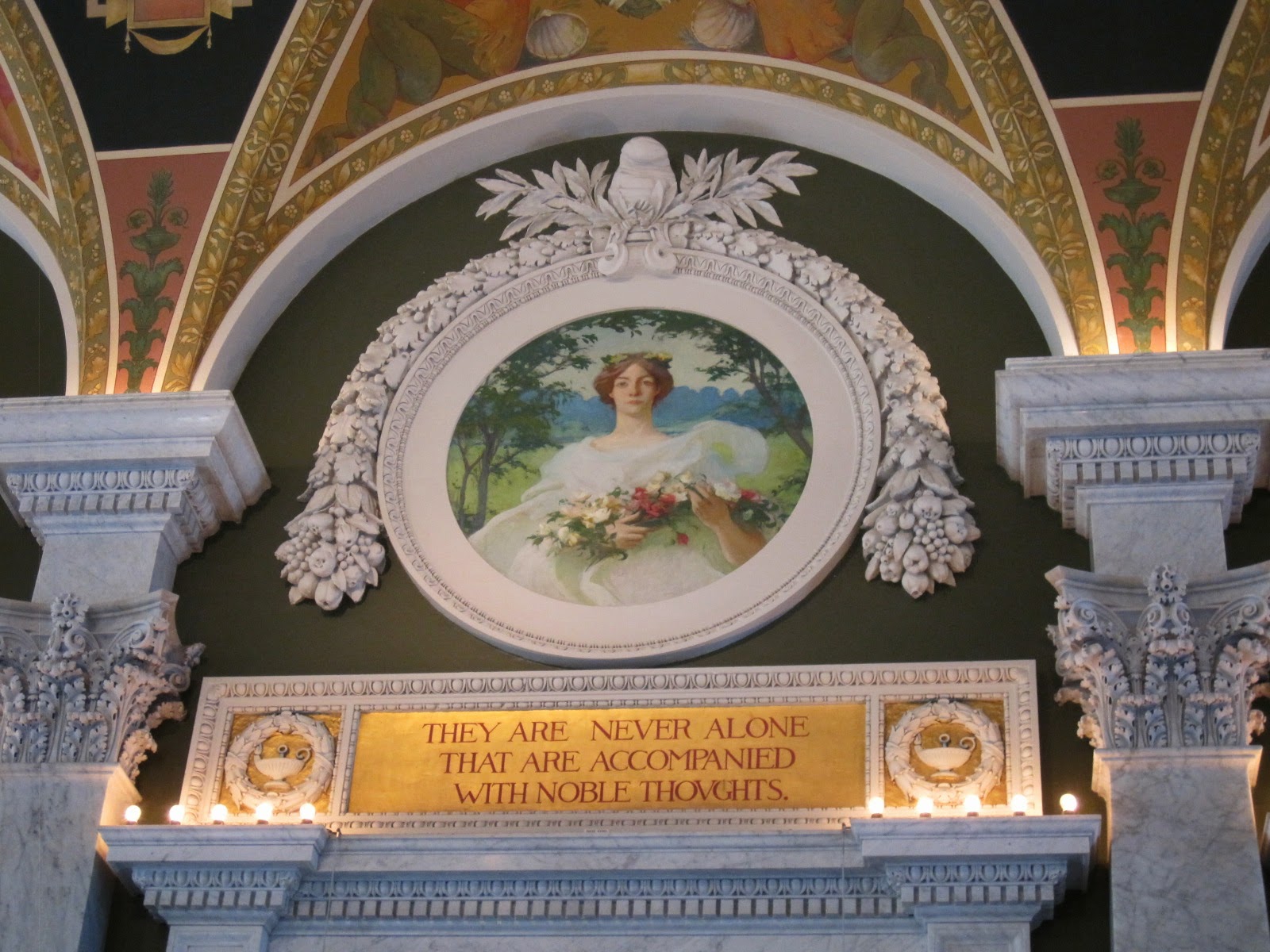 After the tour, I decided to take a detour. Directly across from the Library is the US Capitol Building. There is even a tunnel between the two buildings. 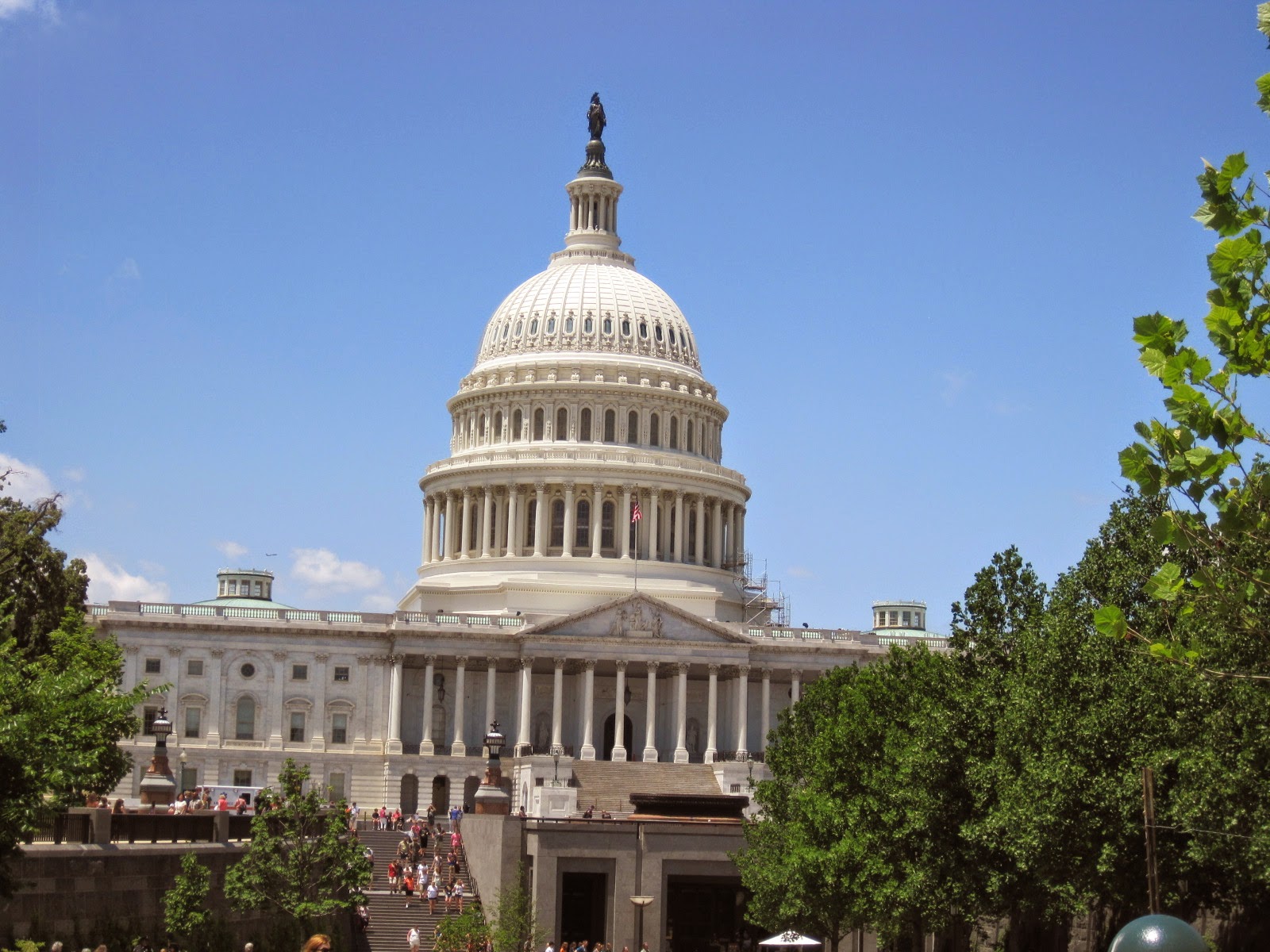 But where I was truly headed was the Supreme Court building. It was a beautiful weekend. Just look at that blue sky! 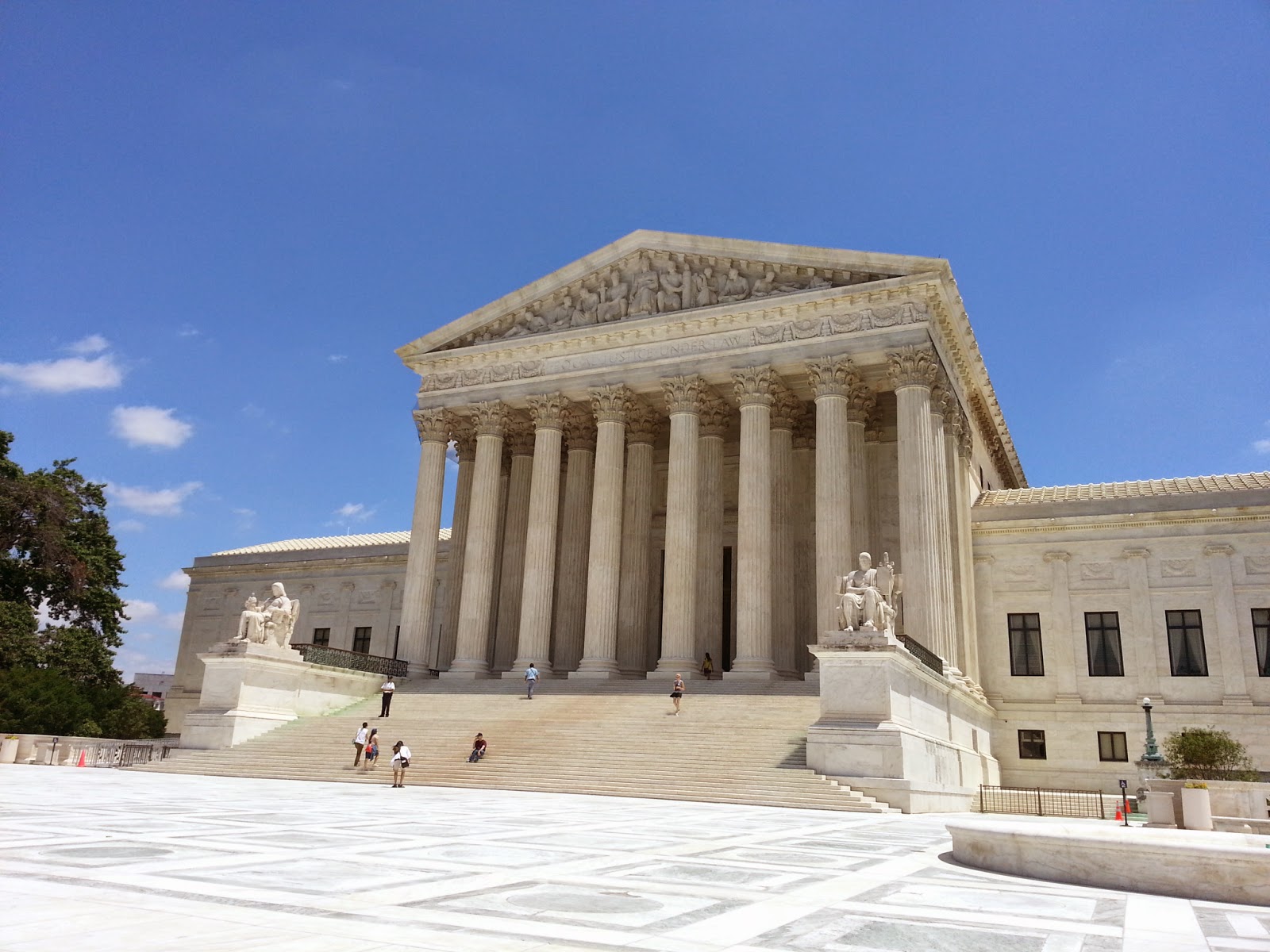 I even walked up the steps of the Supreme Court to check out the bronze doors. The bas-reliefs depict major events throughout history pertaining to justice. 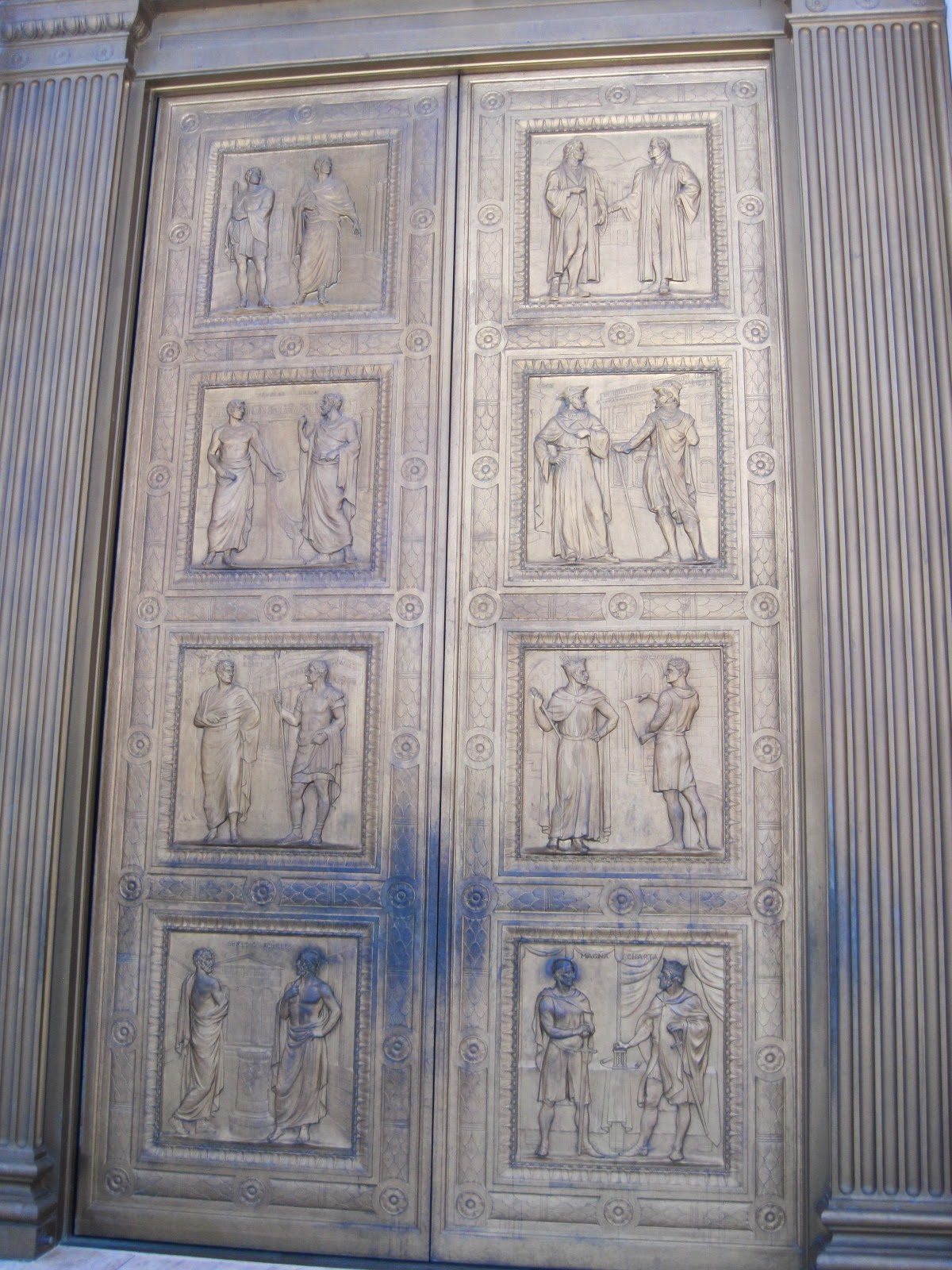 My last stop for the day was Union Station, where I hopped on the Metro.

When I got home, two of my bunny friends were outside my apartment eating some lunch. I will miss these little furry guys!
Despite the fact that summer has not officially started yet, DC is already experiencing high temperatures and disgusting humidity. That means, on my commutes to and from work, hair up is a must. Arriving at work with my hair soaked with sweat and stuck to the back of my neck is not cute.
I have been trying out Active Accessories On-the-Go Hair Band Bracelets for different levels of activities, so a trip on the Metro would be a good test. I received a pack of six of the hair band bracelets in “Elegant.” I love the variety of colors that are available. The metallic and houndstooth print are definitely more stylish than my usual plain black hair bands. 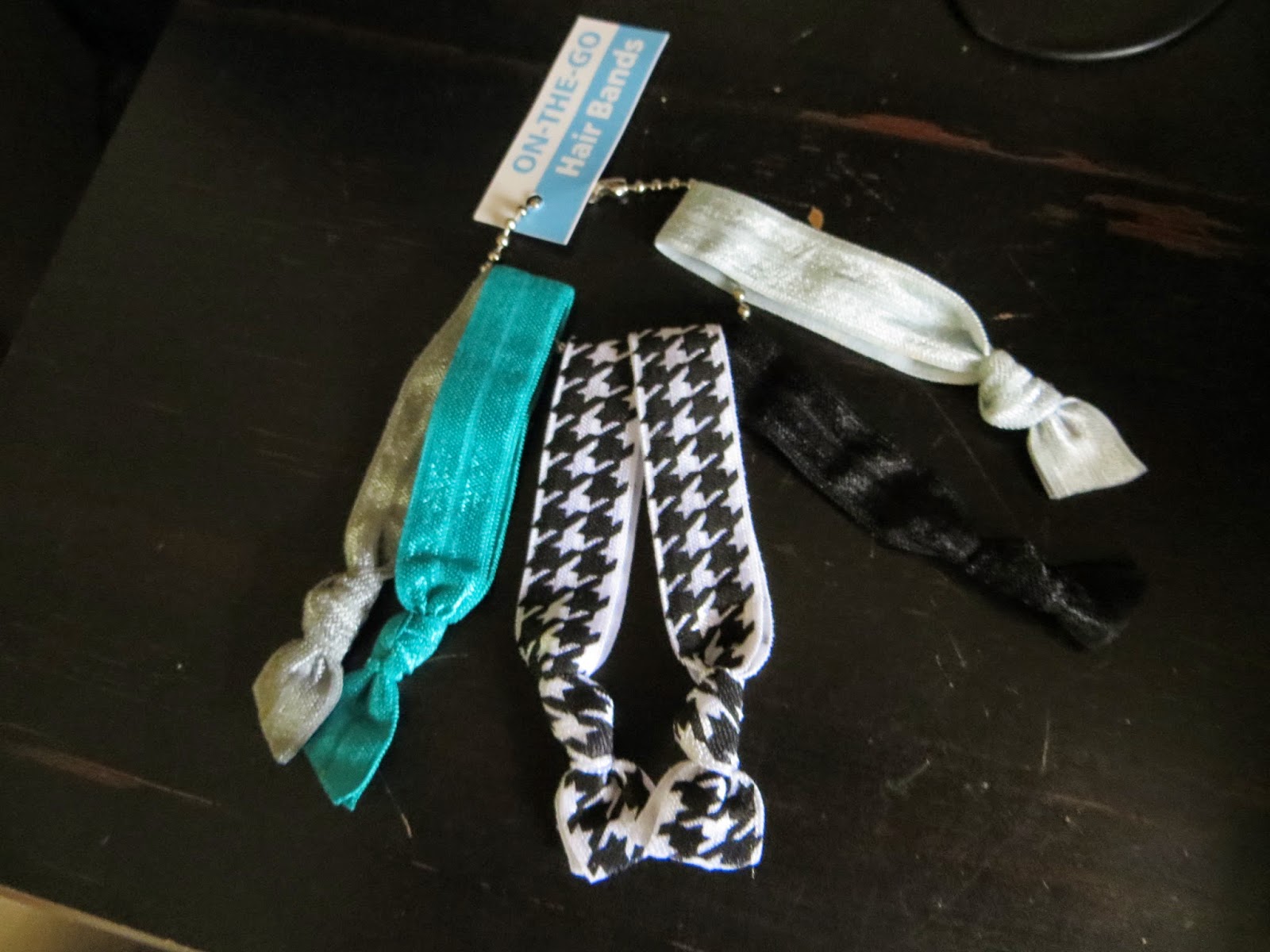 Unfortunately, as soon as I put one of the bands on, I knew that it would not be secure enough to hold my super thick hair, so I doubled up. I love that the band bracelets are fashionable enough to be worn around my wrist without cutting off its circulation. This made it easy for me to take my hair down after I arrived at work and put it back up on my way home. 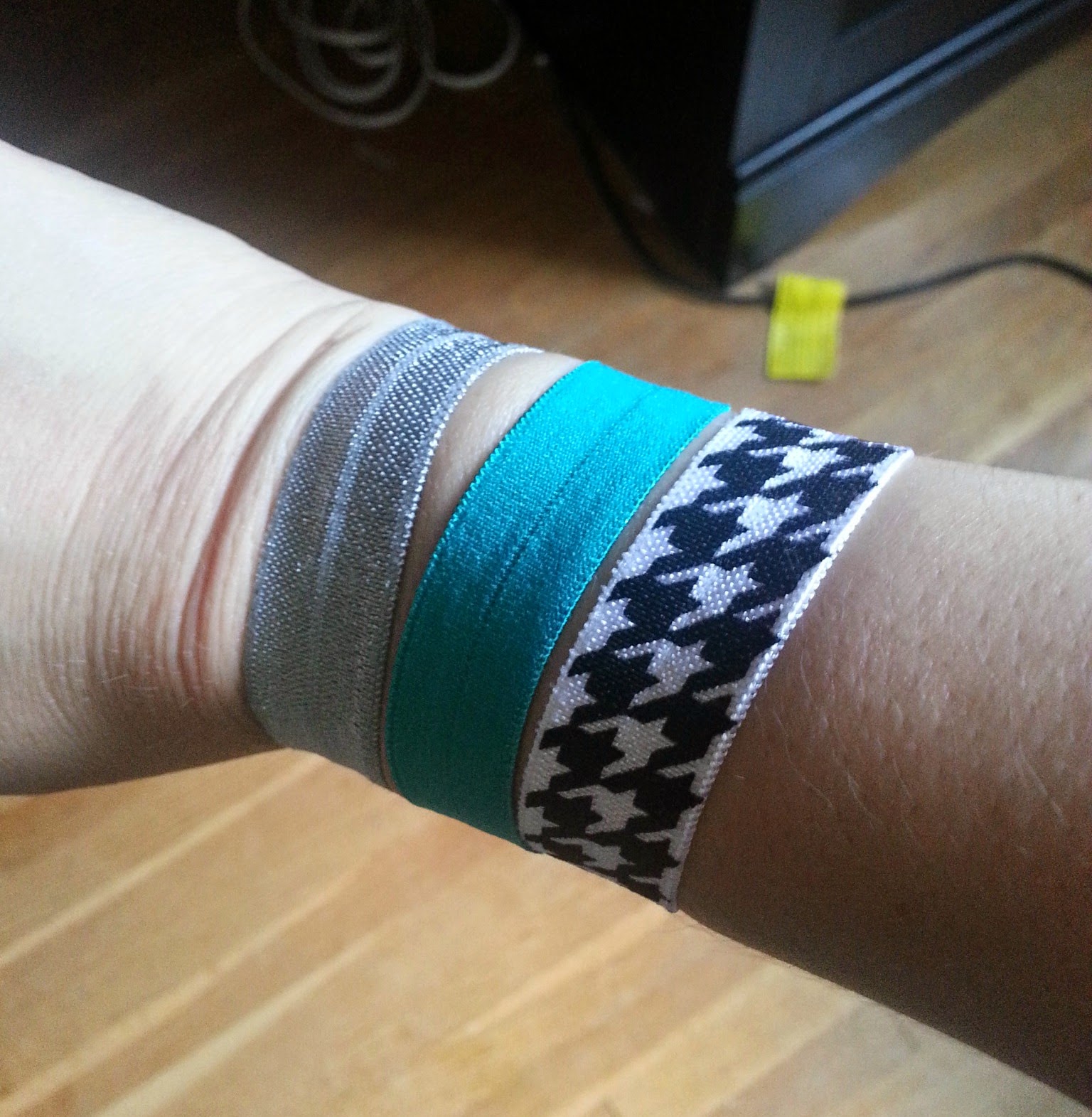 I also tried wearing the bands while doing some household chores and also found them to not be as secure as I would hope. I am pretty certain that they would not work for me during a run or another intense workout.
What’s my take: I love how cute the Active Accessories Hair Band Bracelets are and that they are comfortable enough to be worn around my wrist. Unfortunately, my hair is just too thick to wear them during anything but light activities. I think they would be perfect for someone who does not have so much thick hair. For now, I will be wearing two of them at a time.

Disclosure: I received a pack of six hair bands from Active Accessories for the purpose of this review. All opinions are my own. No compensation was received. Read my full disclosure here.

It was a beautiful weekend in DC! Not too hot, full of sunshine and no thunderstorms! I still have not been released by my doctor to begin exercising again, so I have been doing my fair share of walking. Even walking has been tough going for me. My energy level is still pretty low and I don’t feel anywhere near being fully recovered.

I decided to play tourist in my fair city, taking advantage of the beautiful weather and all of the great things to do in Washington while getting my walks in.
On Saturday, I headed to the National Mall. The plan was to pay a visit to one of my favorite Smithsonian museums: the Hirshhorn Museum. Despite checking out the website beforehand to see what was on, I did not realize that the second and third levels were closed! 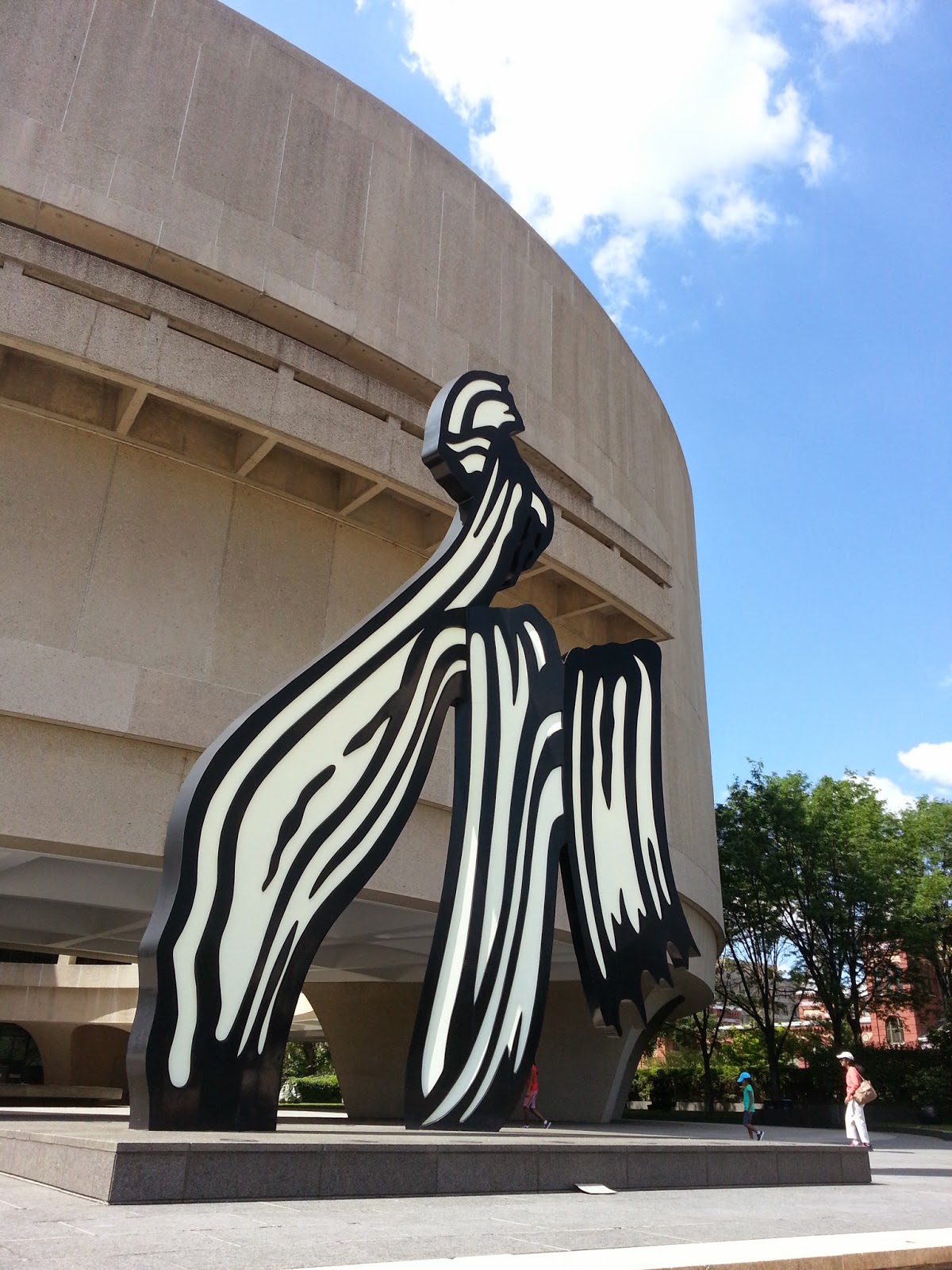 There were only three exhibitions going on. One was Barbara Kruger’s Belief + Doubt, which I had seen before and two video installations, a medium of which I am not a fan. There went my plans.
Despite only spending maybe 15 to 20 minutes in the museum, I actually found myself to be pretty tired. I debated trying to do something else and decided against it. Instead, I headed back to the Metro with my tail between my legs.
I passed by the Art and Industries Building, which has been undergoing renovations for the last 10 years. The building was constructed in 1879 and was covered up with scaffolding for as long as I can recall. To see it in its current state was heartening. The outside looks magnificent. It is sad that there are no plans to reopen the building in the foreseeable future.

Directly across from the Arts and Industries Building is the beautiful Carousel on the Mall. 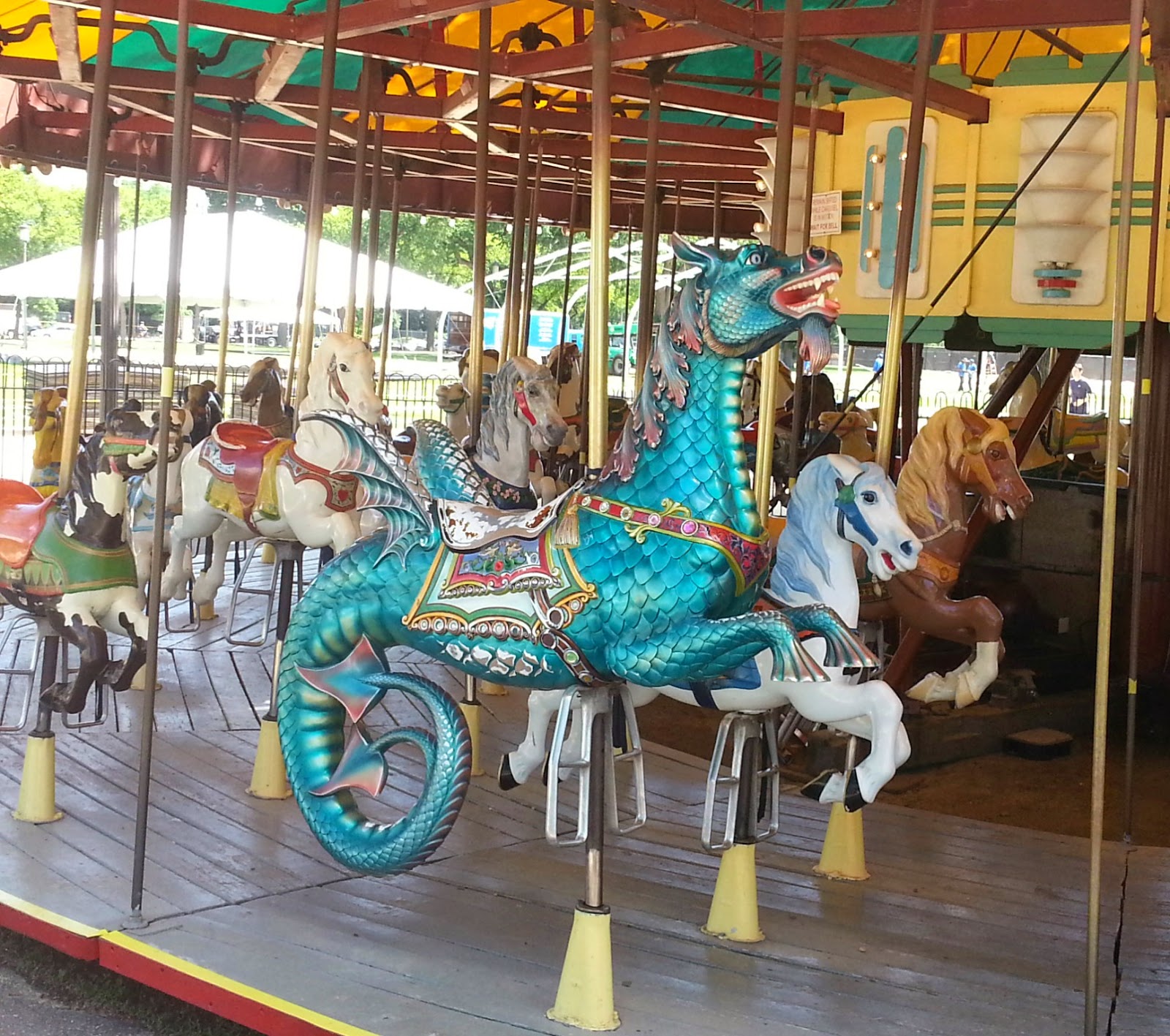 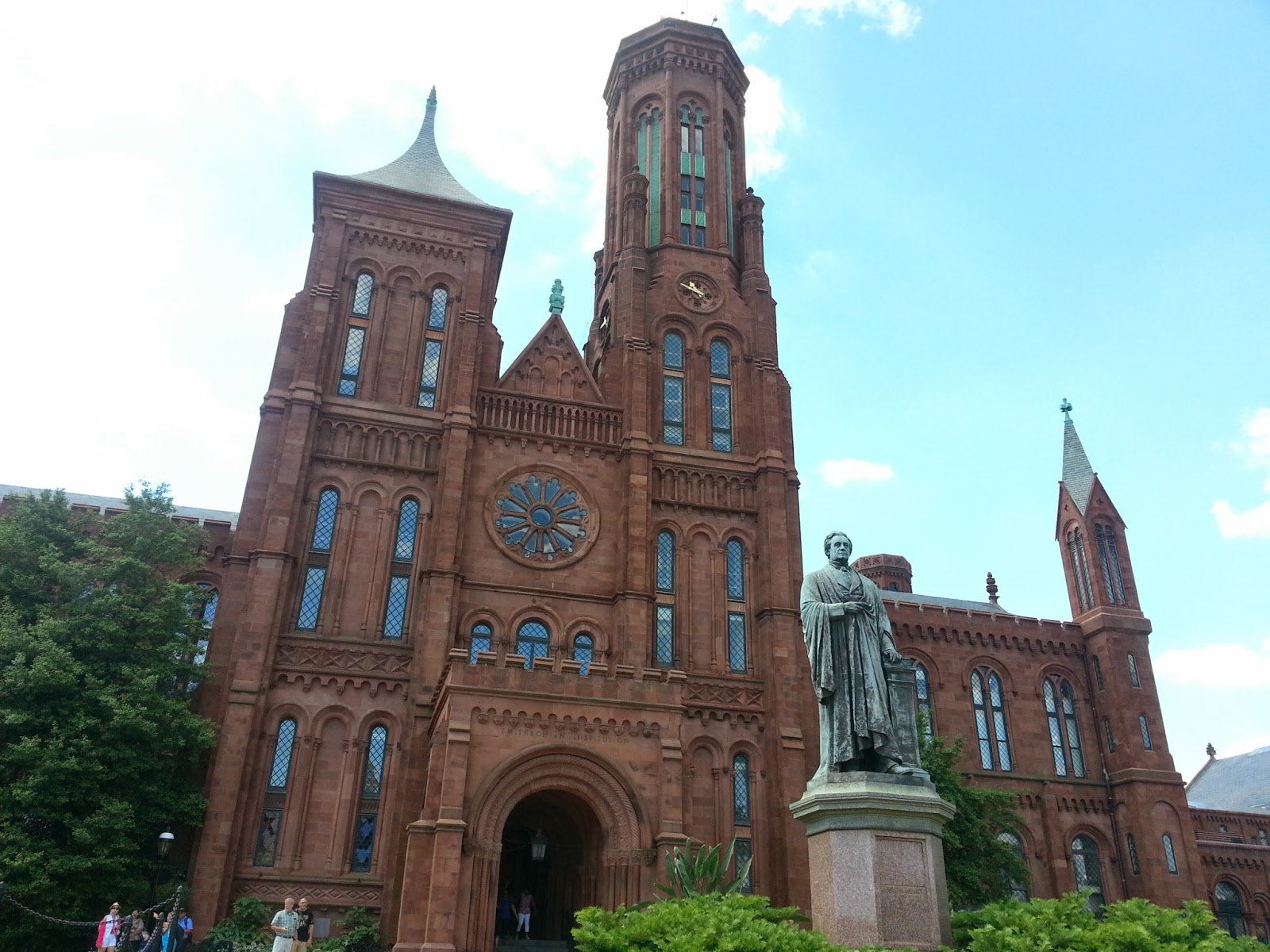 On the way home, I was tempted into buying a faux Cronut from Crumbs Bake Shop. They called it a “Crumbnut.” I should have kept walking because this was not special. The Bavarian creme was pretty tasty though.

On Sunday, I was up bright and early, so I decided to take a walk to Georgetown before its sidewalks were overflowing with tourists and shoppers. 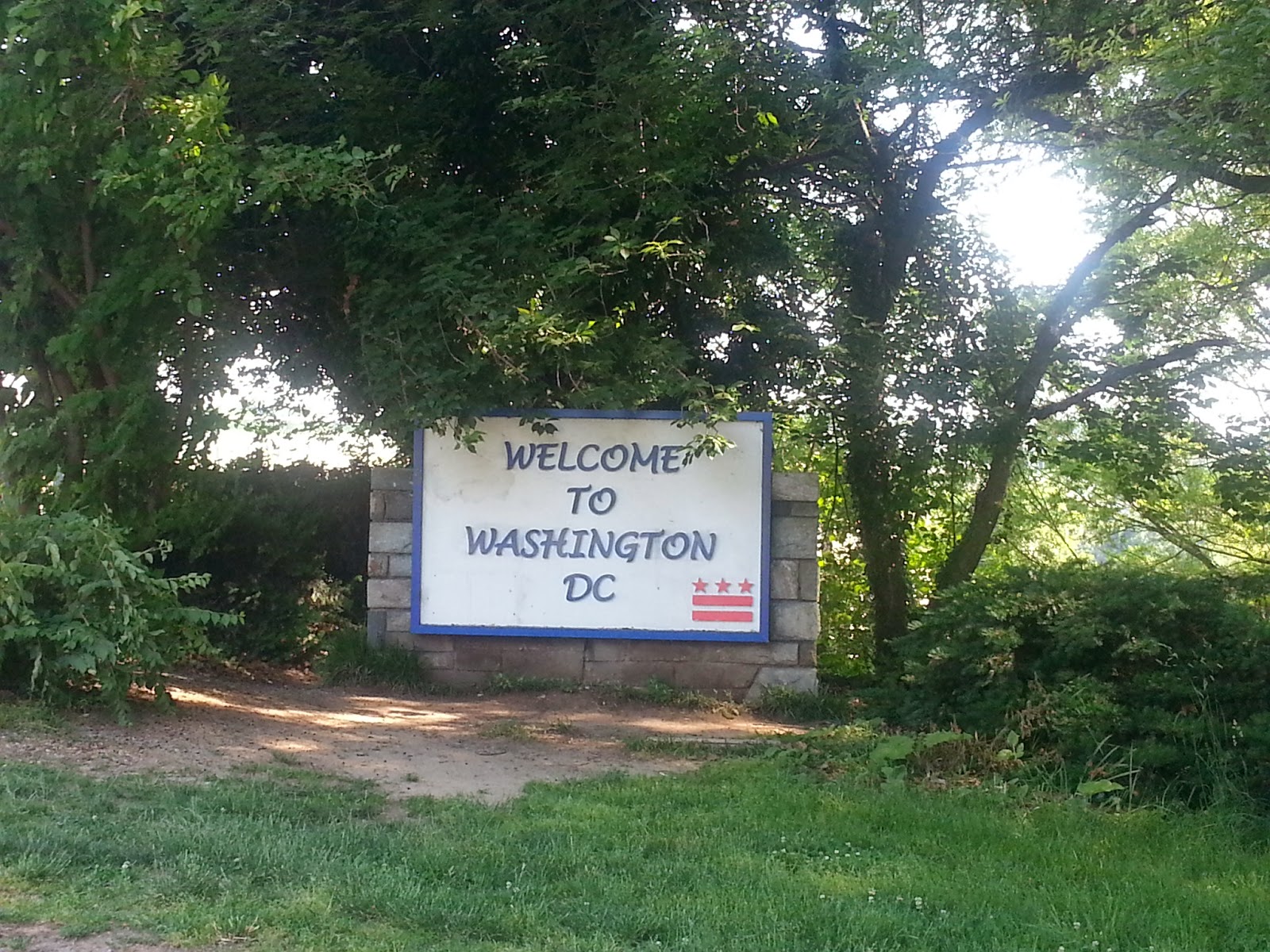 I headed across the Key Bridge. 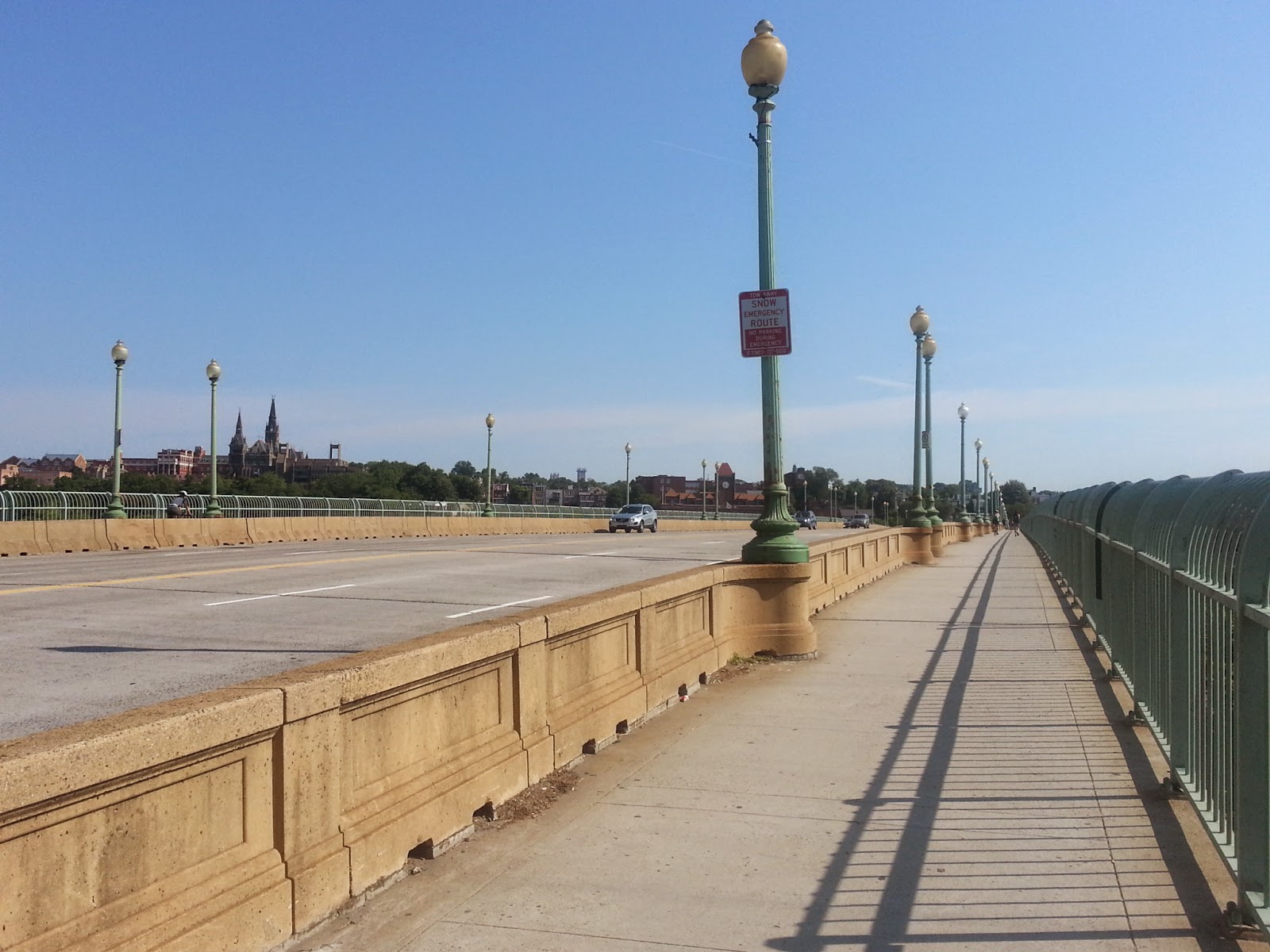 From there, I could see the Washington Monument poking out above the trees. 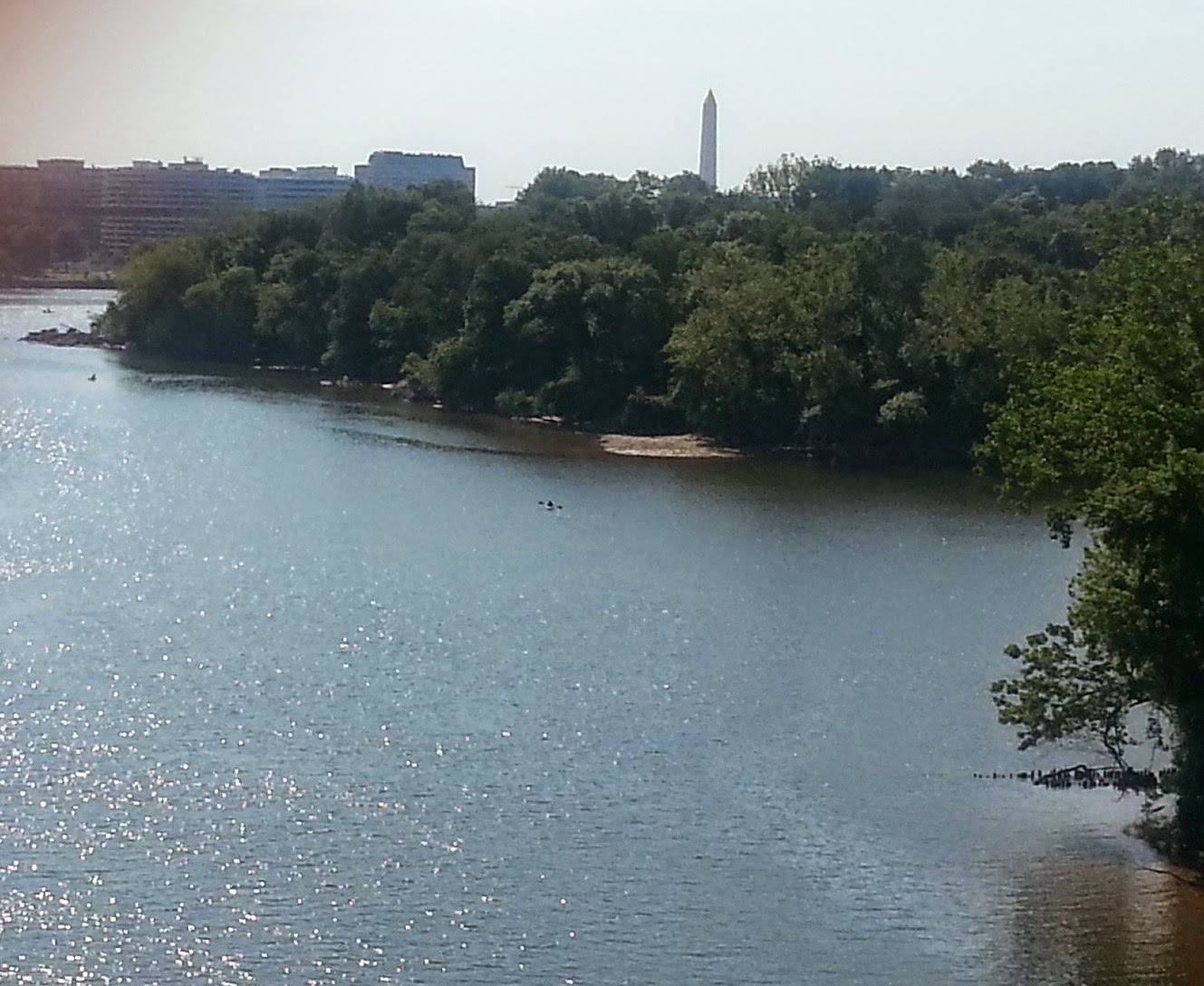 Despite how peaceful the C&O Canal looked, I would not be tricked into taking a stroll along it. The still water plus the humidity equals mosquitoes, and for some reason, I seem to have a target on my back when it comes to mosquitoes. 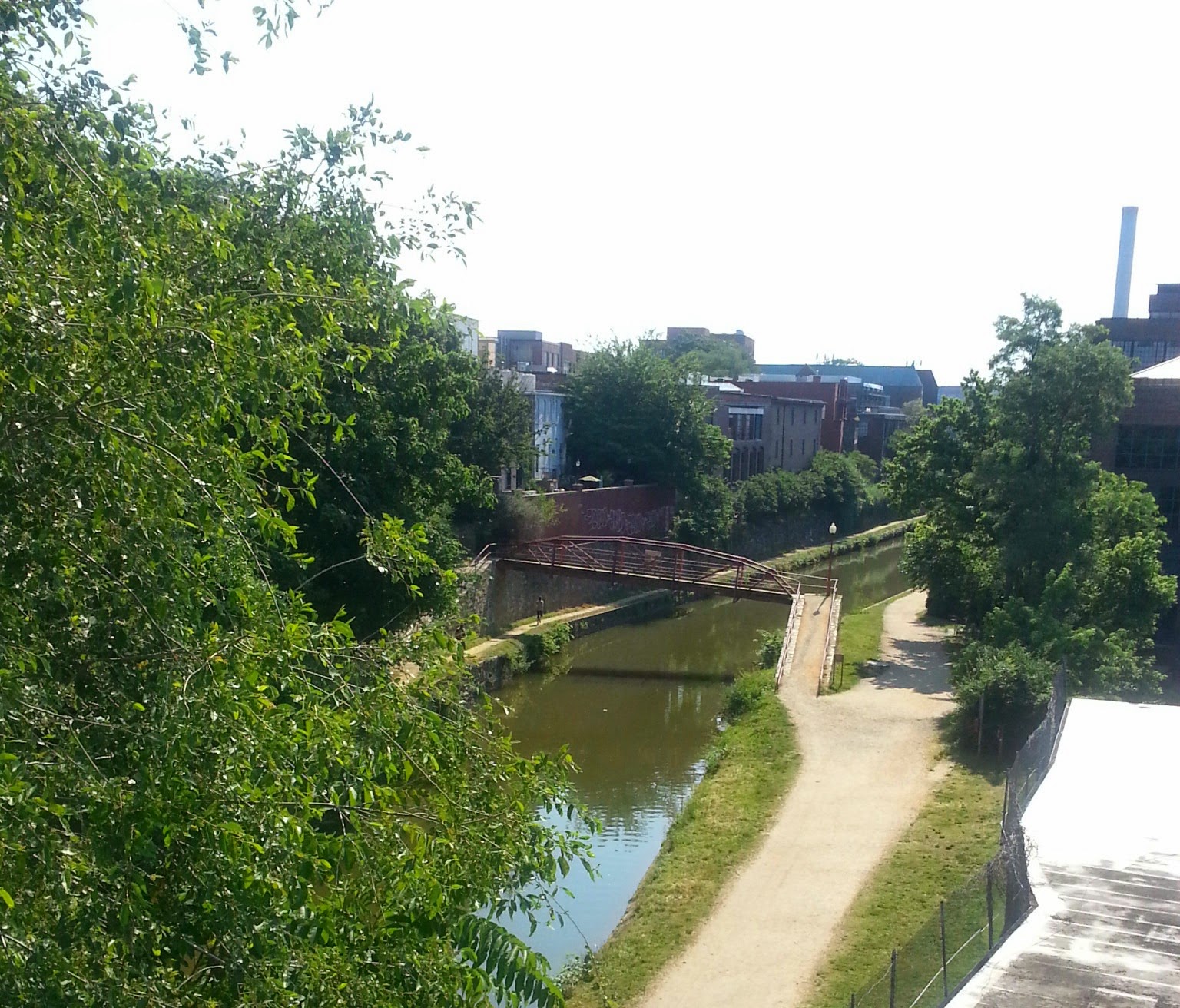 The main reason for my walk to Georgetown was that I wanted to visit the Exorcist Stairs, made famous for their appearance in the film The Exorcist. 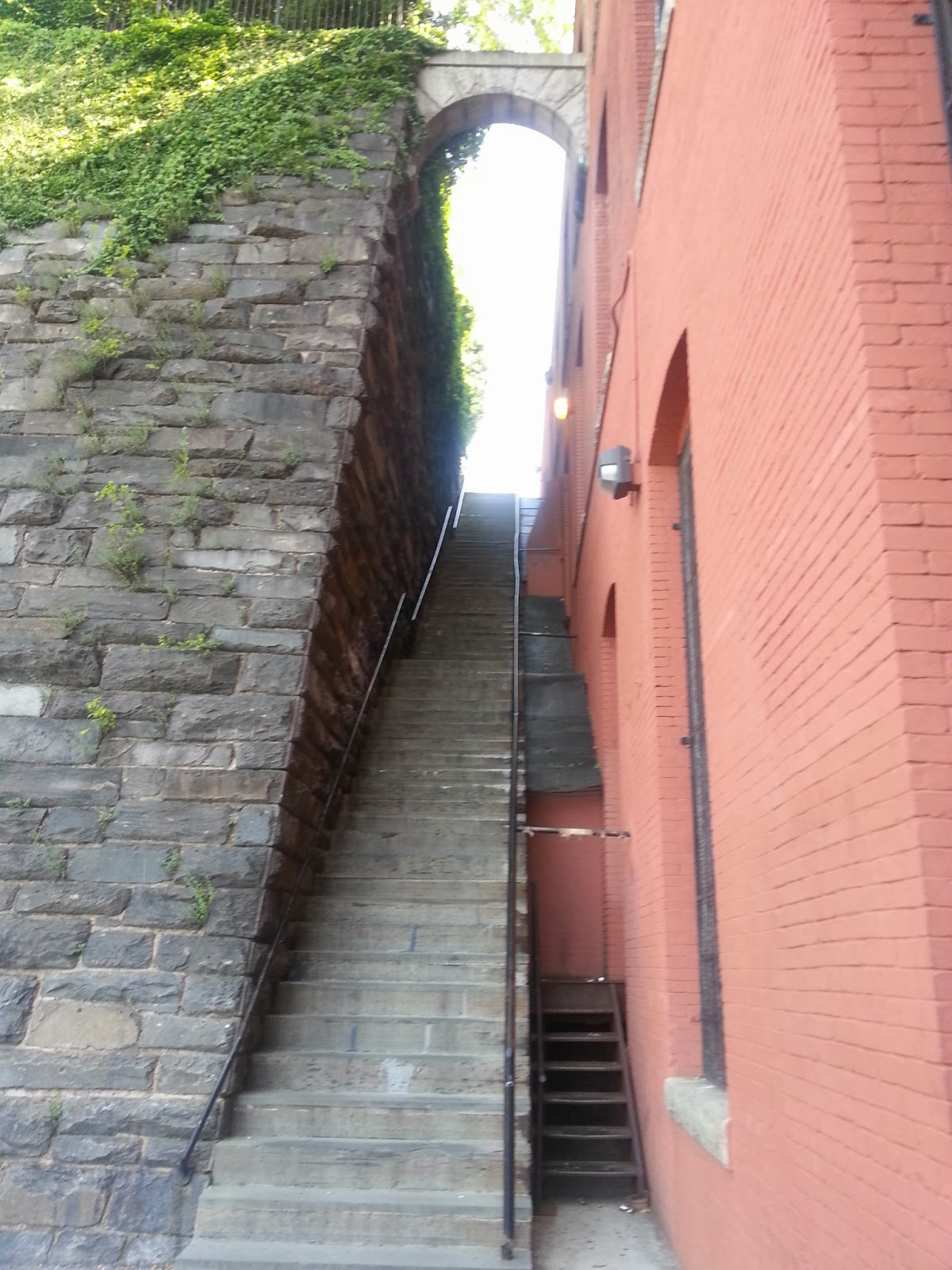 I did not intend to walk up the stairs, but I figured since I was already there, I might as well. 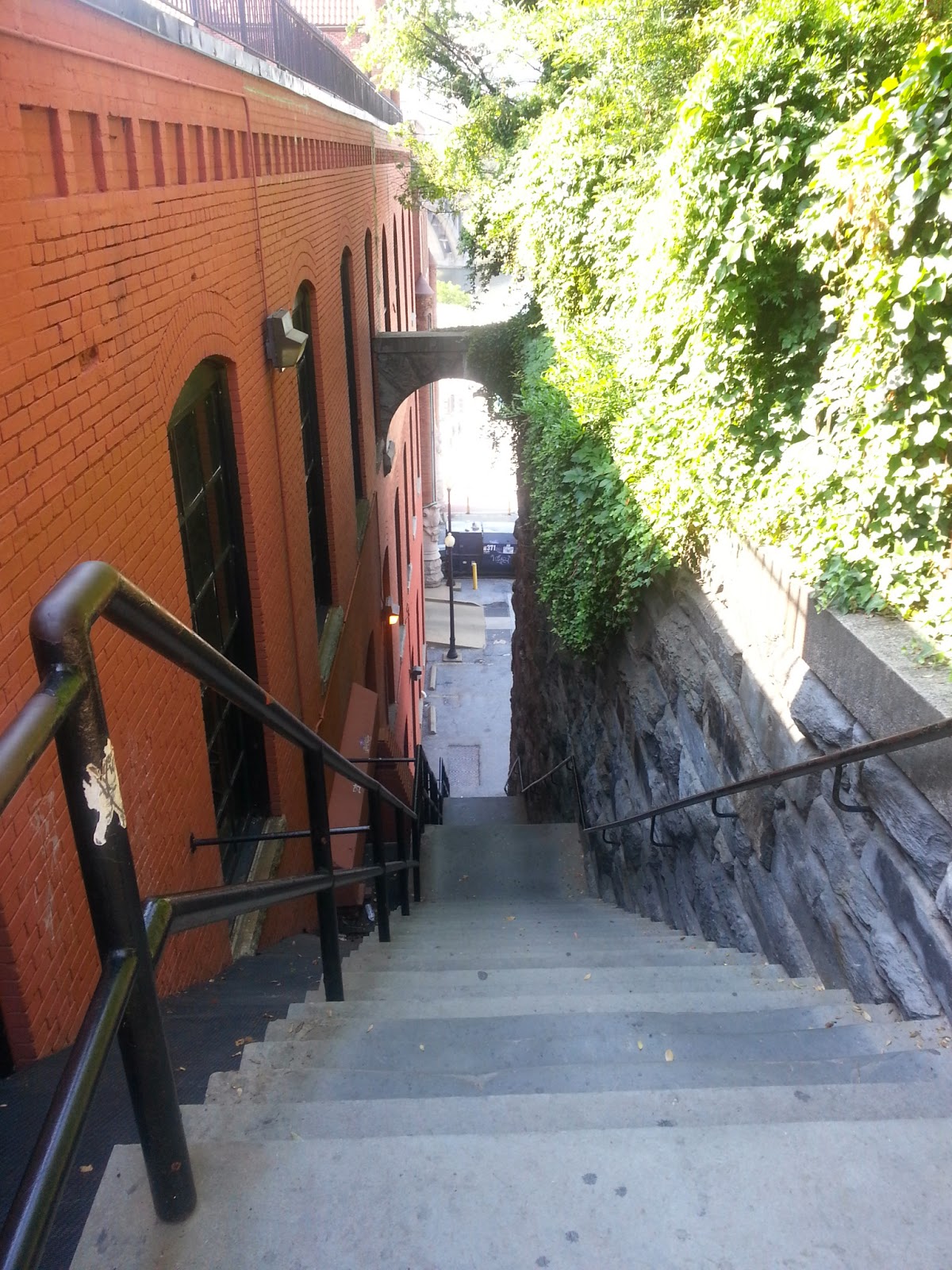 Once I reached the top, I made my way back down again and headed back home. 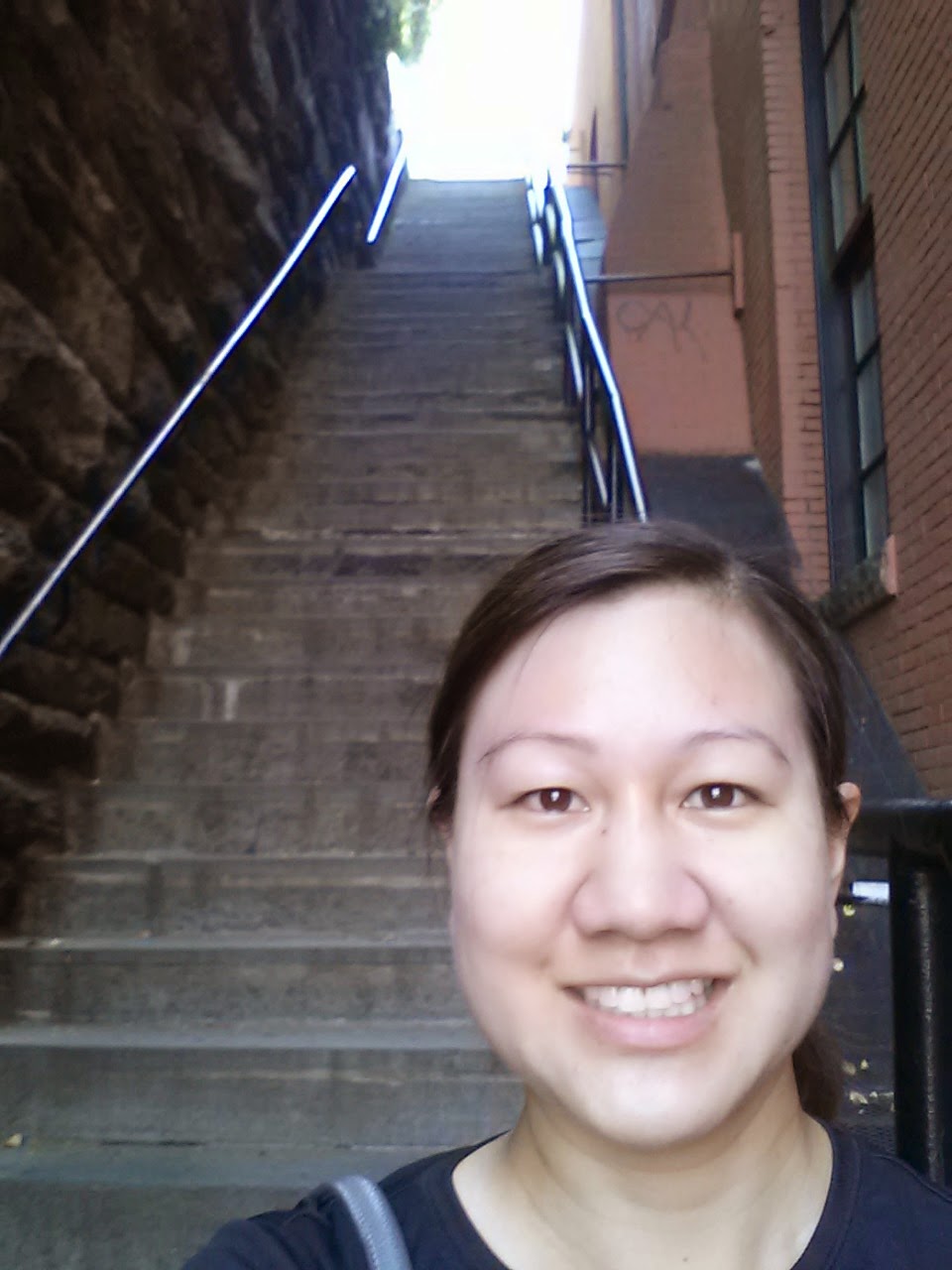 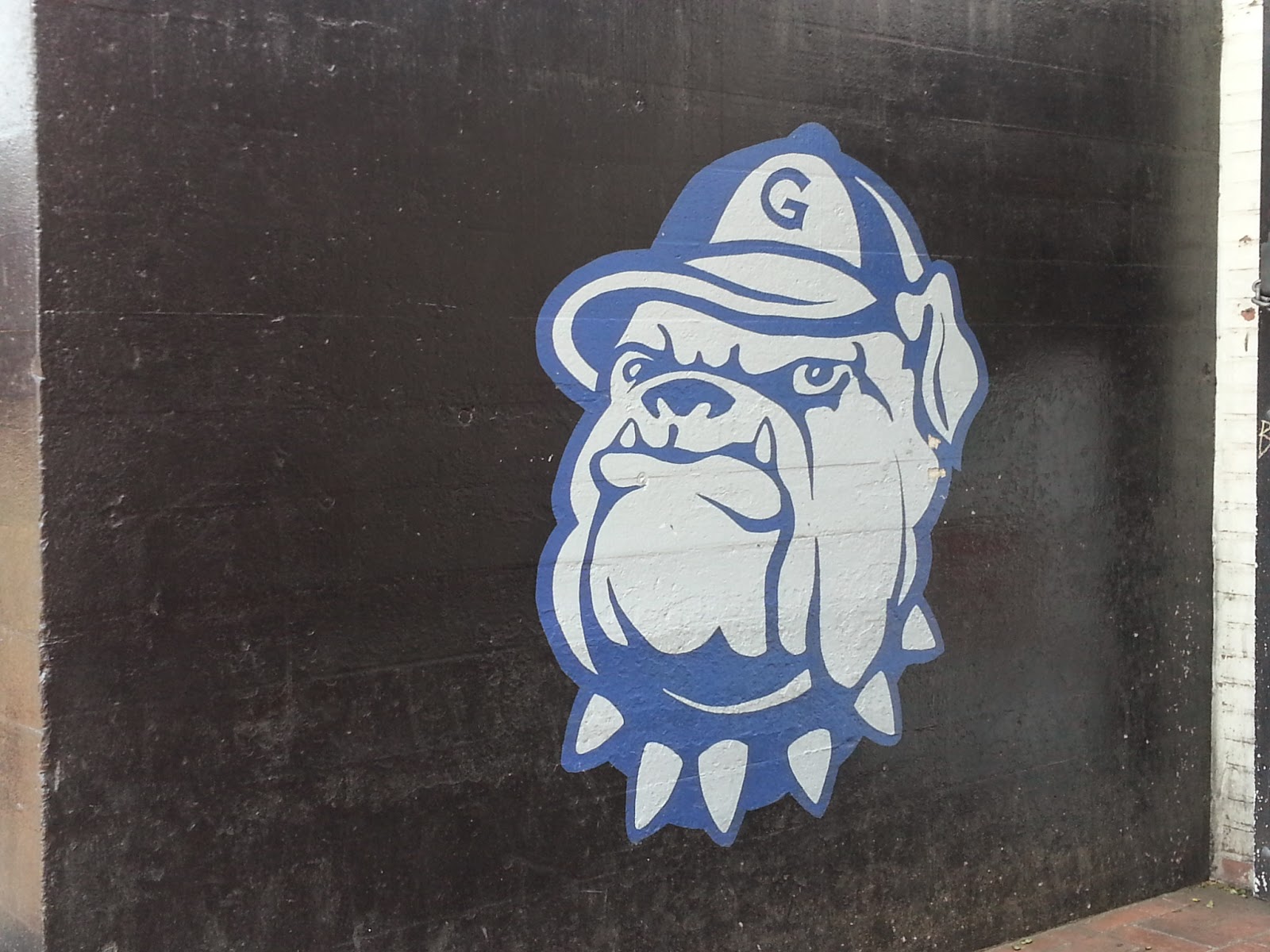 It was back across the bridge for me and into Virginia. 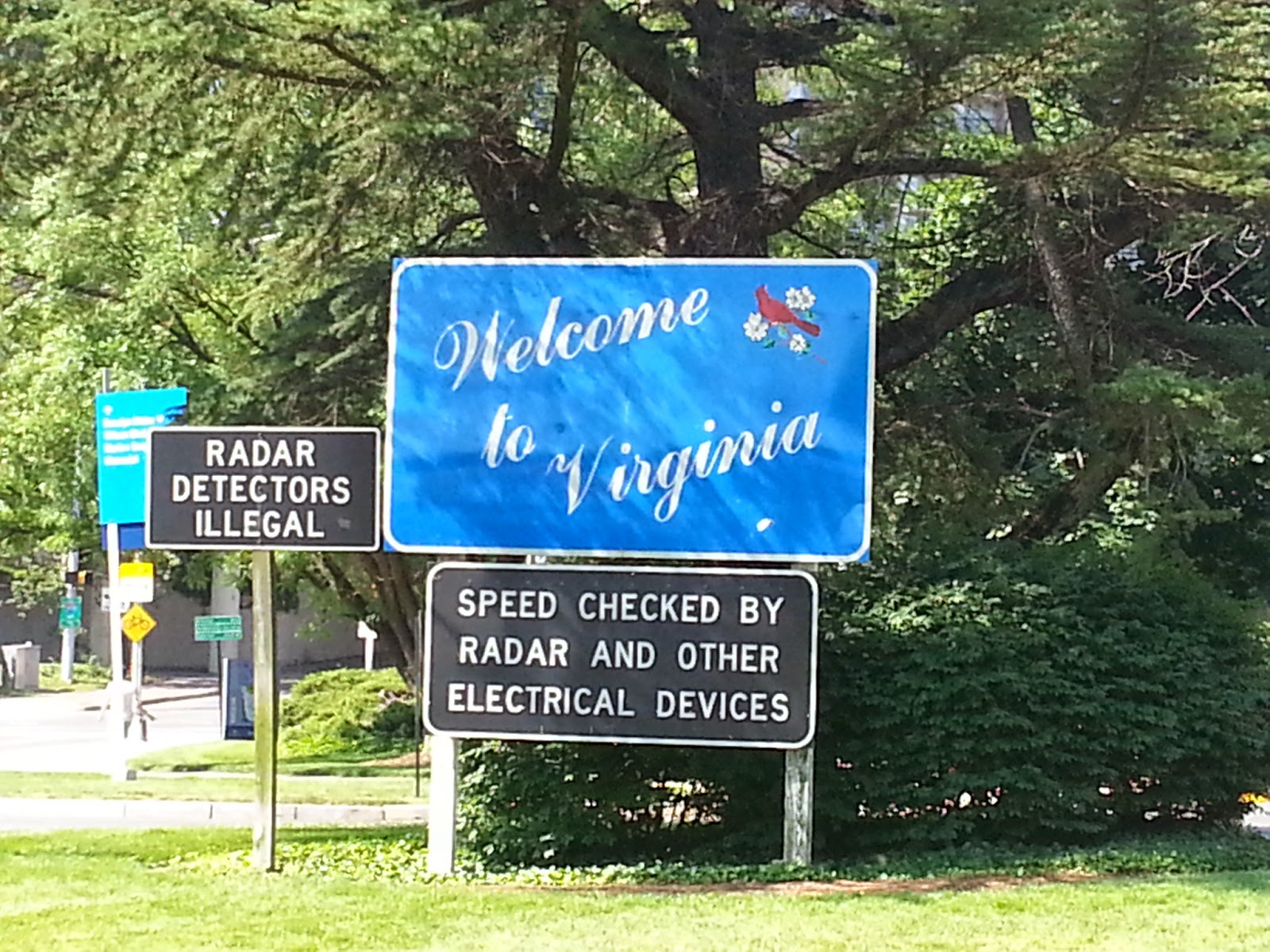 How do you #FuelYourBetter?
That is the question Vega Sport and Fit Approach have posed to me and my fellow Sweat Pink Ambassadors and Vega Bloggers.

With my busy schedule and constant training, getting through a workout is one thing. Gathering the energy to start the workout or even getting myself out the door is another one entirely! Finding the best way to fuel myself prior to a workout has been a challenge I have struggled with. The wrong fuel makes the workouts themselves unnecessarily grueling. Sometimes I even have cut them short for this very reason.

That is why I chose the Vega Sport Pre-Workout Energizer for my product review.

If you remember my review of Vega One’s Nutritional Shakes, you will remember that Vega was created by an endurance athlete who subscribes to a plant-based diet. Likewise, the Vega Sport line of products is plant-based.

For this campaign, I received a box of 12 single packs of the Pre-Workout Energizer in Acai Berry flavor.

I love that they come individually packaged, so that I can take with me on the go. They are perfect for me to take in the late afternoon before my after-work gym time. 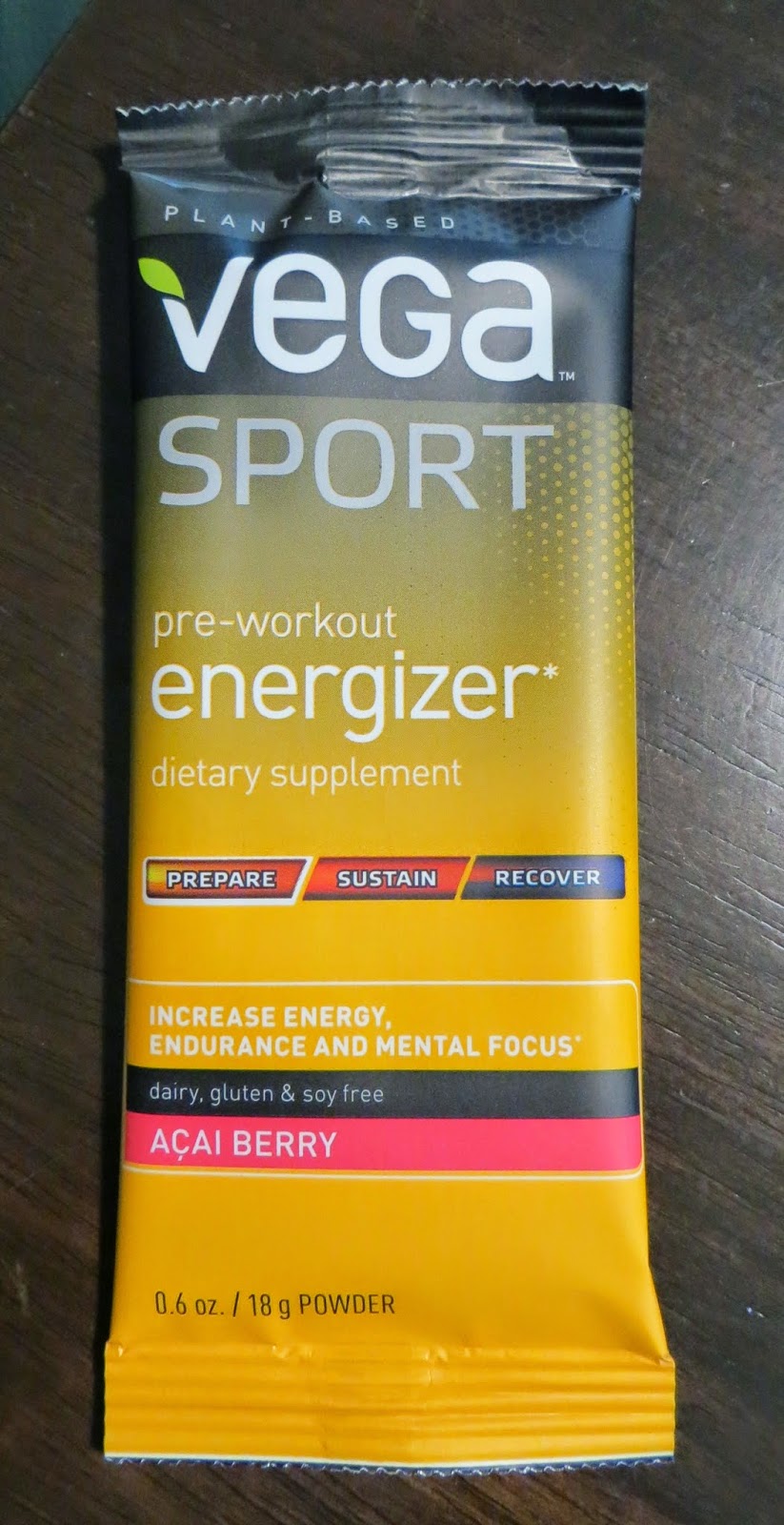 I recently got a shaker cup, so I filled it up and added a pack of the powder to it. Then I gave it a good shake. While the directions say to use 8 ounces of water, I used a bit more because I wanted to dilute the flavor for my own taste.

I love my shaker cup! As you can see, the consistency is quite good and there were not any lumps to be found. 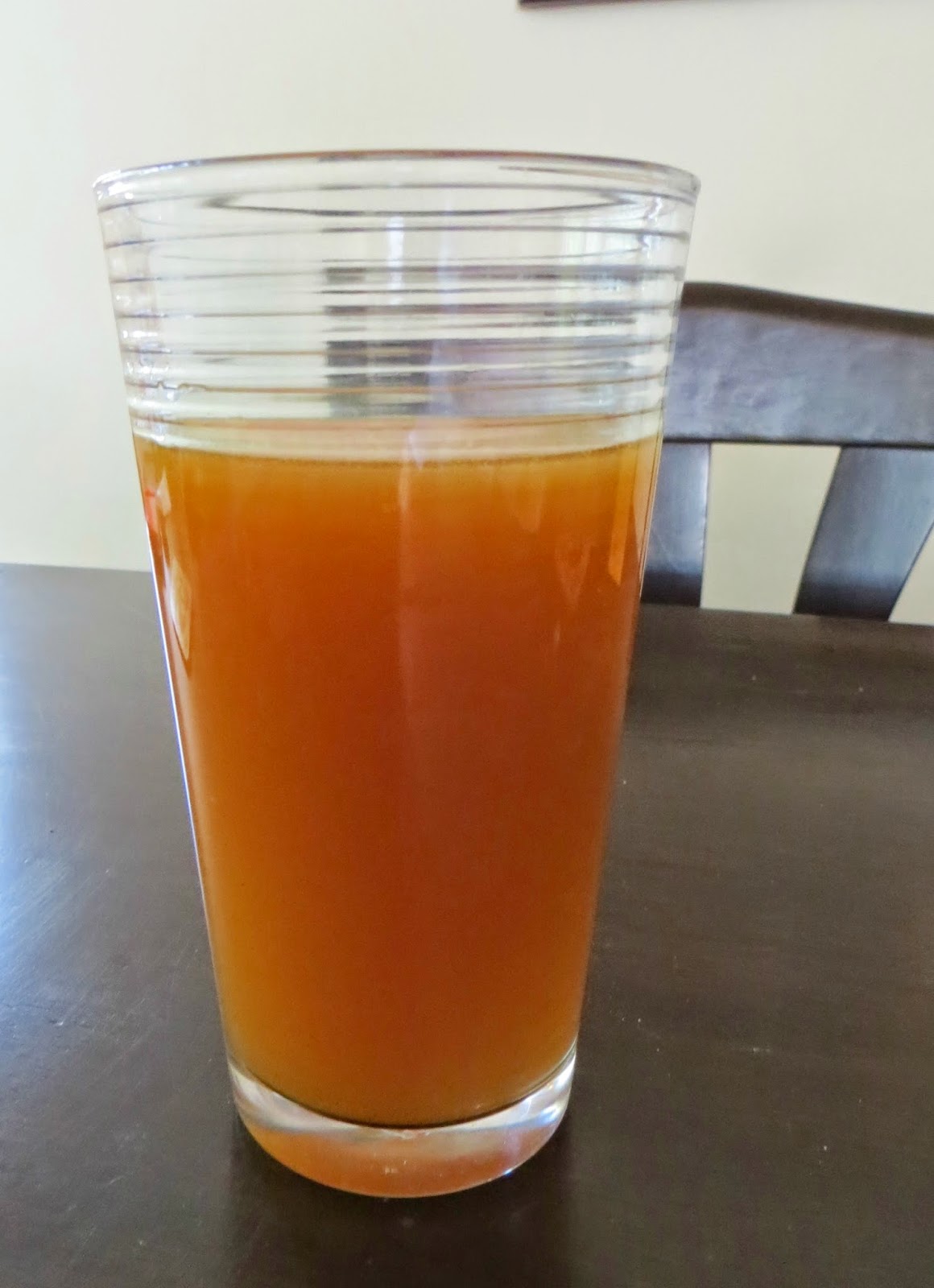 I found myself shocked by the taste! It was actually not too bad, and I can definitely see myself being able to drink these without any problems.
The only downside to my experience with the Pre-Workout Energizer is that I am currently forbidden from working out! I was accepted into this campaign before my surgery, and I am still under doctor’s orders of no exercise…at all.
One thing I am allowed to do is go on walks, so I used the drink prior to my daily jaunts around the block. Energy is something that I have definitely been lacking in my recovery. 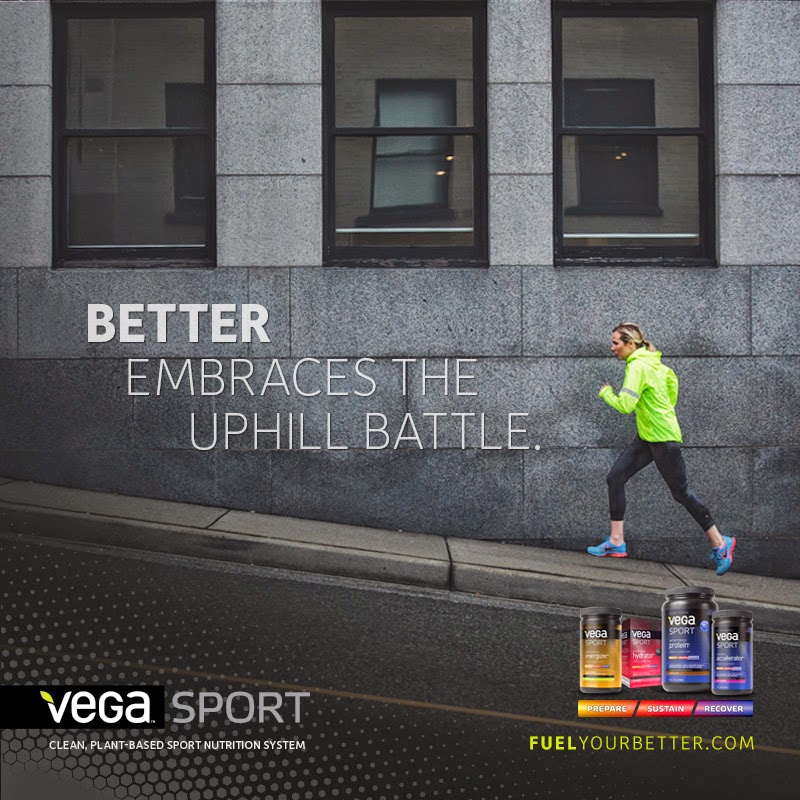 What’s my take? While I haven’t had a chance to see if the Pre-Workout Energizer gives me sustained energy and increased endurance, they have helped fuel my walks around the block. I like the consistency and the flavor is fine. Once I get the okay from my doctor to begin exercising again, I will definitely be testing the drink out some more.
To learn more about Vega Sport’s Fuel Your Better campaign, visit here.
Disclosure: Through my affiliation with Fit Approach, I received one box of Vega Sport Pre-Workout Energizer from Vega for the purpose of this review. No compensation was received. All opinions are my own. Read my full disclosure here.