Skip to content
Search
Close
This winter has been completely brutal. Just when we think it’s going to be spring, here comes another round of snow, wind, rain or a combination of all of the above.
I’m always in the mood for noodles, but after another harsh week of winter weather, nothing sounds better than a big, hearty bowl of ramen noodles. Yum!
Raisin Bread and I visited Kintaro in Georgetown recently to get our ramen fix!
I started off my meal with salmon onigiri. Onigiri is basically a rice ball wrapped in nori, but mine also had a bit of salmon tucked away in the middle. It also came with a few pickles. I guess that a rice ball can sound pretty bland, but I’ve always found it to be a perfect snack.

After my onigiri, I moved on to my bowl of tonkotsu ramen. Tonkotsu refers to the soup base and is pork bone broth. Along with oodles of noodles, my bowl came with sliced pork, bean sprouts, scallions, boiled egg, fish cake, seaweed and pickled ginger.

While it wasn’t the best bowl of ramen I’ve ever had in my life or even in DC, it was delicious and kept me warm on another cold winter’s day.

In addition to ramen, Kintaro serves sushi, sashimi, teriyaki and other warm dishes.

Half marathon number 3 is in the books! On Saturday, I ran the 2014 Rock ‘N’ Roll USA Half Marathon in Washington, DC. I was hoping to knock out two of my 60 Goals in 3 Years with this race. I ran a local half marathon but did not manage to finish in 2:30. That goal remains on the to do list! 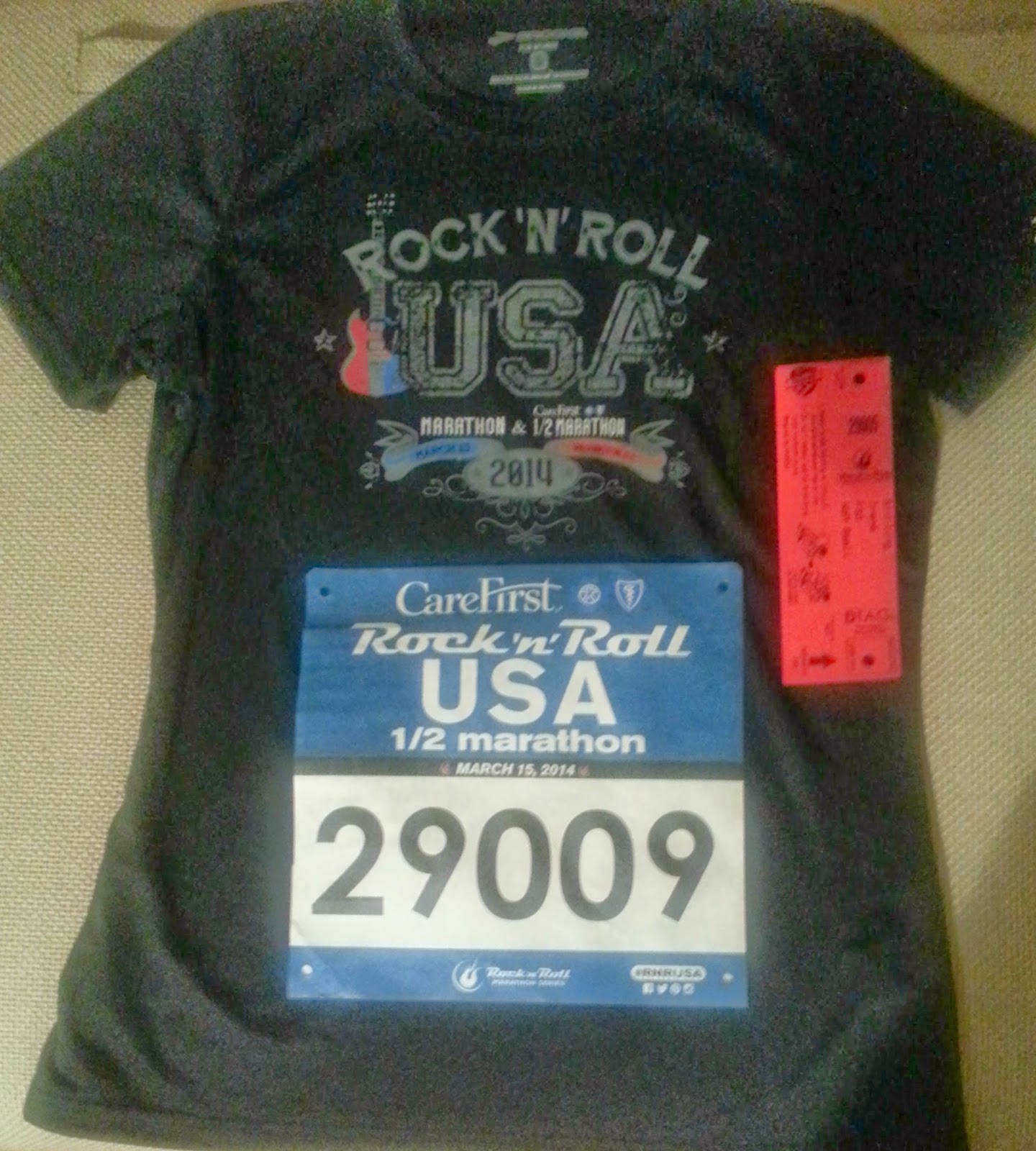 On Thursday, I headed to the Expo to pick up my race packet. I was pressed for time, so I was not able to wander the booths to see what was new. 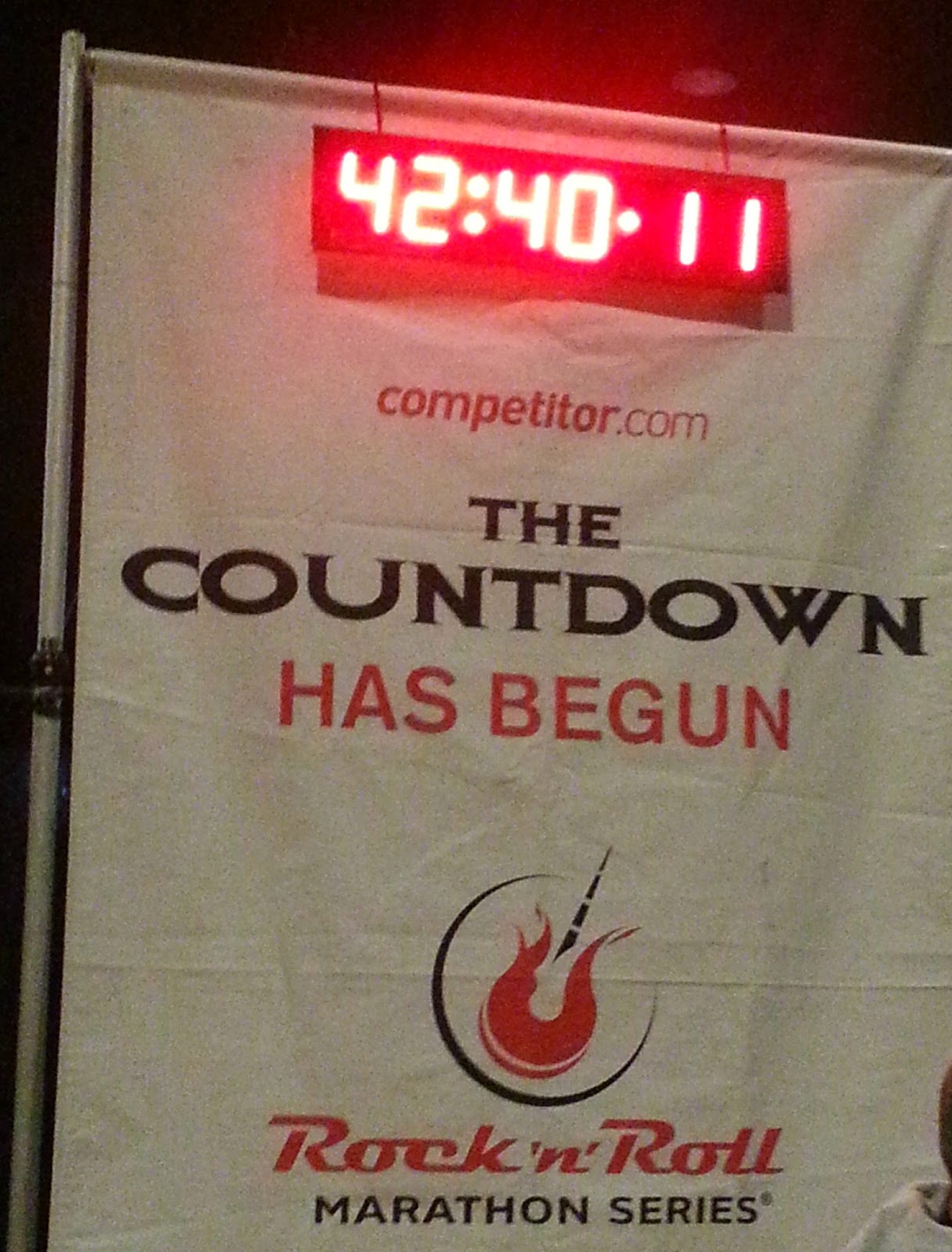 In addition to a technical race shirt in women’s size (yes!), I got a nice gear bag. 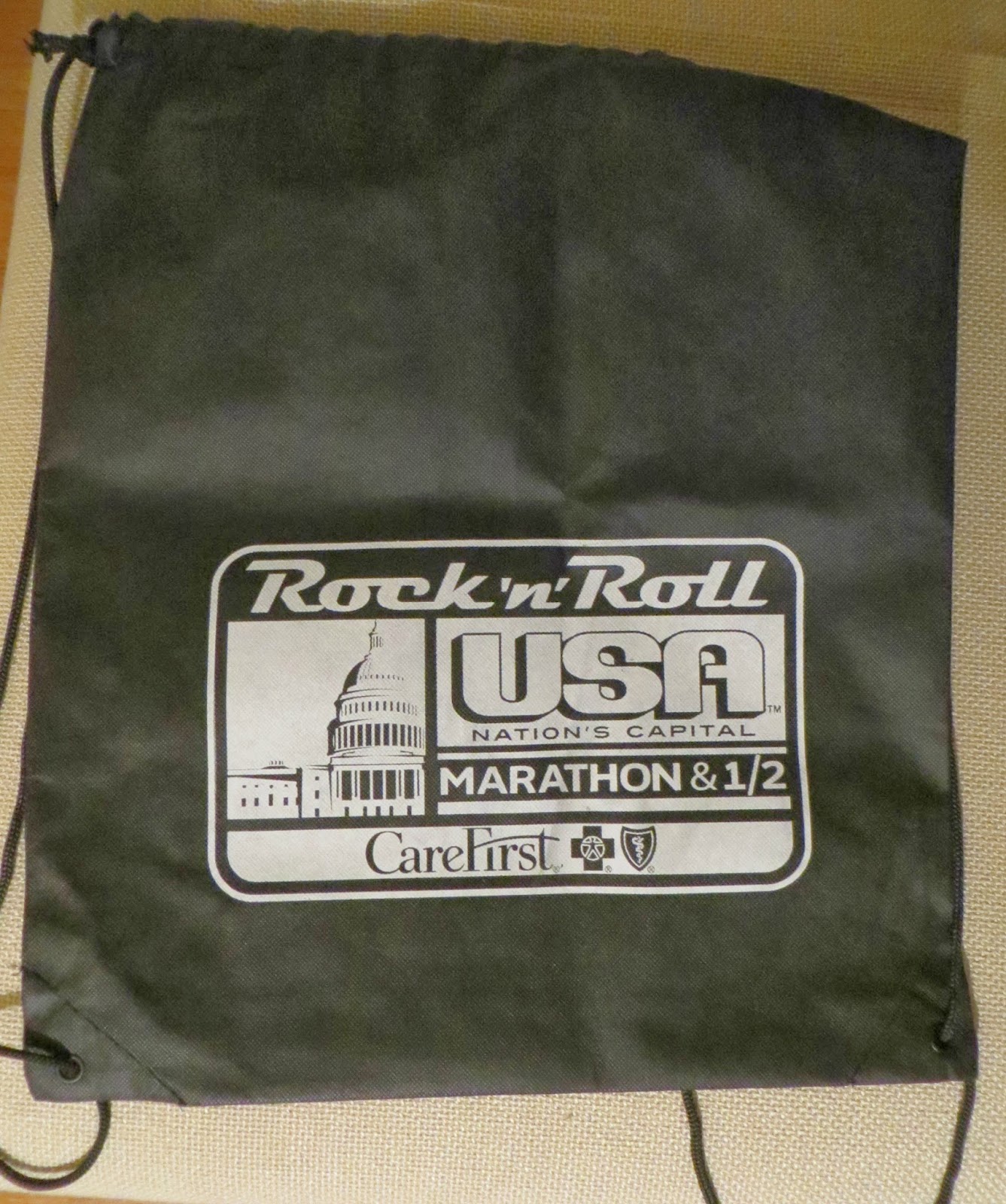 For my pre-race dinner, I had a big cobb salad with grilled chicken from Rhodeside Grill in Arlington. 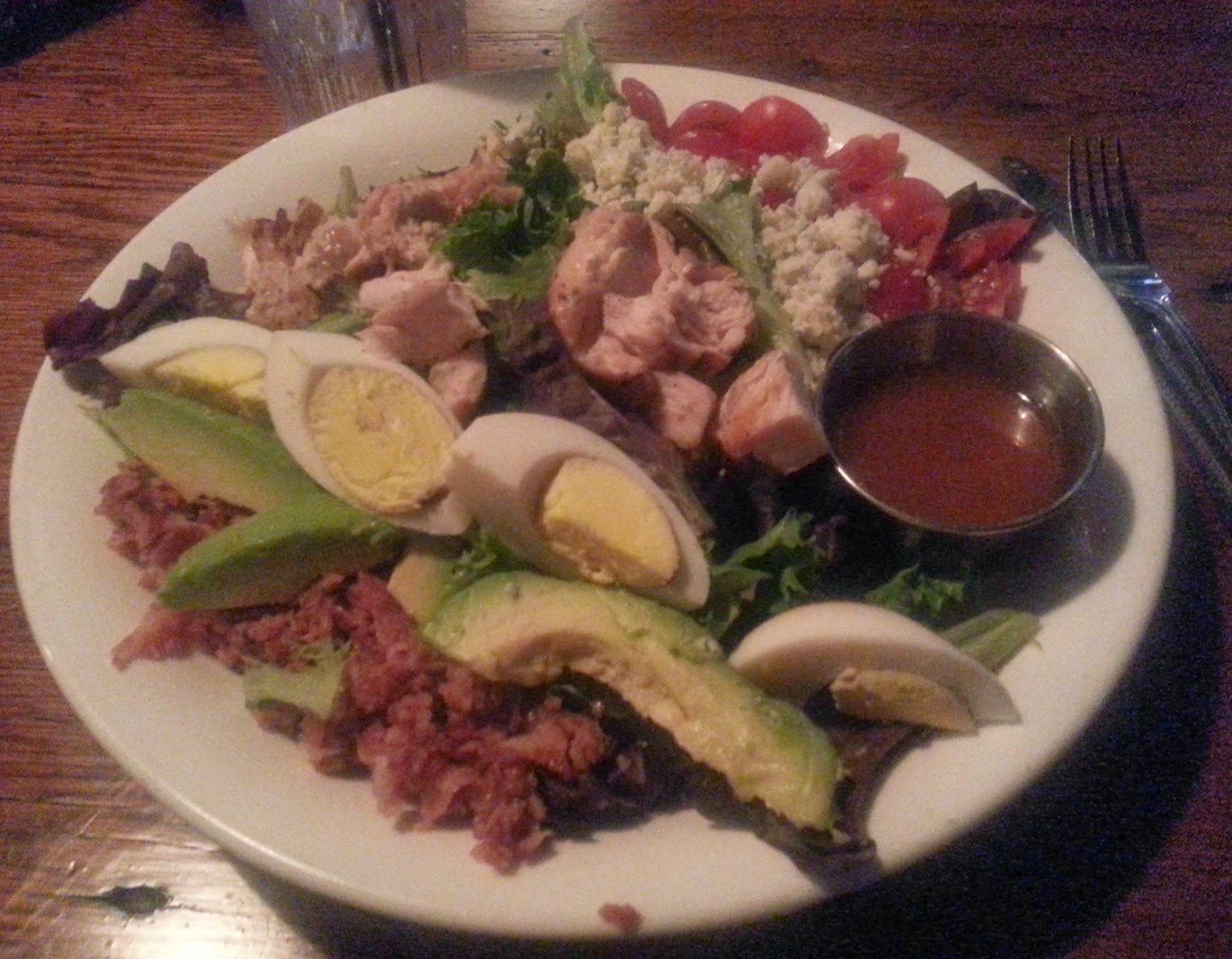 As usual, I laid out my race day outfit the night before. The forecast called for cloudy skies in the 40s, which made it difficult for me to decide what to wear. I wound up wearing Eastern Mountain Sports leggings, an old short-sleeved race tech tee, a long-sleeved Ideology tech zip-up and my trusty ASICS Gel-1170 running shoes. I accessorized with CEP compression calf sleeves, my Polar RCX3 watch, Nathan Shadow Pak and a BAMR headband. Since I was pretty serious about finishing in 2:30, I printed out a pace guide from marathonguide.com to wear as a bracelet. 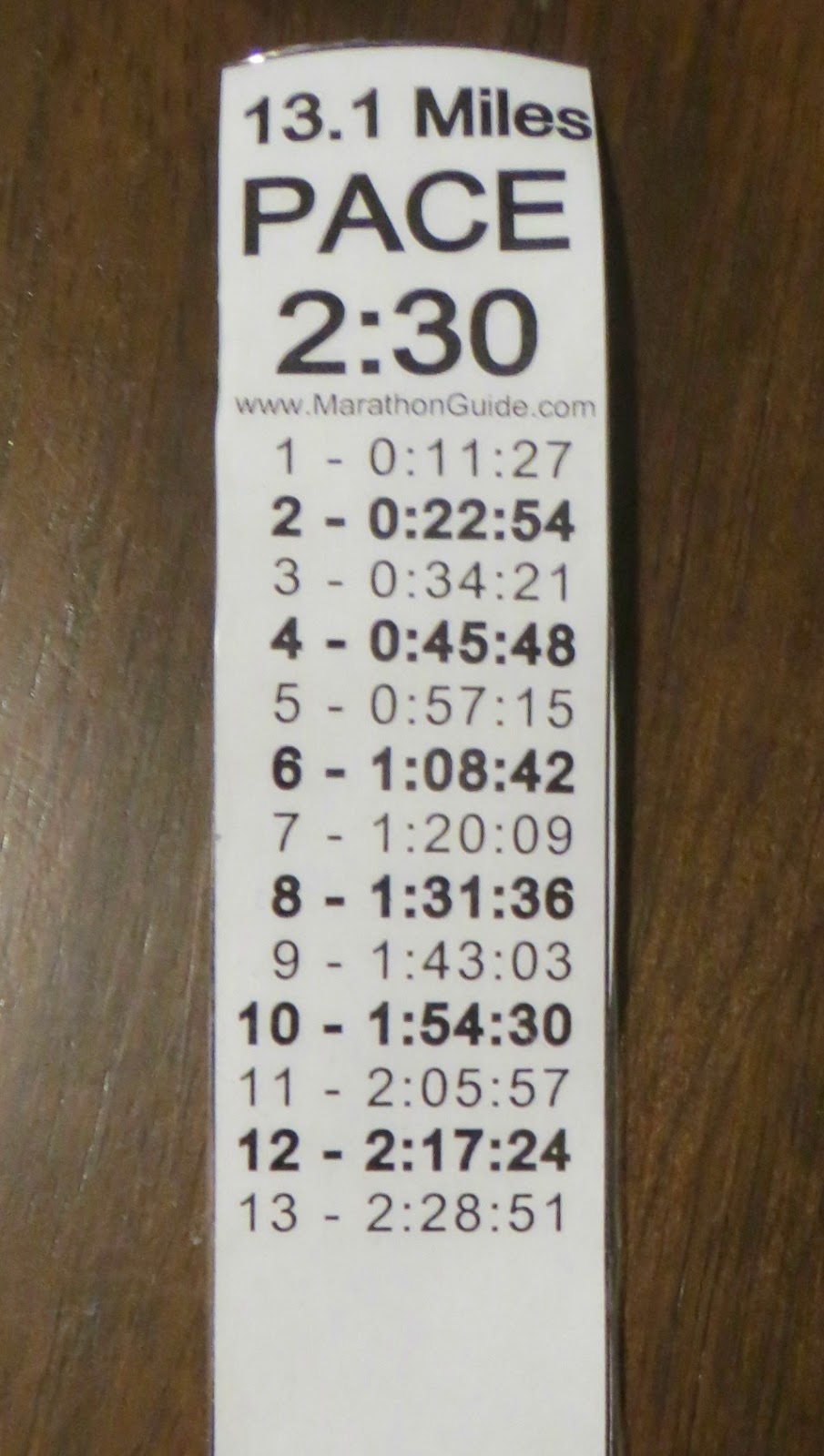 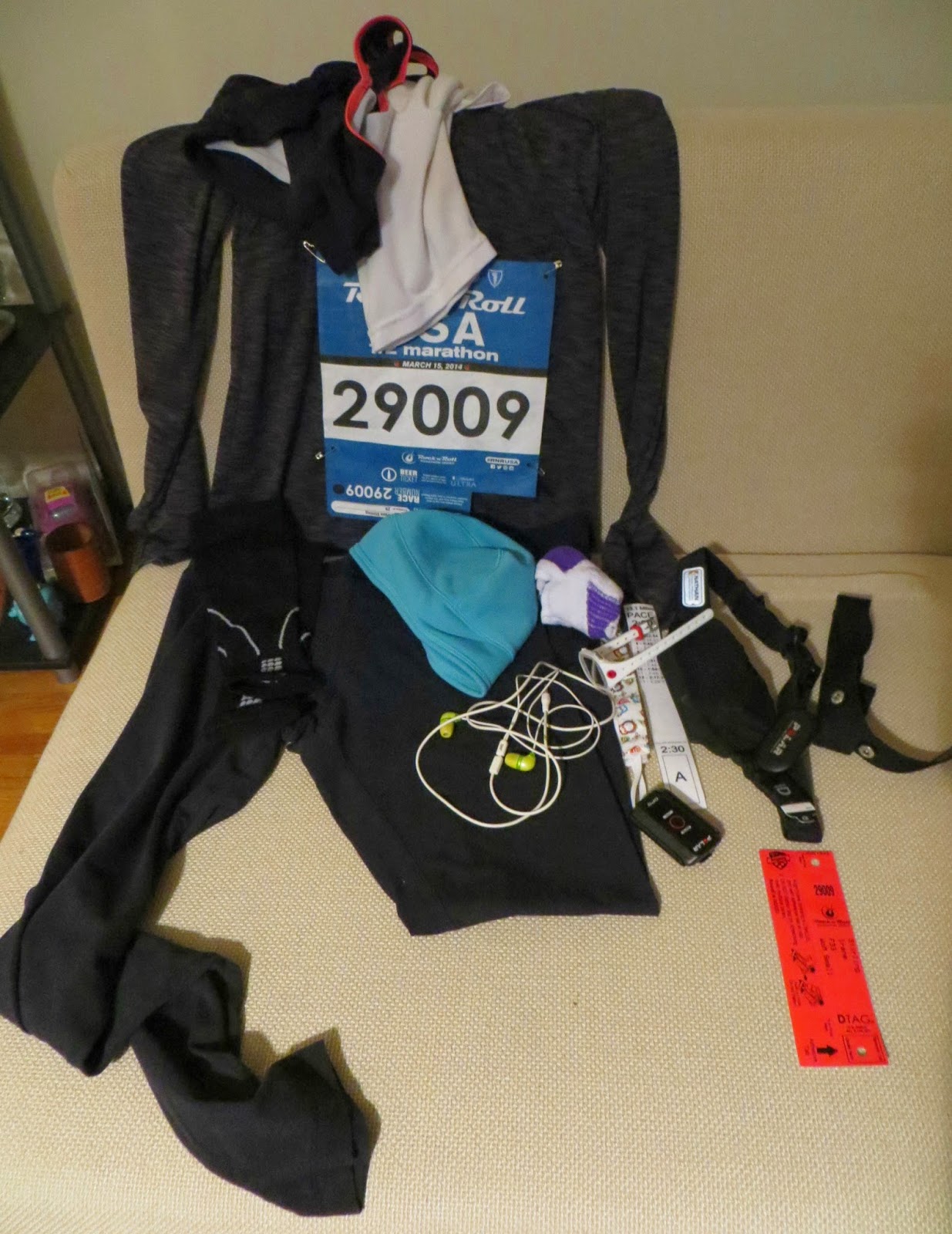 The alarm went off at 5:15 am Saturday morning. I had time to get dressed and eat my usual peanut butter and banana sandwich. Sorry if this is TMI, but one of the most important things I have learned in the past year and a half of running is that I need to PRP (pre-race poop) in order to finish races comfortably. So PRP, I did!

I left the house a little after 6:00 and arrived at the start line waaaay too early! I was in the third to the last corral, so I wound up having to go to the bathroom twice before I even got into my corral. I should have left much later. One good thing was that there were plenty of porta-potties at the starting line. 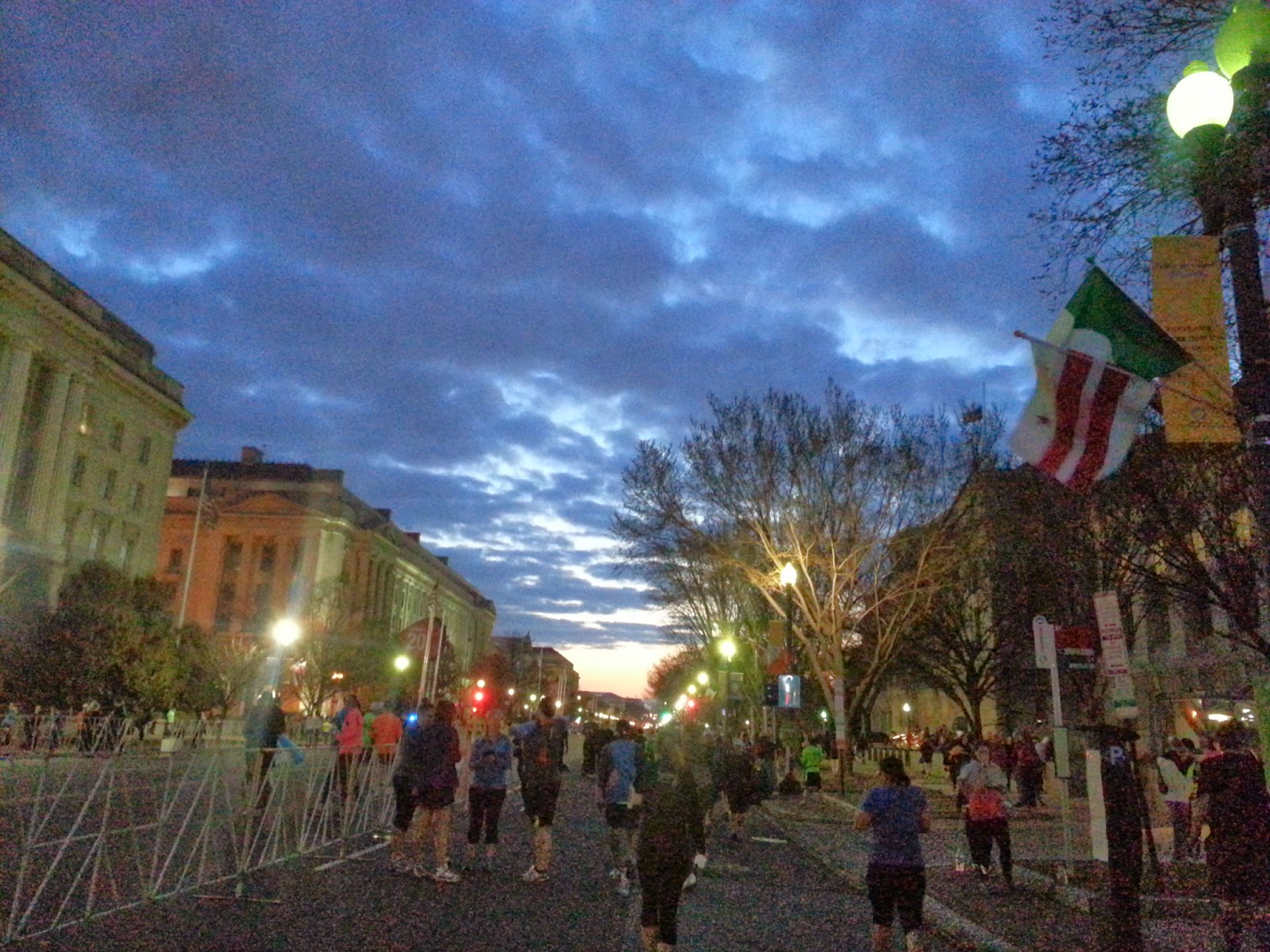 I also got a bottle of water and consumed a GU Gel before finally getting into my corral after the national anthem was sung and the first few corrals were off. My corral finally started at 8:10, which means I had been standing around for 40 minutes after the race started. 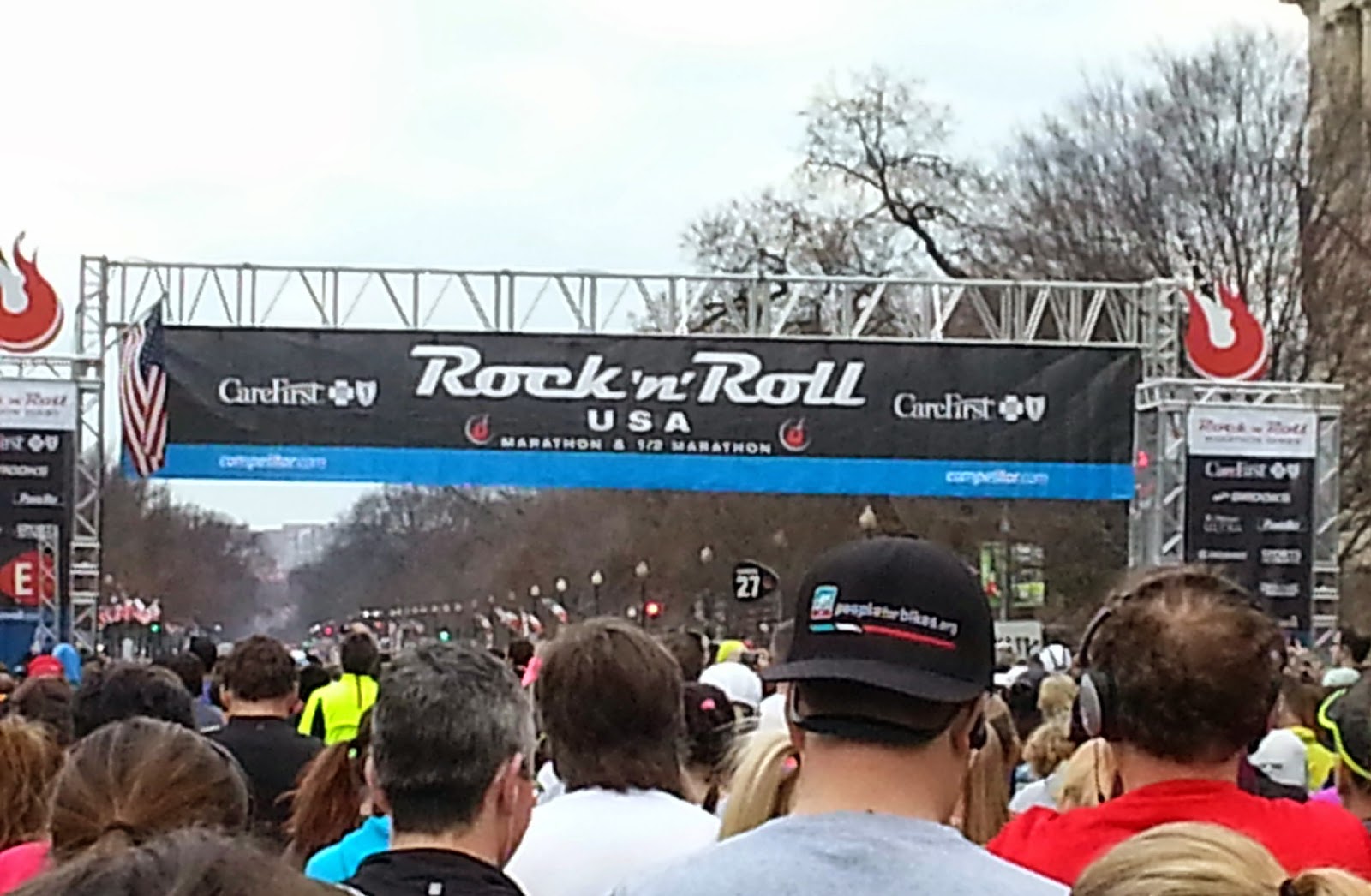 The race began near the Washington Monument and took us west, towards the Lincoln Memorial.

All of that waiting around meant that I immediately needed to pee again! Argh! I thought I could hold off on peeing until at least mile 6, but no, I really needed to go. After I passed the first mile, I went to the first available porta-potties, which had a huge line! I saw two individual porta-potties before the first mile marker that I should have totally gone to because there weren’t any lines. This decision pretty much cost me my 2:30 goal because I lost 12 minutes trying to use the bathroom.

I kept a pretty steady pace the remainder of the race. We headed across the Memorial Bridge and back into the District. 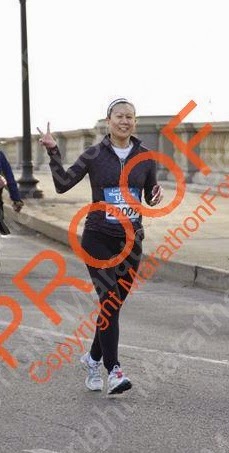 We went up Potomac Parkway, past the Kennedy Center. One of the things that makes the Rock ‘n’ Roll series fun and different is that there are live bands playing music at each mile.

For the next four miles, we continued up Potomac/Rock Creek Parkway towards Woodley Park. I took my time eating a packet of Sports Beans over these few miles.

After Mile 6, we headed up the one huge hill of the race. I slowed it down to a walk at the end of the hill.

We ran through Adams Morgan and Columbia Heights. At one point, I went by a pho restaurant and it smelled so good! After finishing half of the distance, I could have used some pho.

We passed Howard University and entered an area of town, which to be quite honest, I have never visited. By this time, I knew that I wasn’t going to make up enough time to reach my goal so I took off my pace bracelet and threw it away.

Continuing on through Bloomingdale and Capital Hill, I took the last bit of fuel that I had packed with me: another gel packet. GU was being handed out at the next water stop, so I took another half packet for good measure.

I actually felt good for the rest of the race, but now looking at my time, I can see that I wasn’t actually keeping up my pace!

Mile 12: 13:17
We finally approached RFK Stadium and the finish line. 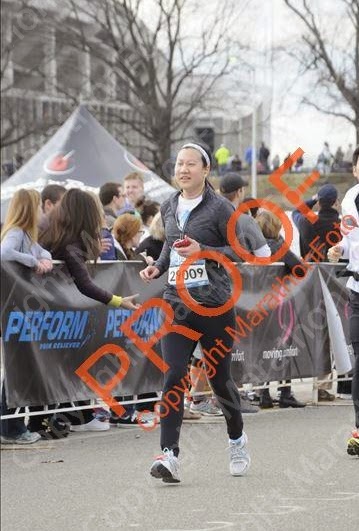 As I neared the finish line, I heard someone yelling at me. I couldn’t understand what they were saying, but I turned to look and saw Raisin Bread! Awww, it was so sweet of him to surprise me at the finish line! I had no idea he was going to be there. 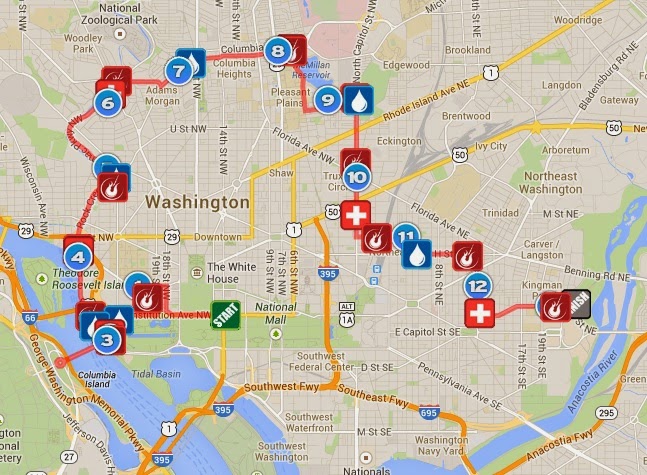 The finish area was not very crowded and it was not too hard for me to maneuver my way out. There was a stage with a live band for us to enjoy at the finish. 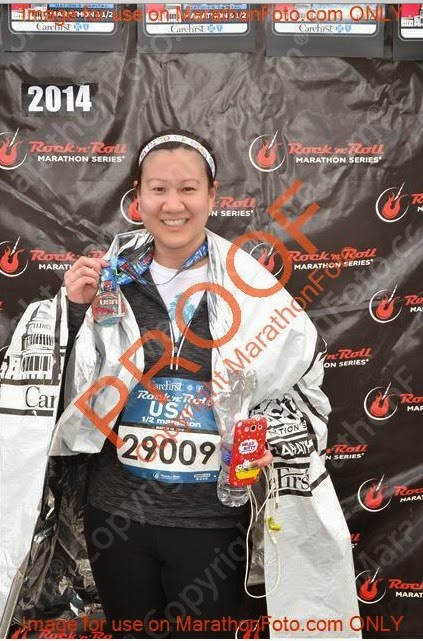 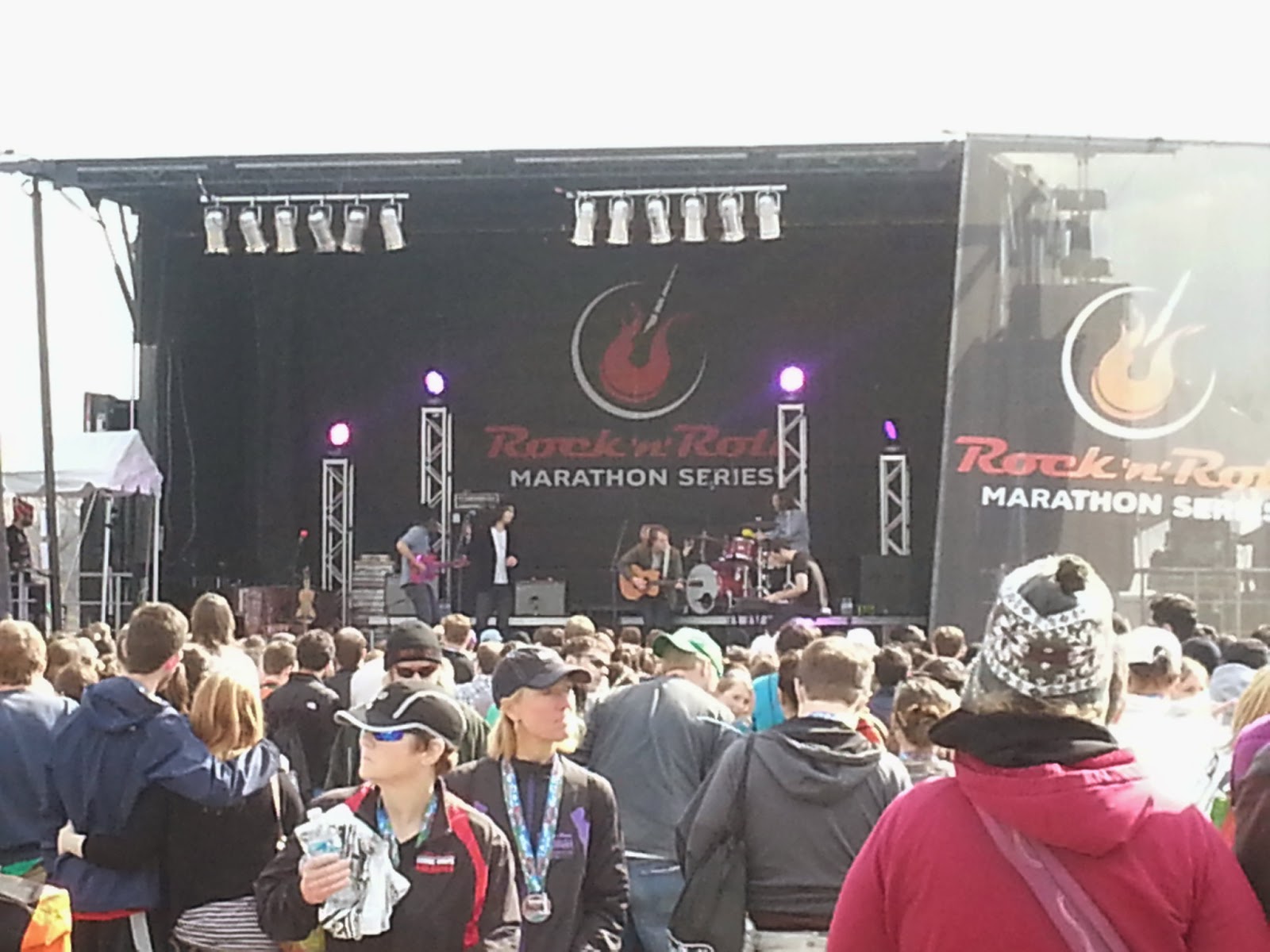 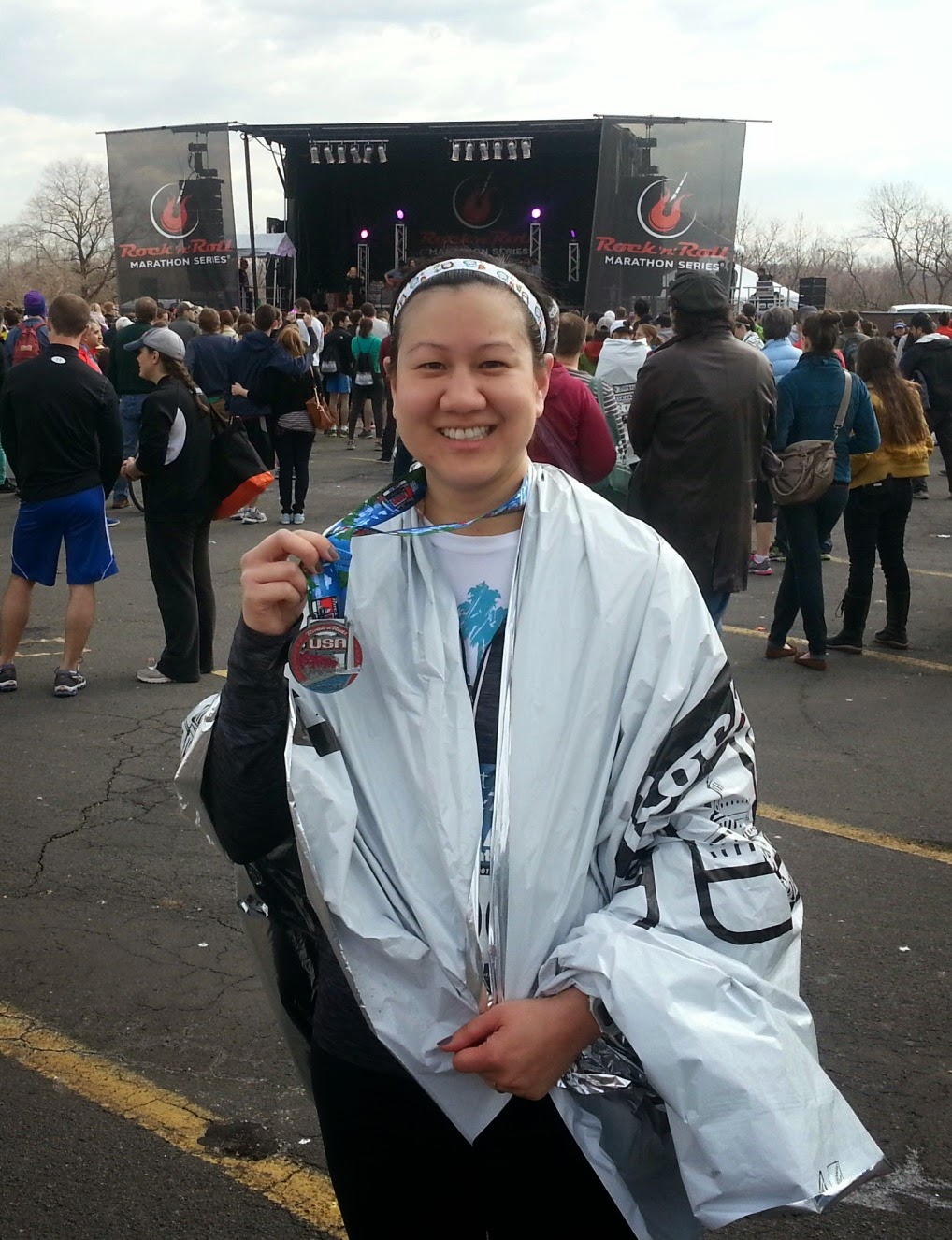 Although I did not accomplish my time goal, I did shave a good 12 minutes off my previous time! 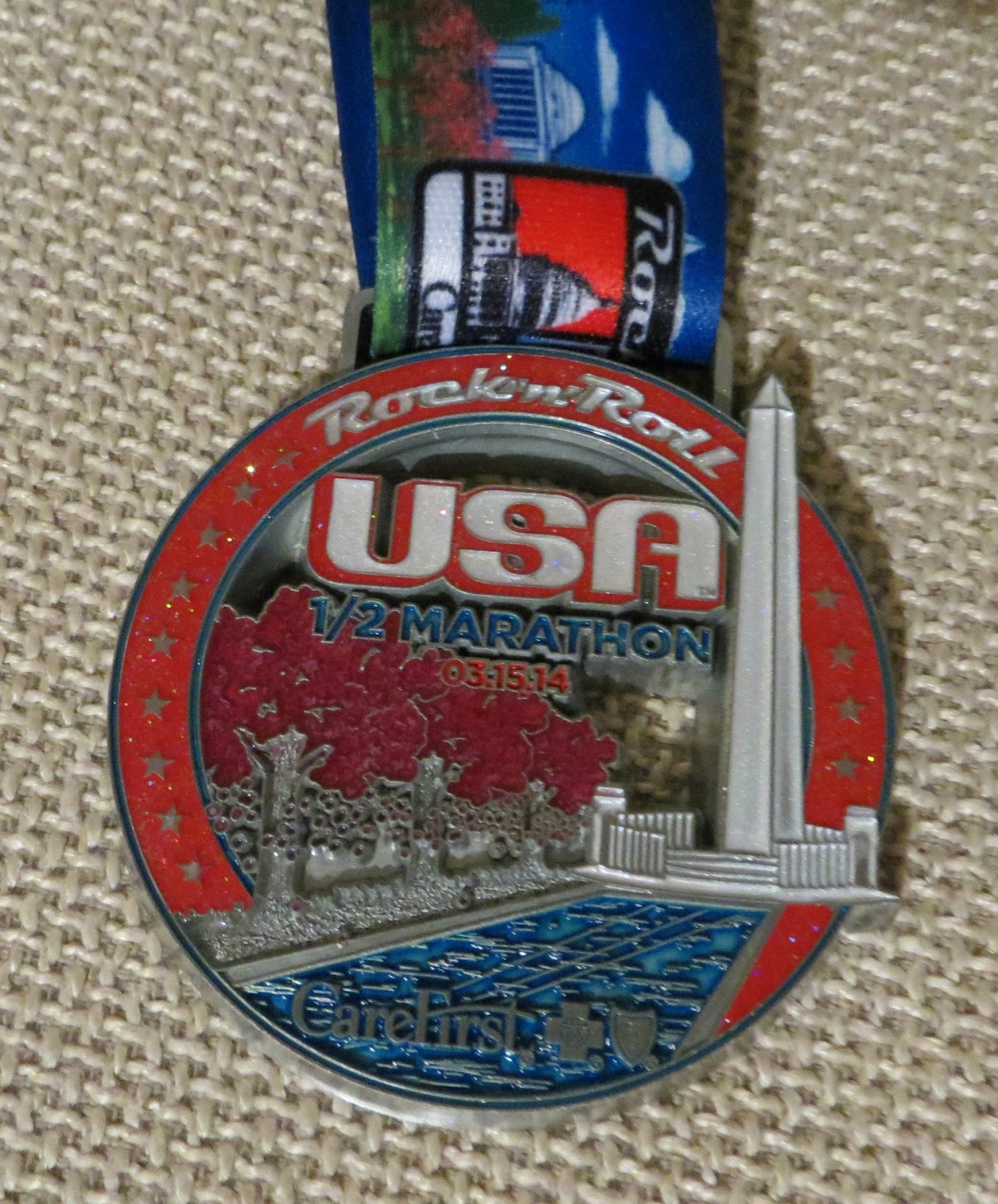 While this wasn’t my favorite race, I thought that it was pretty well-organized at the start and finish lines. There were plenty of volunteers at the water stations. Two things the race was lacking for me was crowd support and on course porta-potties.  I liked that I got a chance to run through a lot of areas of the city that I normally don’t see. And what better way to finish a race than to see your husband’s beaming face!!