After a short drive from the city to Napa, we checked in to our hotel and had a few hours to rest before it was time for our dinner reservations.

By the way, if you missed my first post on my Northern California Adventures, check it out here.

For dinner, we visited the very cute and very busy The Girl and The Fig in Sonoma. To start, we shared “The Works” cheese platter, which came with a selection of three cheeses, cured meats, seasonal fruit, house-made fig cake, spiced nuts and a baguette. I shared the duck confit with my friend, and it came with farro, roasted parsnips, kale and black pepper vinaigrette. It was amazing! 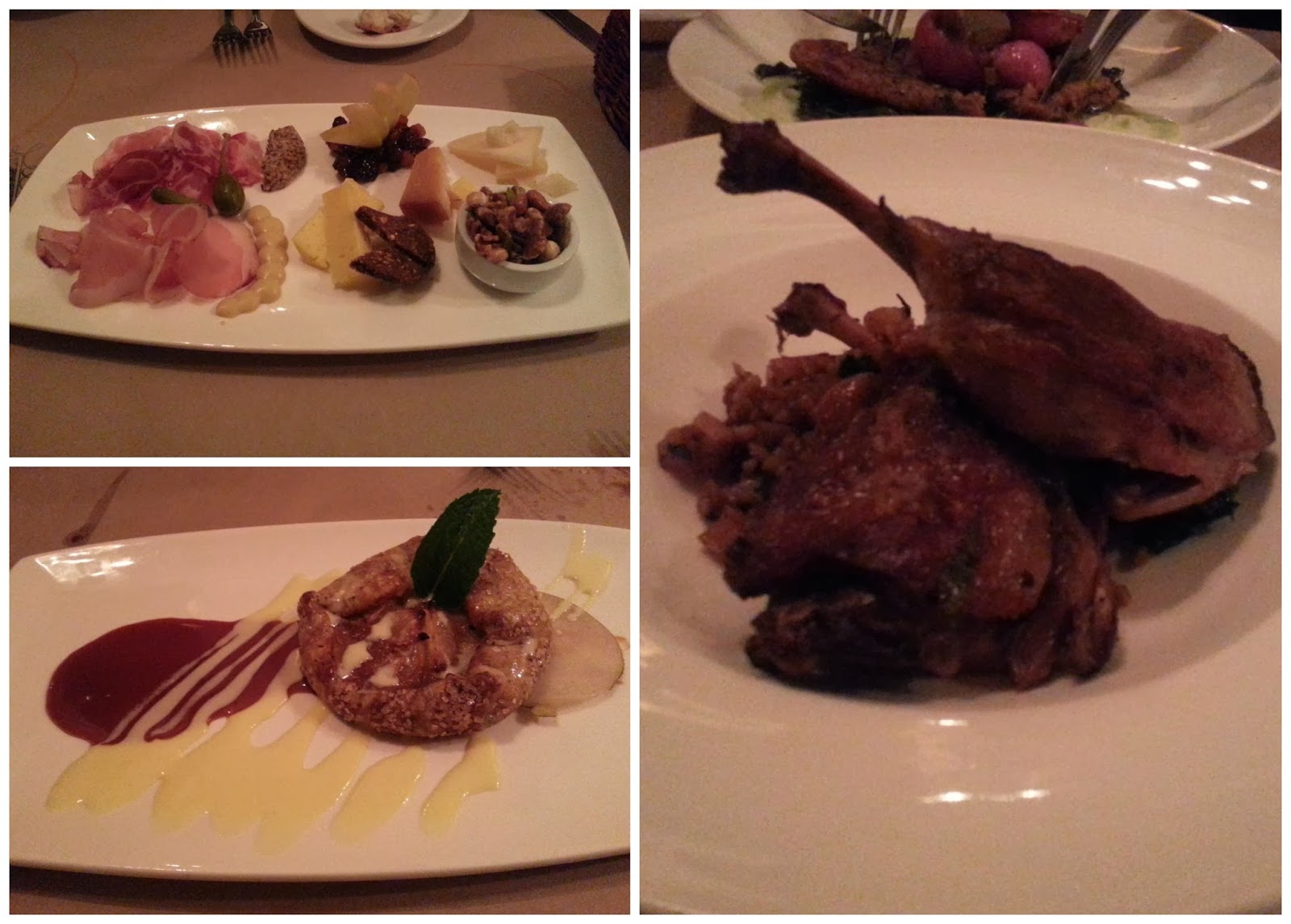 For dessert, we split the asian pear crostata with buttermilk creme anglaise and spiced caramel. Everything was so delicious and it was hard to decide what to order.

The next morning, we were up bright and early to attend a 10 am sparkling wine tasting at Mumm Napa. I’m not much of a sparkling wine/champagne person because I tend to get really bad headaches from drinking champagne, but I must admit that this tasting was a lot of fun.

We shared two different levels of tastings and some of the wines we tried included the Brut Reserve, Brut Prestige and the Brut Rosé. 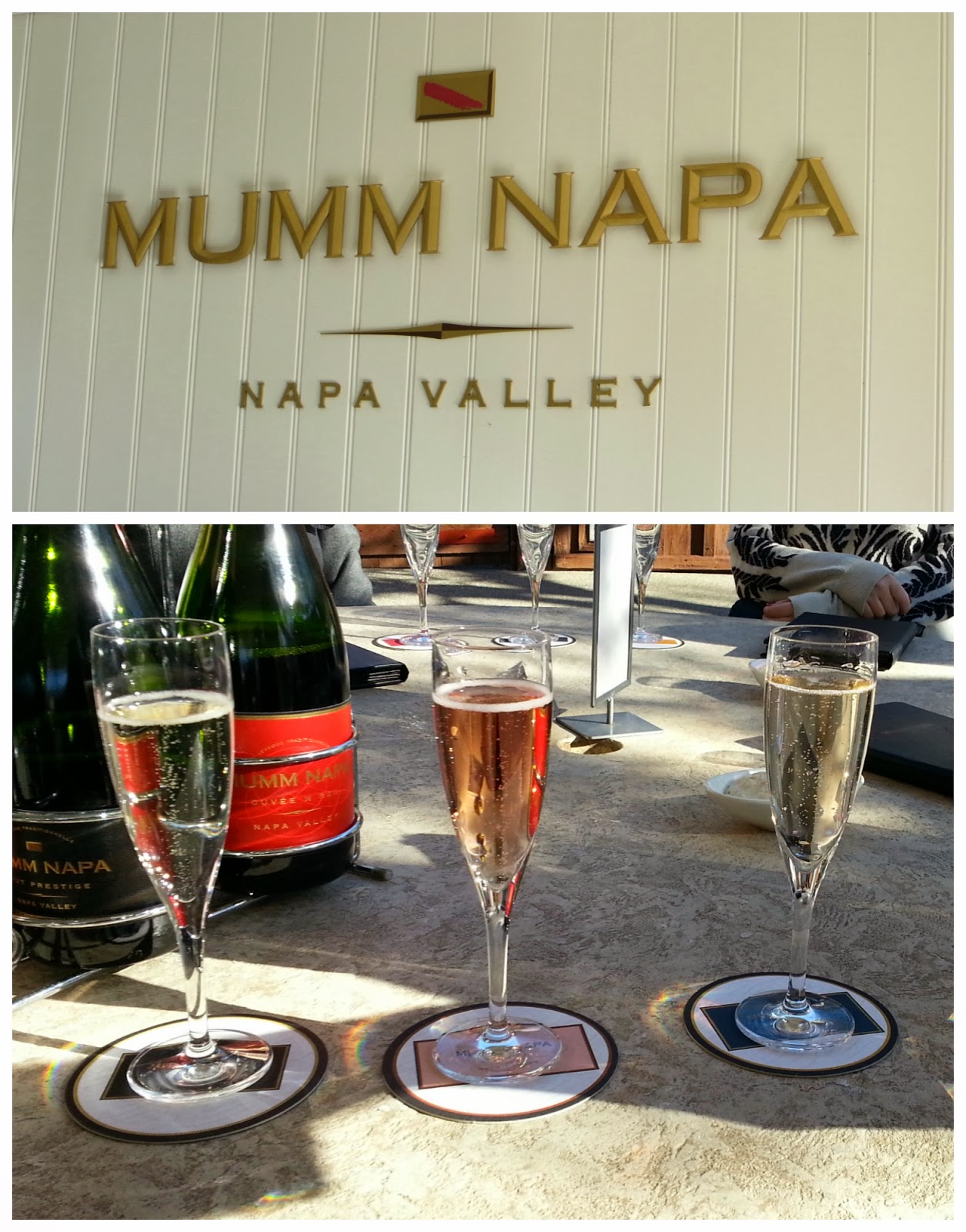 We also got a couple of “bonus” tastings including the sparking pinot noir and Carlos Santana’s Supernatural Rosé.

After our fill of sparkling wine, we had an early lunch at Bottega. I was so looking forward to dining here and tasting some of Michael Chiarello‘s food!

First off, the ambiance was amazing! I am completely obsessed with their brass water goblets. 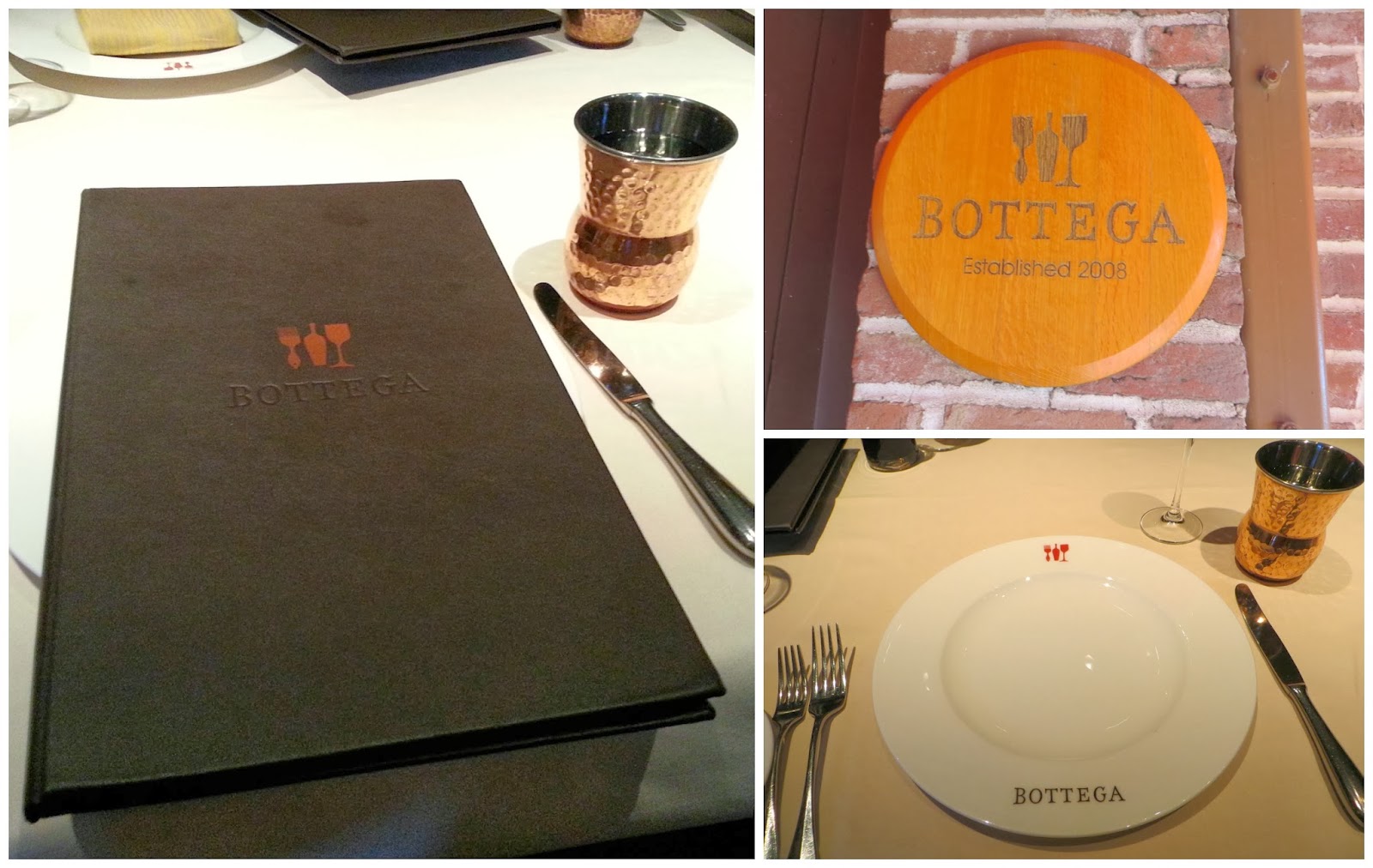 Our party was seated in a private dining area, which just happened to be in the wine cellar! 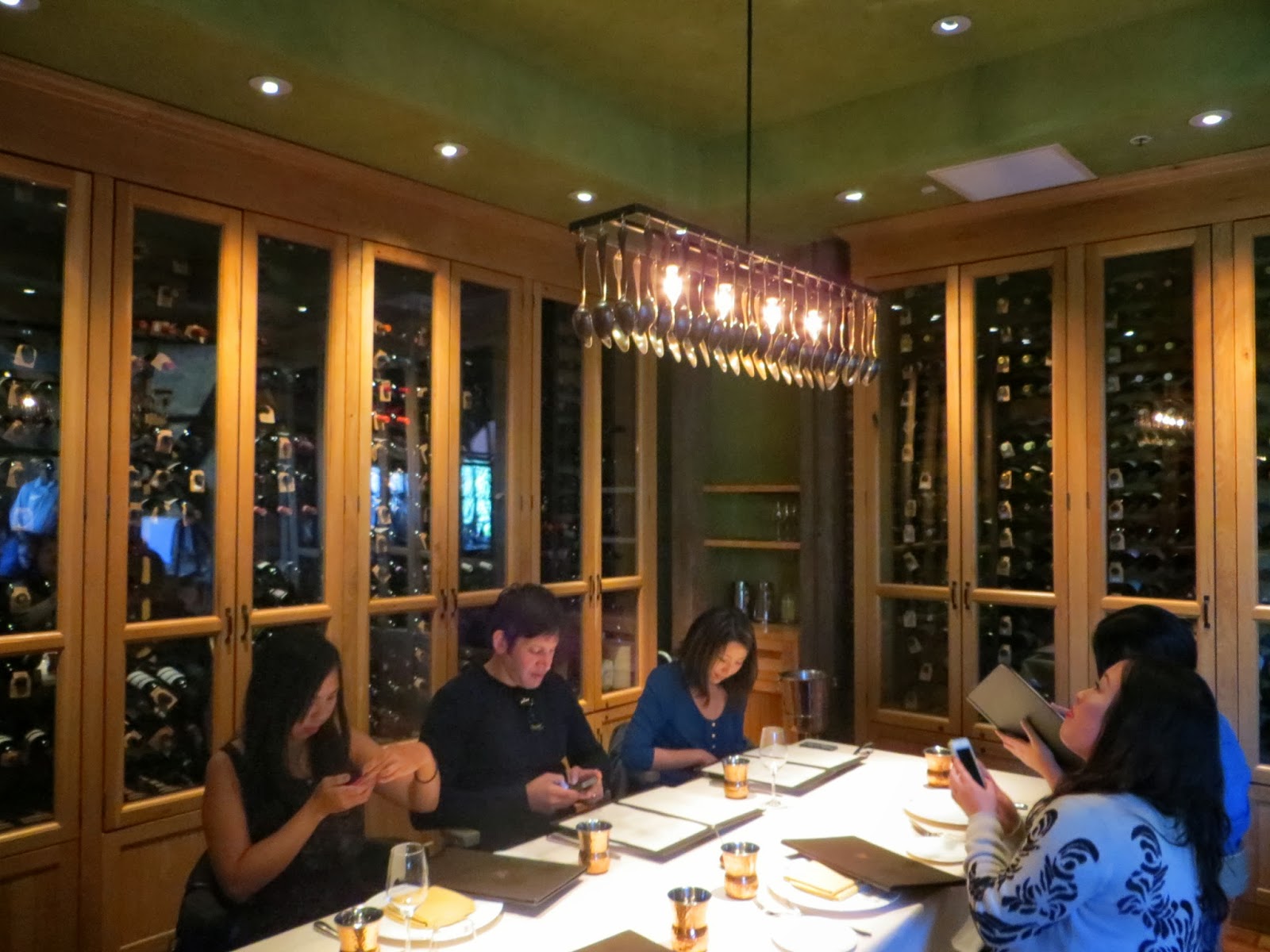 I went all out and continued my day with a yummy peach bellini. My friend and I shared a bunch of dishes, and we also shared a charcuterie plate with the table.
To start, we had the polenta under glass with caramelized mushrooms and balsamic game sauce. Very rich and creamy! Next, we shared the shaved Brussels sprout salad with Meyer lemon dressing, toasted Marcona almonds, egg and Pecorino cheese. 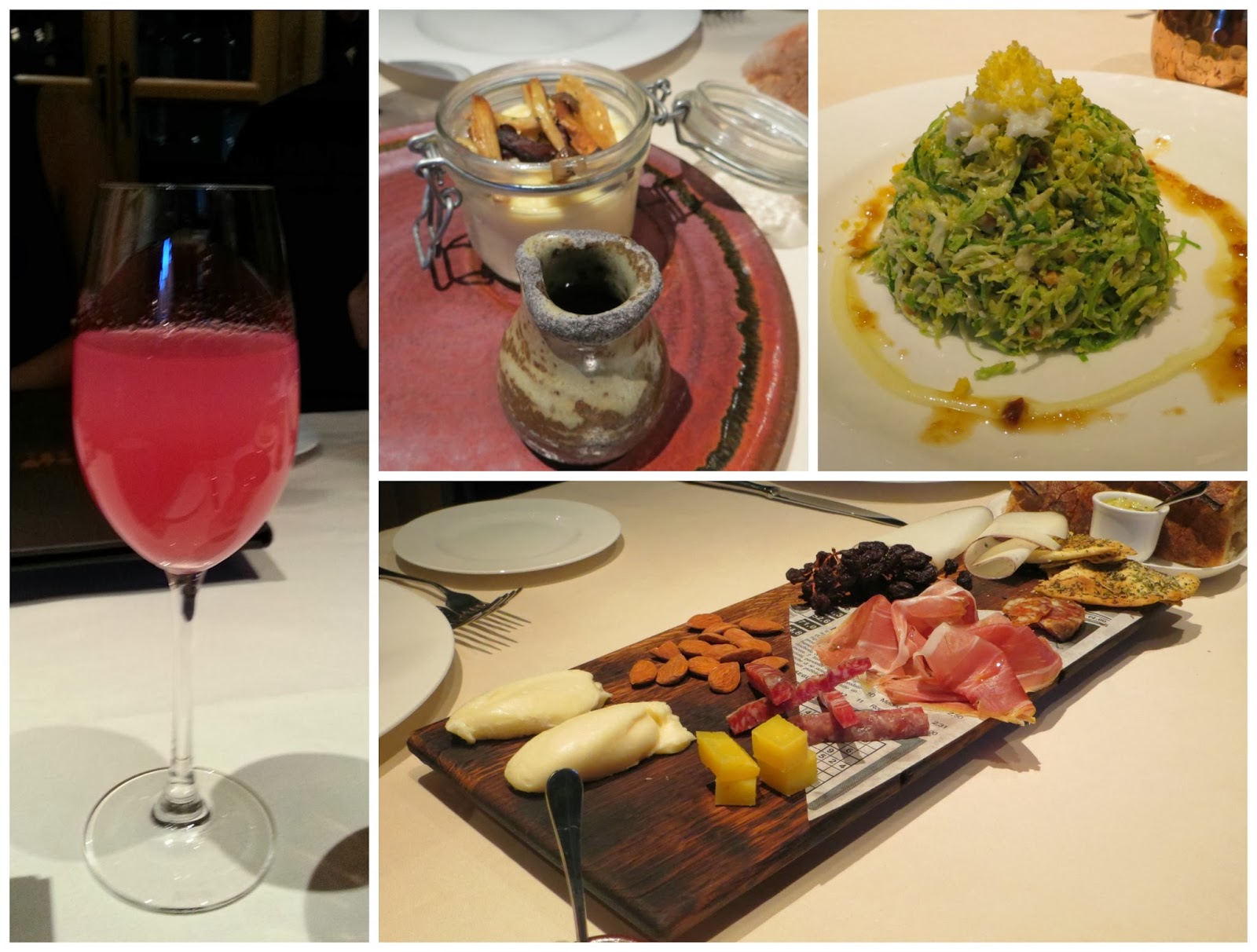 For our entree, we had the most decadent dish: cavatelli with lobster and sea urchin. I want to eat this again right now! 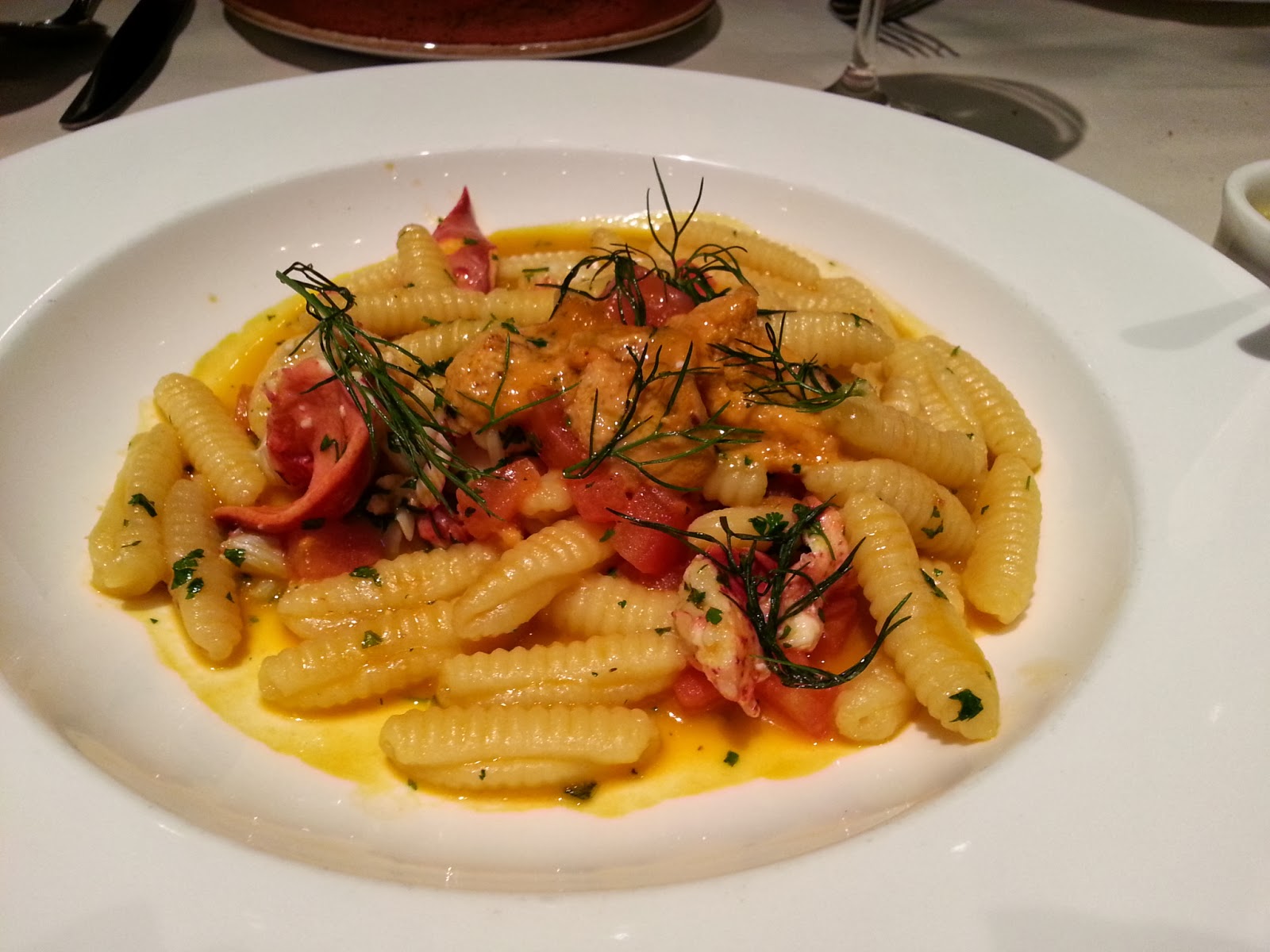 As if we hadn’t stuffed ourselves silly already, we had to head across the way to Bouchon Bakery. I was a good girl and only purchased a lemon macaron and an almond croissant for breakfast the next morning. 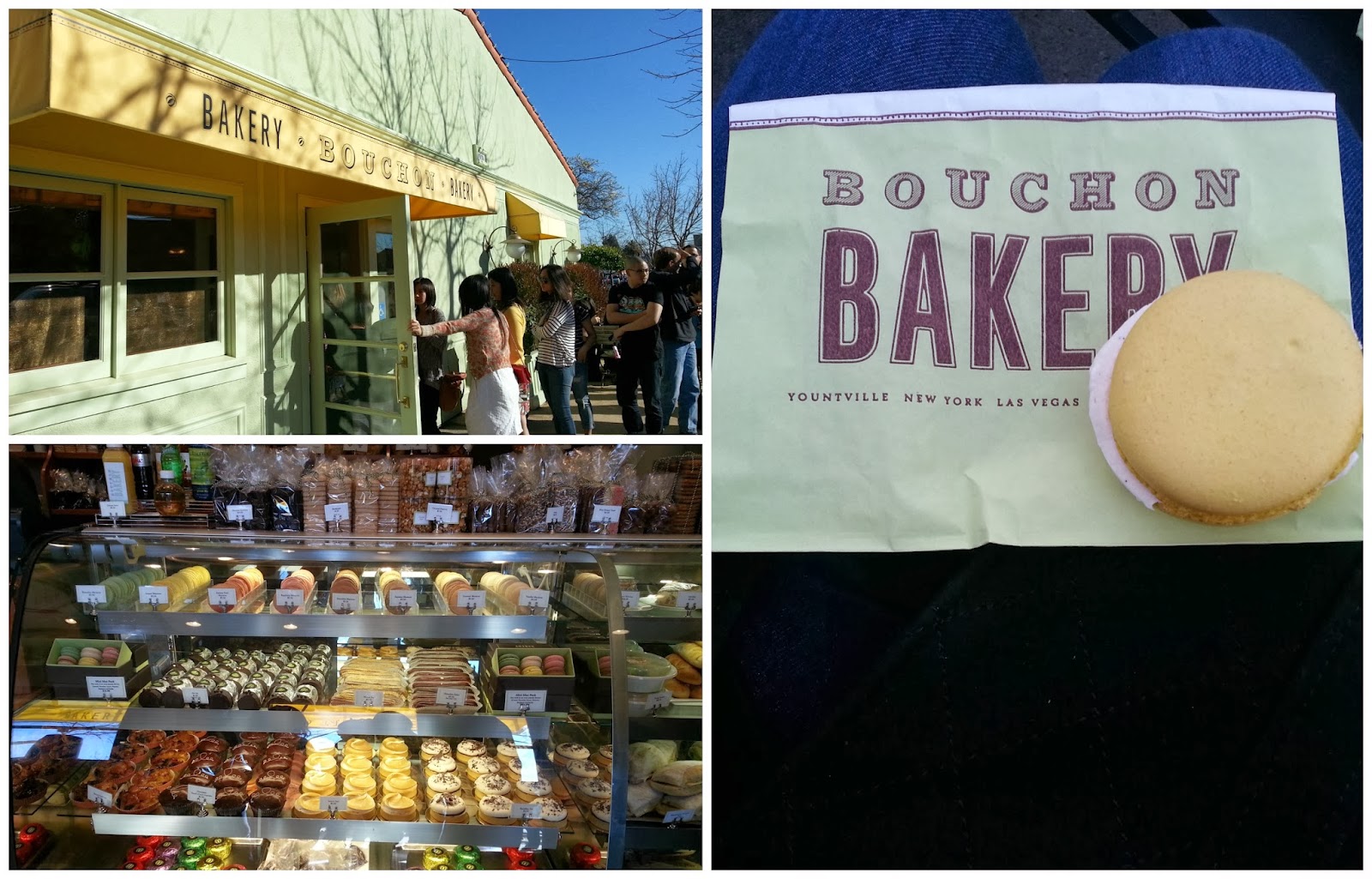 Next up was a wine tasting at Ma(i)sonry, which didn’t turn out exactly as we hoped. Upon arrival, we were told that everyone in our party had to do the same tasting and that we all had to spend a minimum of $35 each. This is something that we were not told when we made our reservations. I found this to be entirely uncool. We decided to just order three bottles of wine to share.

Our first bottle was Lail Vineyard’s 2012 Blueprint Sauvignon Blanc ($40). Over the weekend, I confirmed that I am not at all a fan of Sauv Blanc. Our second bottle was more my speed. It was Blackbird Vineyards’ 2012 Arriviste Rosé ($25).

For our final bottle, we went up a notch on the price point and purchased Tor Kenward Family Wines’ 2011 Tor Beckstoffer To Kalon ($150). It was the most expensive bottle of wine I’ve ever had and it was quite delightful.

Ma(i)sonry also is home to a gallery with the space filled with lots of pieces. I loved the sheep. Overall, I thought the setting was gorgeous, but I wasn’t pleased with the situation I described earlier. 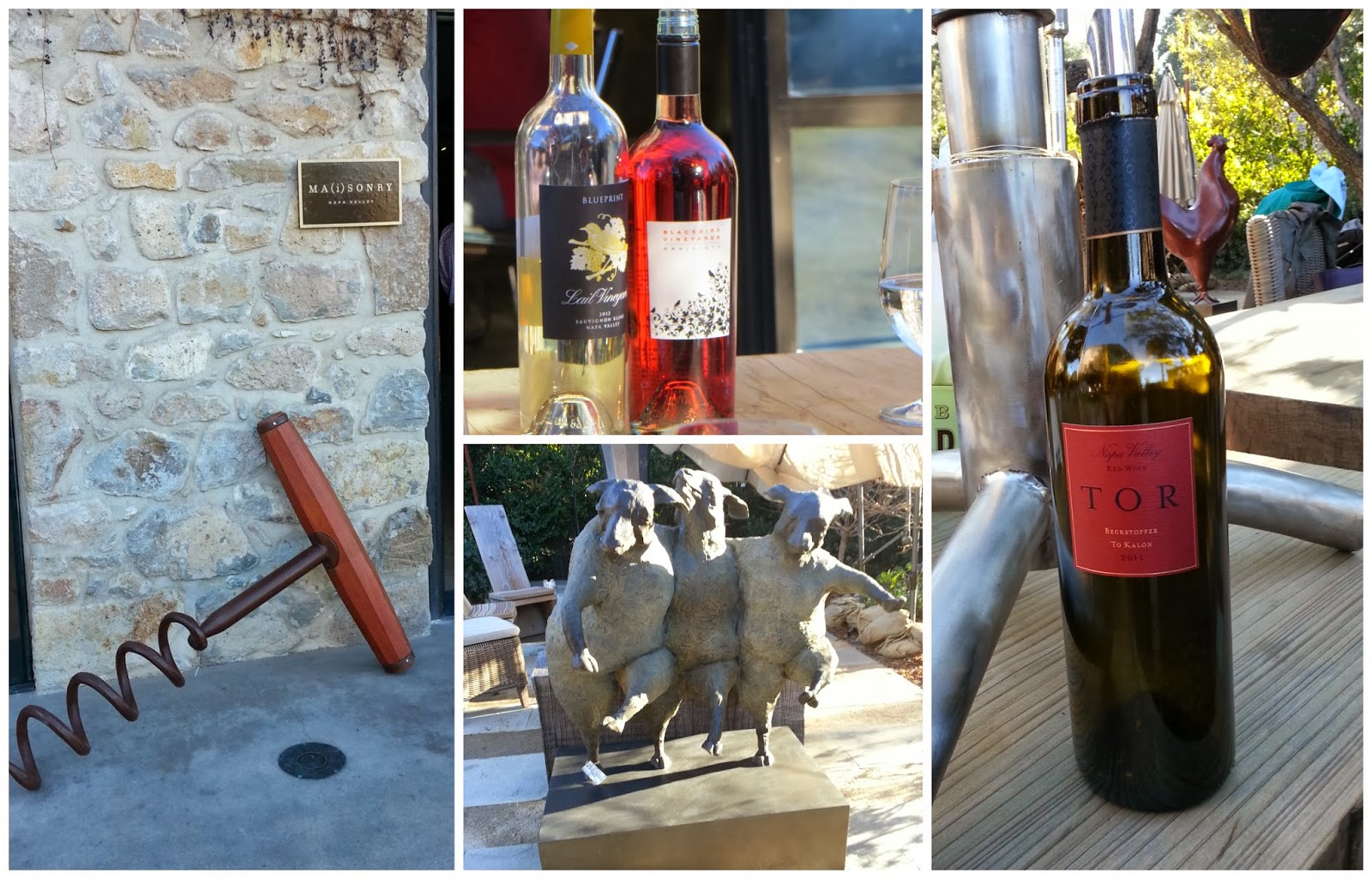 I skipped out on our final tasting of the day. I had already had enough to drink and I didn’t really want to do another champagne tasting. I did, however, get to enjoy the beautiful terrace of Domaine Carneros. The building itself is styled like an old French chateau. So pretty! 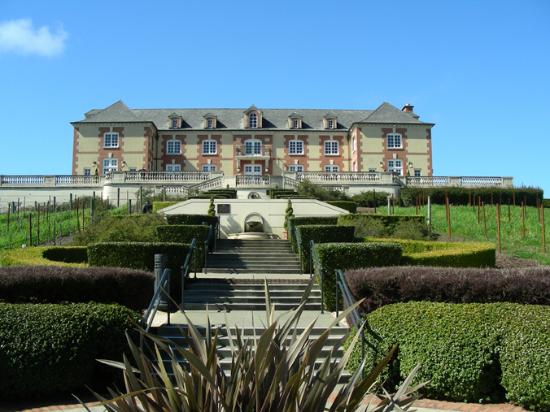 This photo of Domaine Carneros is courtesy of TripAdvisor
Even though I abstained from the final tasting, there were clear, sunny skies, another gorgeous setting and pleasant company for me to enjoy. 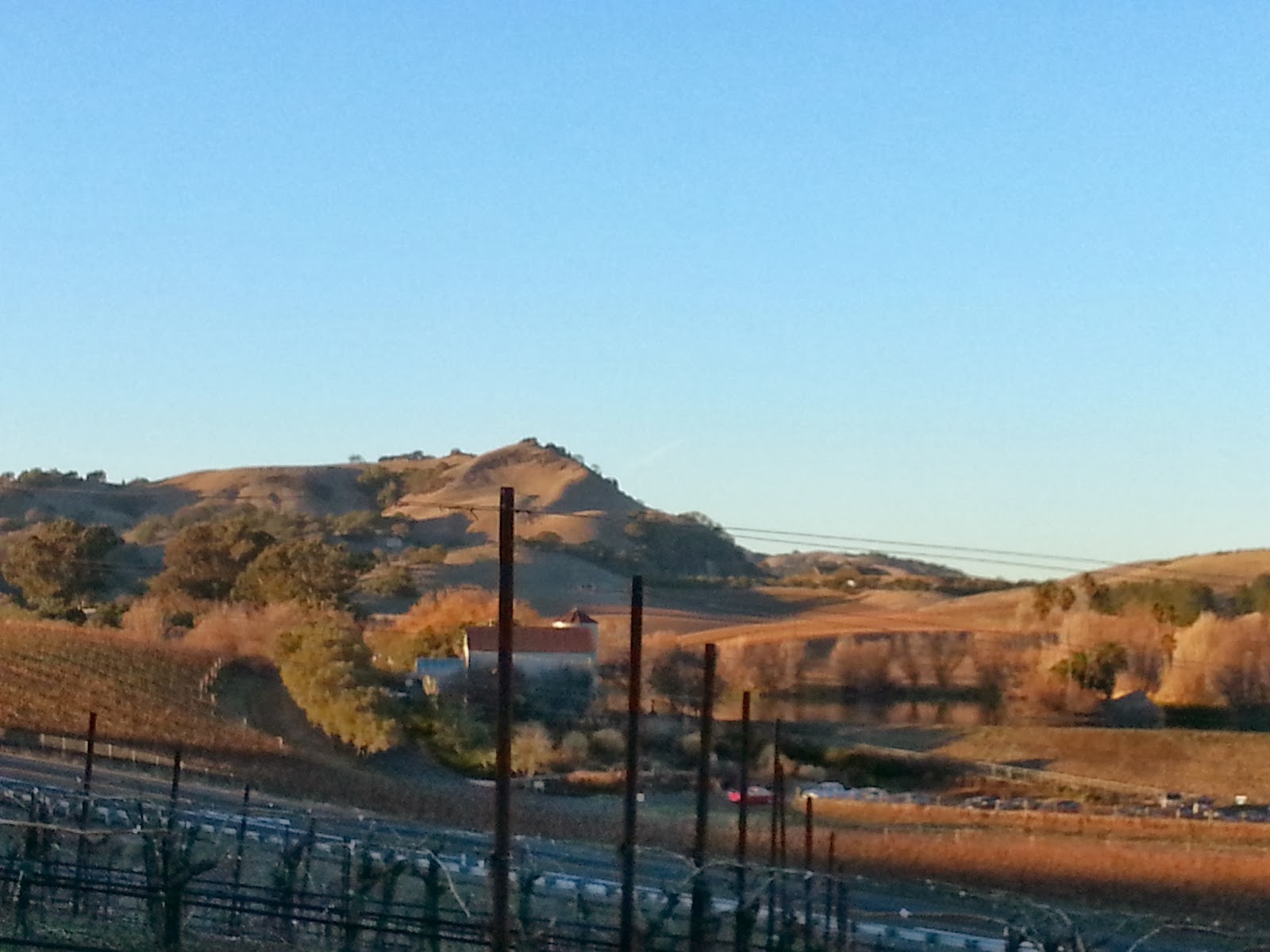 Who is ready for the happiest 5K on the planet? The Color Run is back with its 2014 Kaleidoscope Tour and promises to be bigger and more colorful than ever. 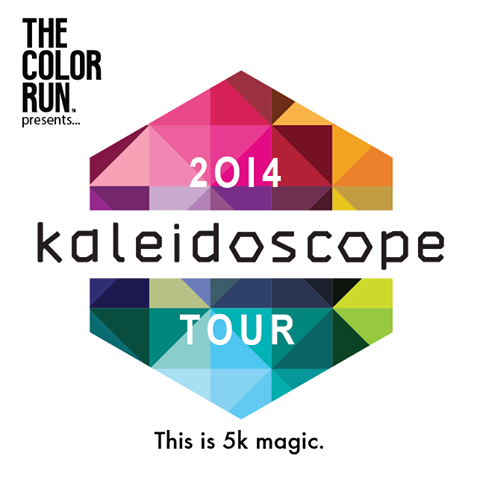 I am a sucker for themed runs, and after finishing two last year, I can’t wait to complete The Color Run, which I consider to be one of the originators of the themed race. In fact, I am already signed up and ready to go!

This year, The Color Run will be holding events in new cities and will feature lots of new swag including new t-shirts, headbands, wristbands and sling bags for all registrants. 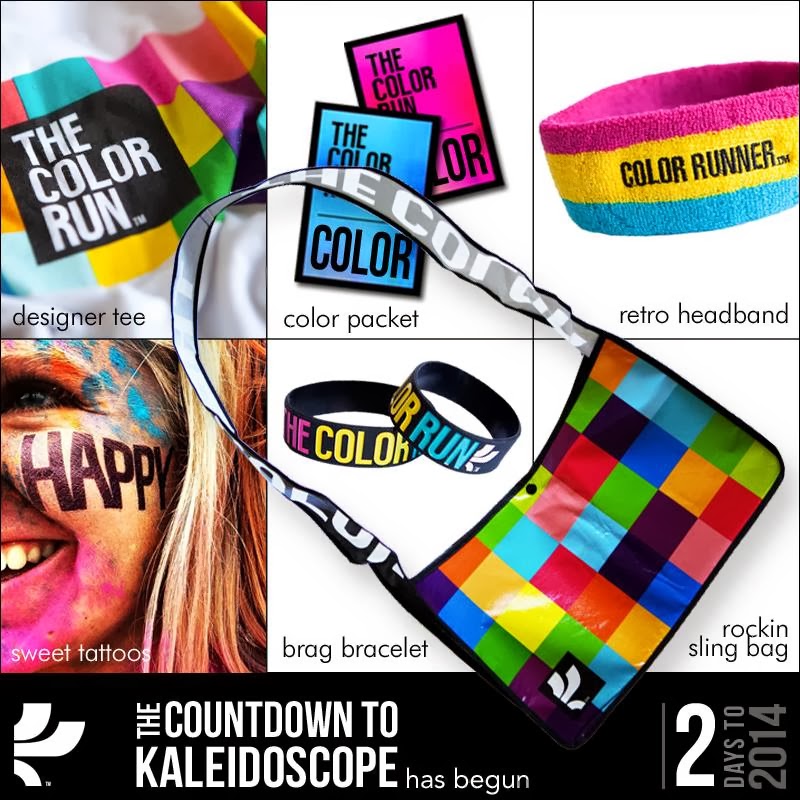 I am happy to be able to offer you a discount for $5 off registration to The Color Run in any city. Just type in the code COLOR5OFF at the time of registration. Important: code cannot be retro-actively applied. Type in the code. Do not copy/paste. Not valid on flash city sales. 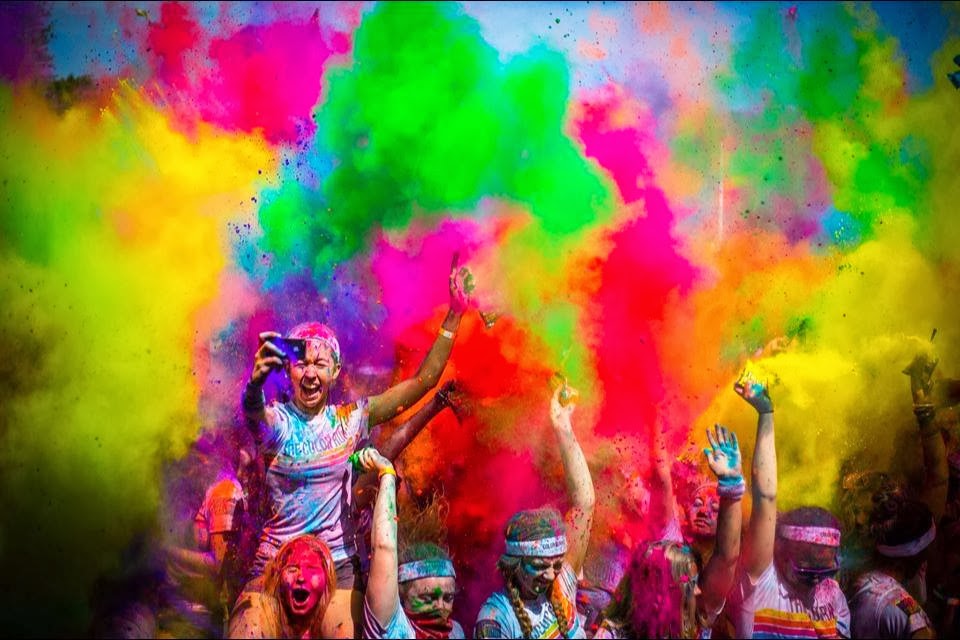 To find The Color Run event nearest you, check out the current tour dates. Races around the country are already scheduled, and new dates are added regularly.

To learn more about The Color Run, visit them at:
TheColorRun.com
Facebook.com/TheColorRun

*Photos courtesy of The Color Run*

Disclosure: The Color Run provided me with two complimentary registrations to the run of my choice. No compensation was received. All opinions are my own. Read my full disclosure here.

Hello, friends! I just came back from a nice trip to Northern California. It was lovely. Temperatures were in the 70’s and the days were filled with bright sunshine. I got to see lots of good friends, drink lots of wine and eat good food. What a difference a flight back home makes because it’s been snowing all day long and it’s going to be terribly cold for the remainder of the week.

At least I have my sunny photos to share with you to remind me of the warmer parts of this country!

After two flights, I made it to San Francisco, where I went on a search for my missing suitcase, which delayed me by about 45 minutes. I finally arrived in the city (with my luggage), quickly checked into my hotel and ran to the Ferry Building. I was so hungry! And I had dinner plans in about 2 hours. I needed something to tide me over that didn’t completely stuff me.

Chris Consentino’s Boccalone was just the ticket. Mmmm….meat. I ordered the salumi cone, which was just enough food to keep me from eating everything in sight before dinner. 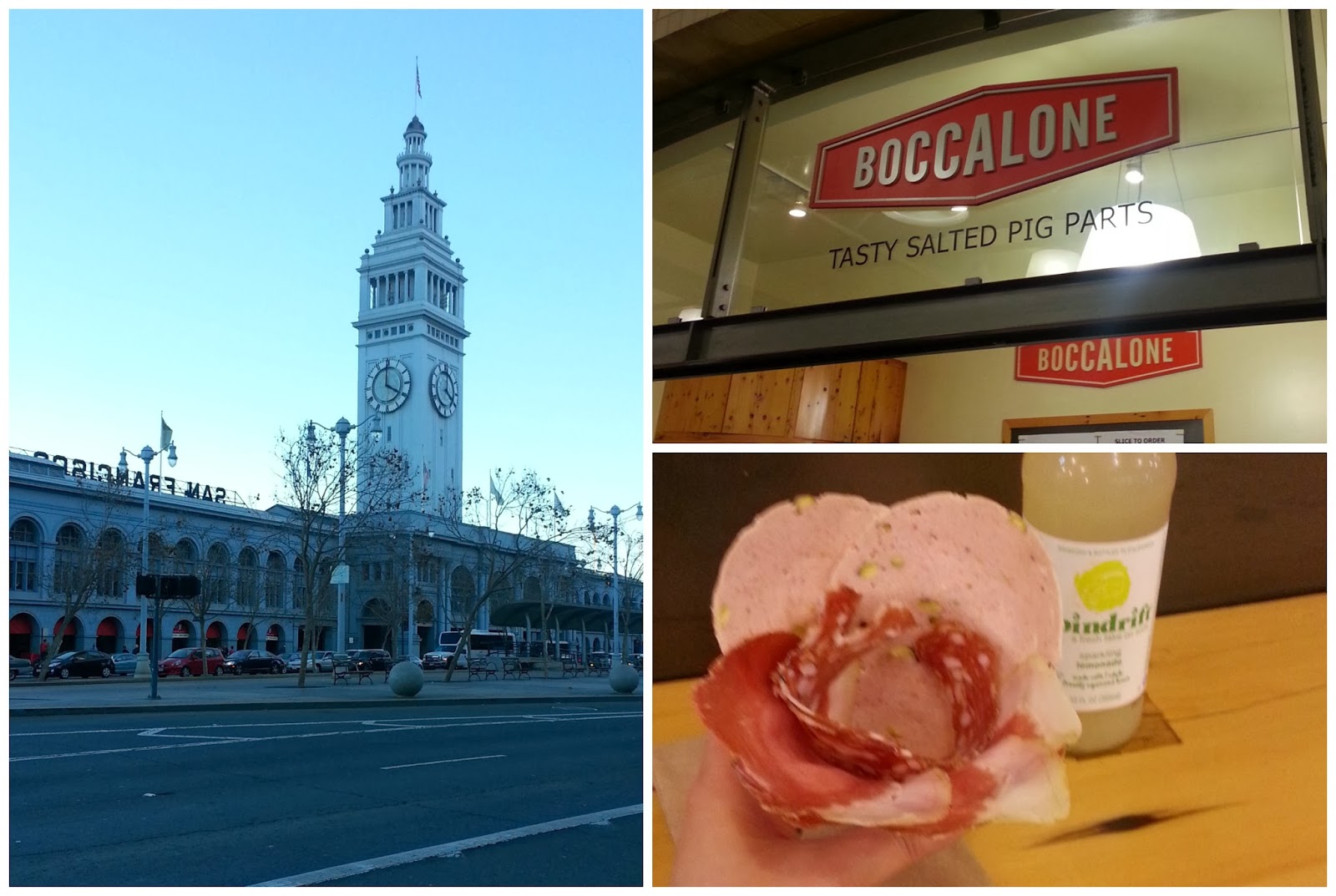 I had a product review write-up that needed to be submitted, so I headed back to the hotel to complete it. I decided to stay at a hotel for one night to relax and get some much needed alone time. Loved it. 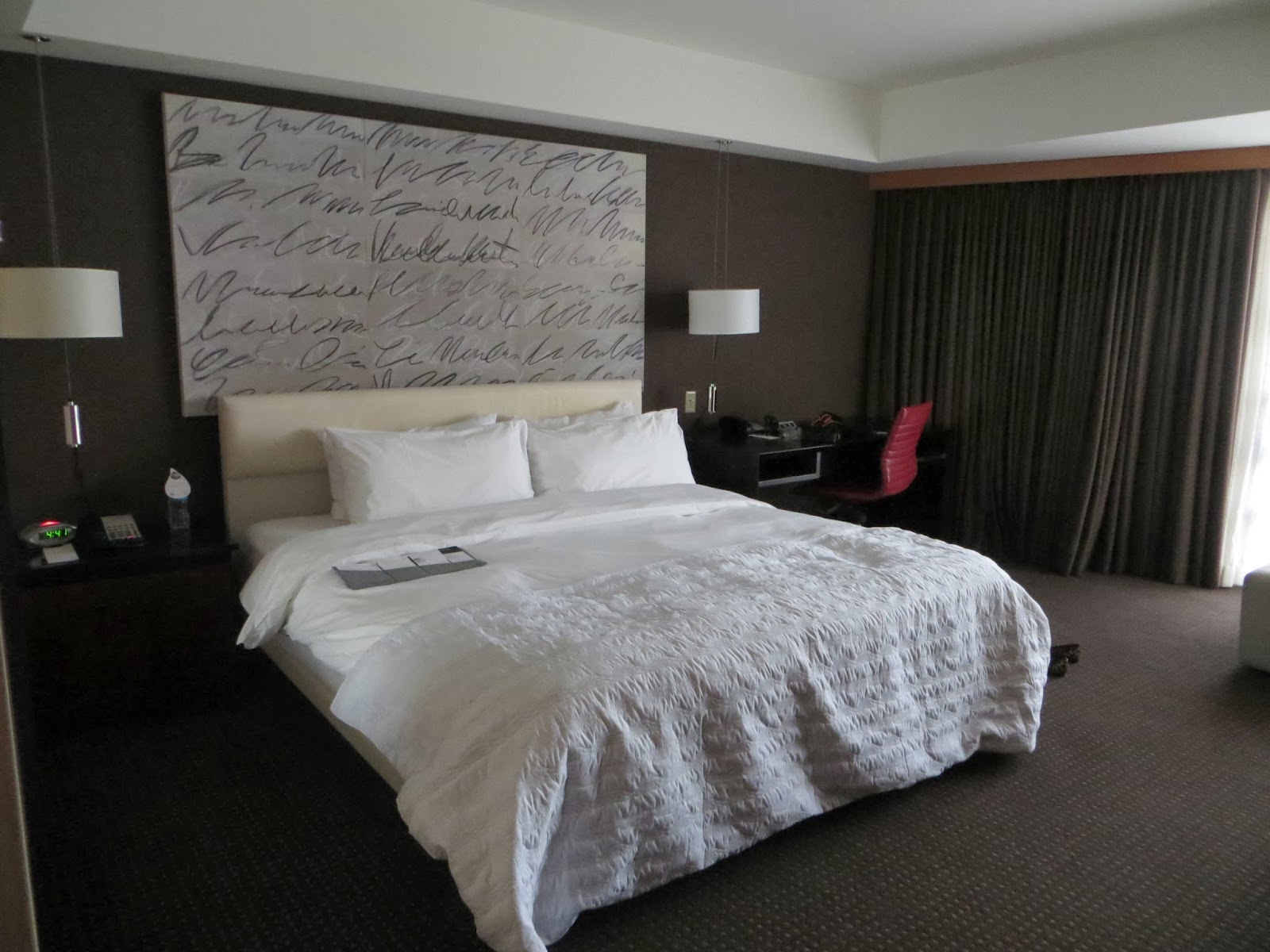 I stayed at the Le Meridien Financial District and got upgraded (yay, SPG!) to a corner room that gave me some gorgeous views of the Transamerica Building, Coit Tower and the San Francisco Bay. 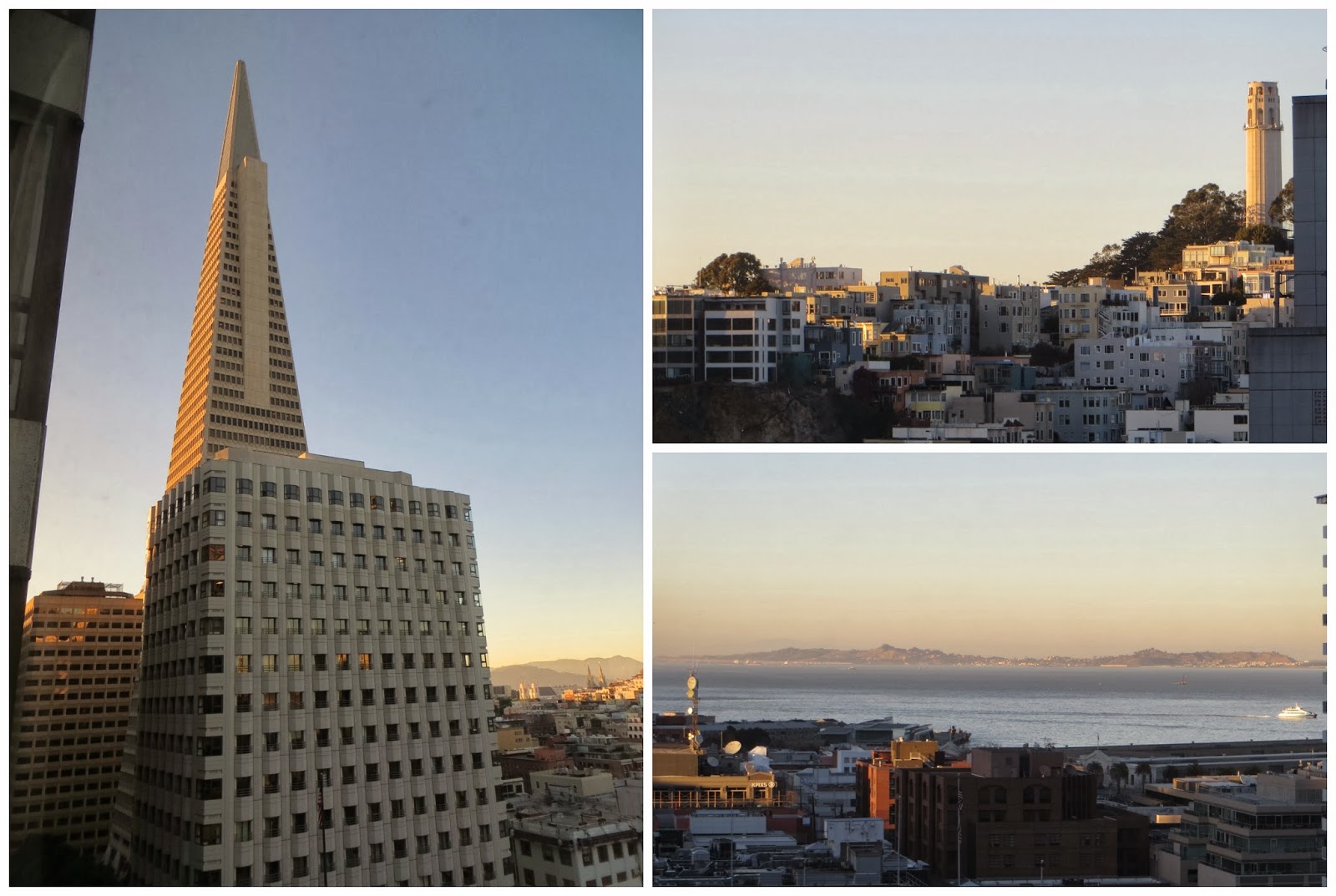 That night, I met up with two of my former co-workers who had both relocated to SF some years ago. We had dinner at Per Diem. The restaurant was a happening little spot for the after work crowd. Two of us shared the Burrata on a Grilled Crostone which had honey, sea salt and toasted almonds. It was ridiculous and I am going to totally make my own version of it! So good!

Unfortunately, my entree was not yummy. I had the porcini mushroom pappardelle. It was dry and didn’t have much flavor.

After dinner, it visited my friends’ workplace and then headed back to the hotel for a 3.1 mile run on the treadmill. Hooray for hotel gyms!

My plan to sleep in on Friday morning was dashed by some screaming homeless people, so I went out in search of dan taat (egg tart) in Chinatown. 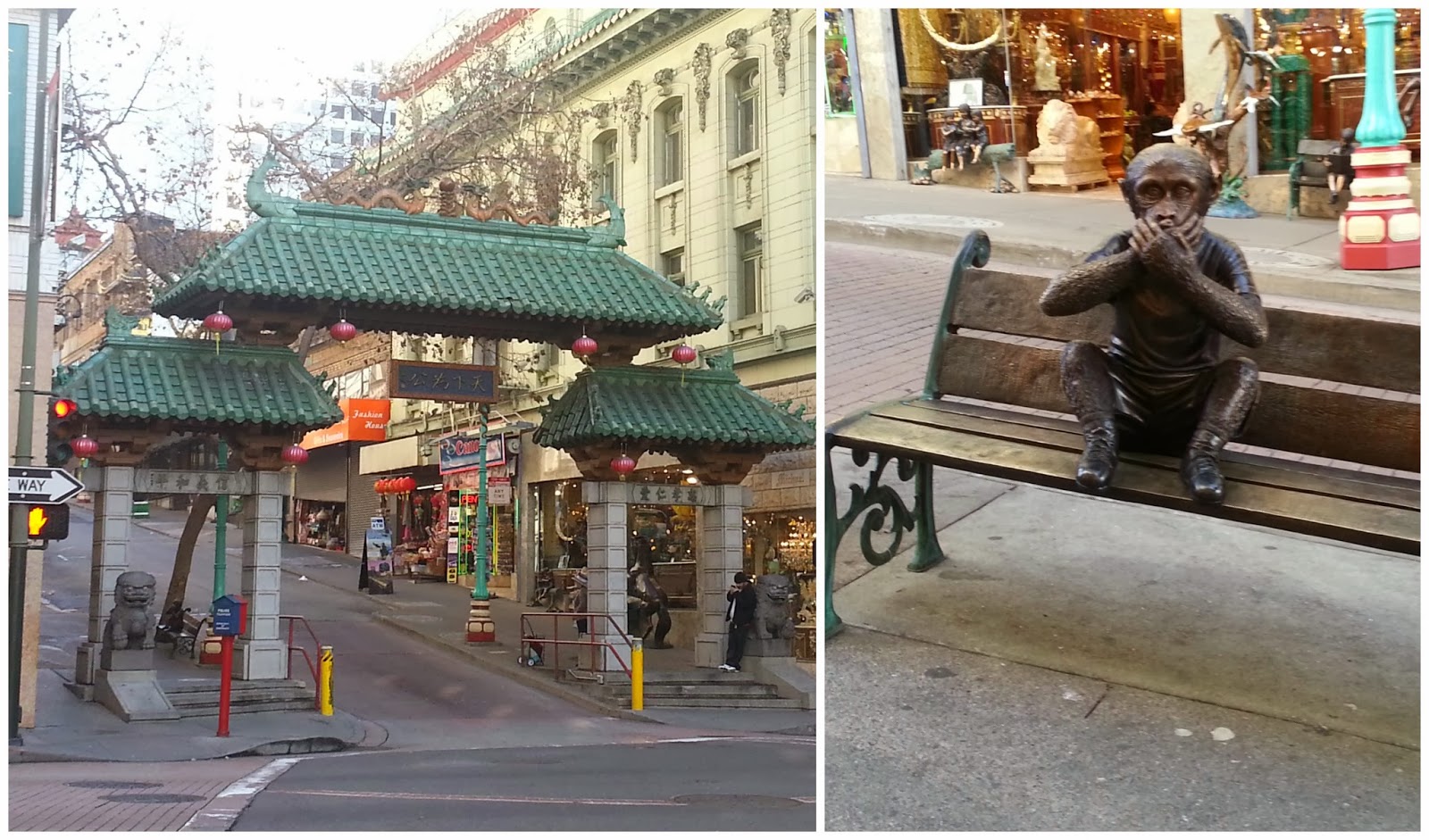 My usual place was closed until the weekend, so I headed to Eastern Bakery instead. Such yummy goodness for a little more than $1! 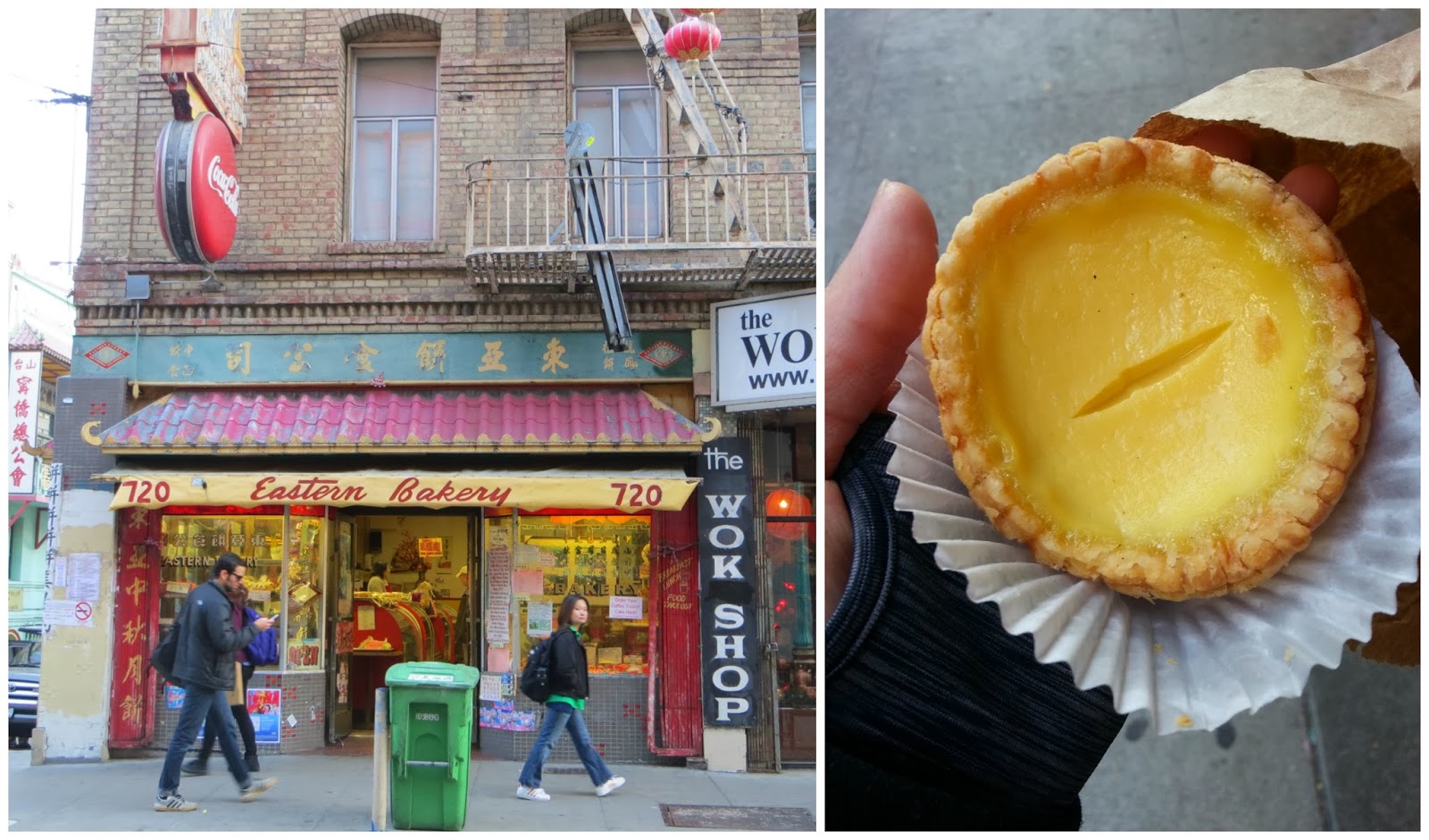 The rest of the morning was uneventful because I had some errands to take care of. Hello, Union Square. 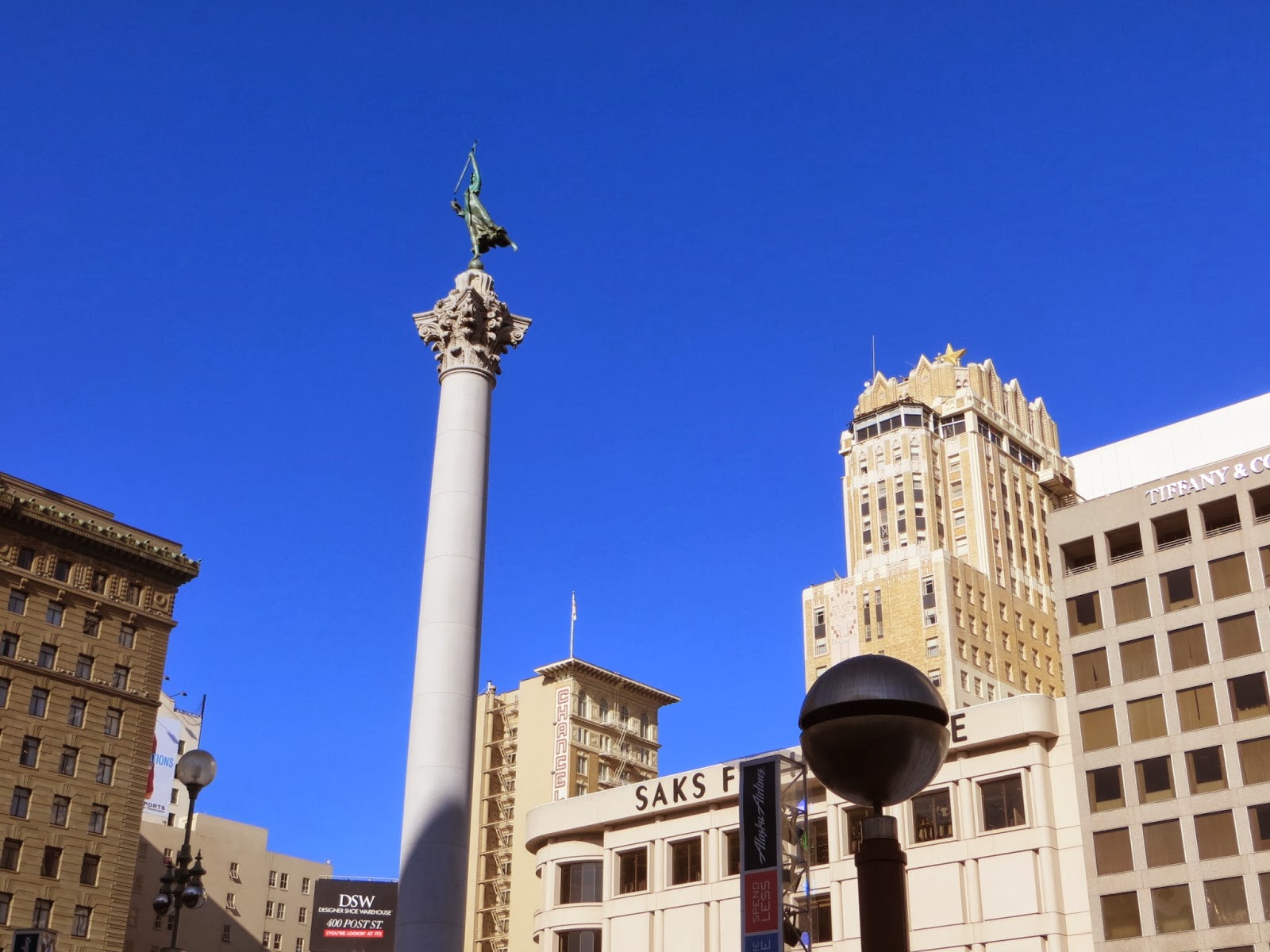 I did stop by Native Juice Co. for some healthy nourishment. I knew that the next few days would be filled with booze and heavy food so I thought some fresh juice would be a good thing to have this morning.

I made it back to my hotel to check out and then meet up with one of my UCLA roommates for lunch. I specifically requested Mexican food for lunch. The east coast is not known for having stellar Mexican food and I was dying for some of the good stuff!

We went to Pisto’s in North Beach, where I had an order of Mexican corn as well as lengua and al pastor tacos. Everything was great, but I especially loved the fresh corn. I could eat that every day. 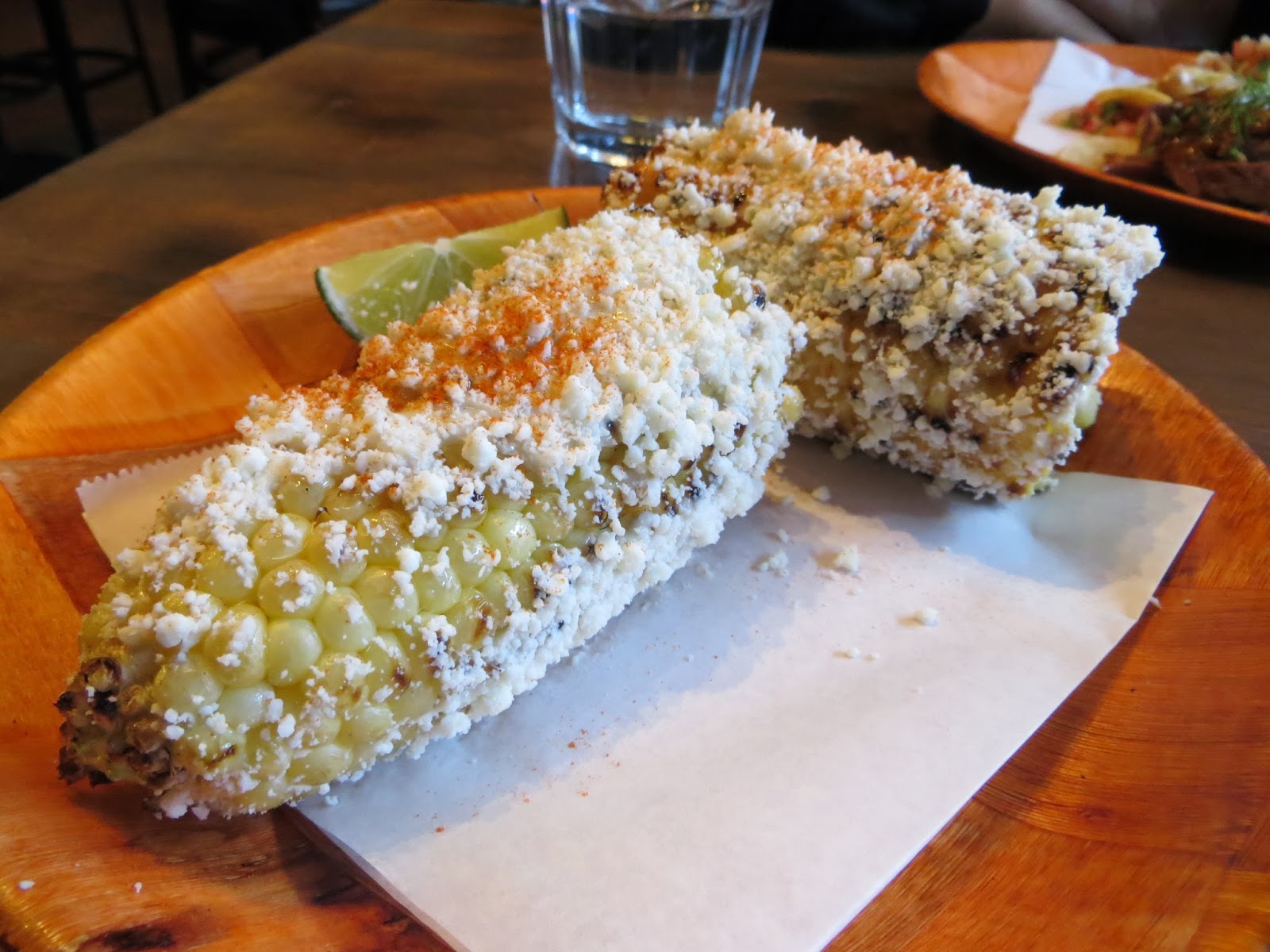 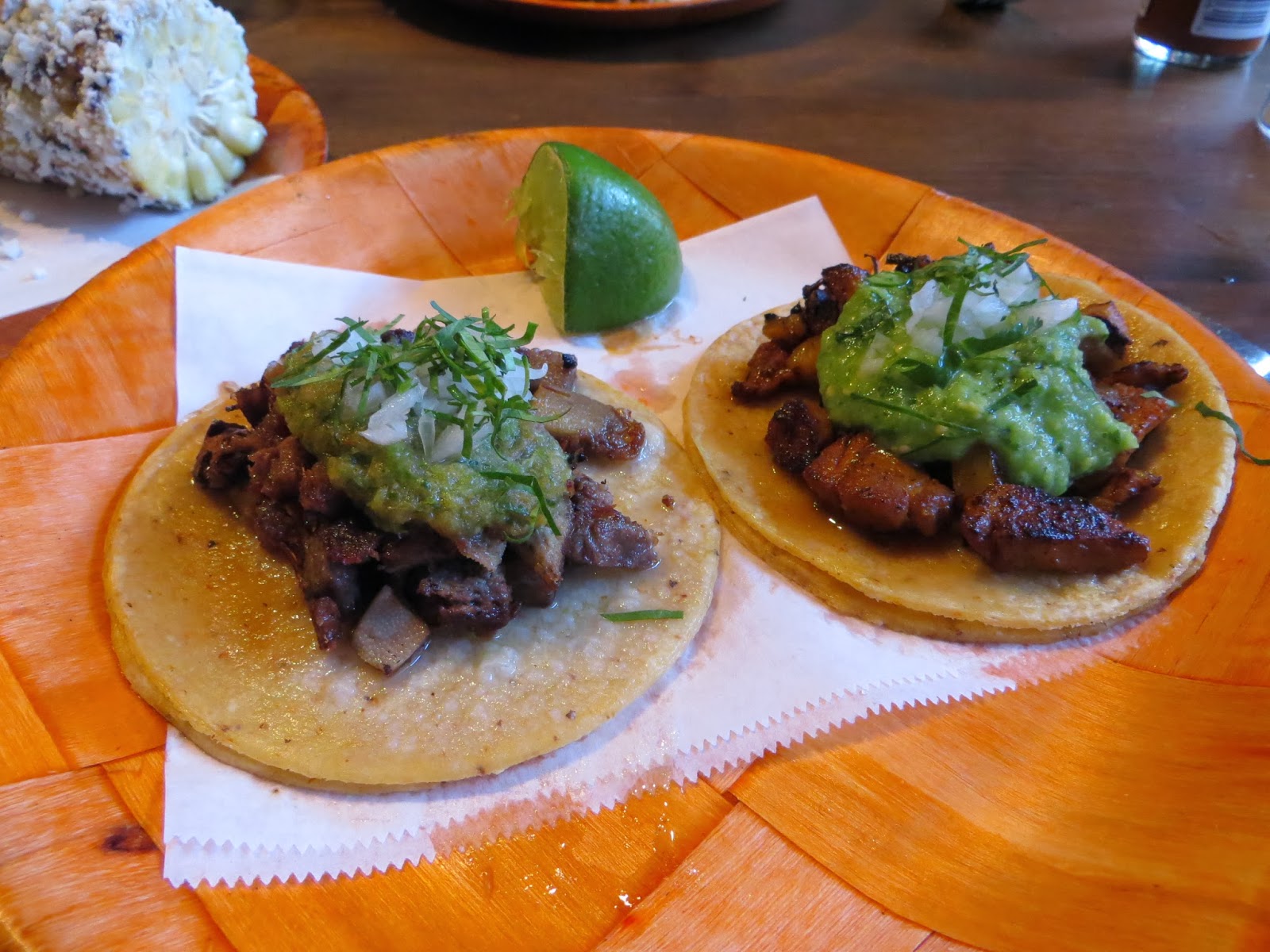 After lunch, it was time to put on my sneakers because I had some urban hiking on the agenda. I walked with my friend back to her work and then I continued on to the Filbert Street Steps.

This set of steps has three sections and eventually leads all the way up to Coit Tower, along the way is a garden, which is home to a flock of parrots, as well as residences. Coit Tower is one of my favorite places in San Francisco, so I had to include it in my visit.
Once I reached the top, I discovered Coit Tower is currently closed but will reopen in the spring. I wasn’t too disappointed though because there were still great views at the bottom of the tower, including of the iconic Golden Gate Bridge.

At the bottom of Coit Tower, there was an old Asian man sun drying some meat on one of the fences! So awesome. 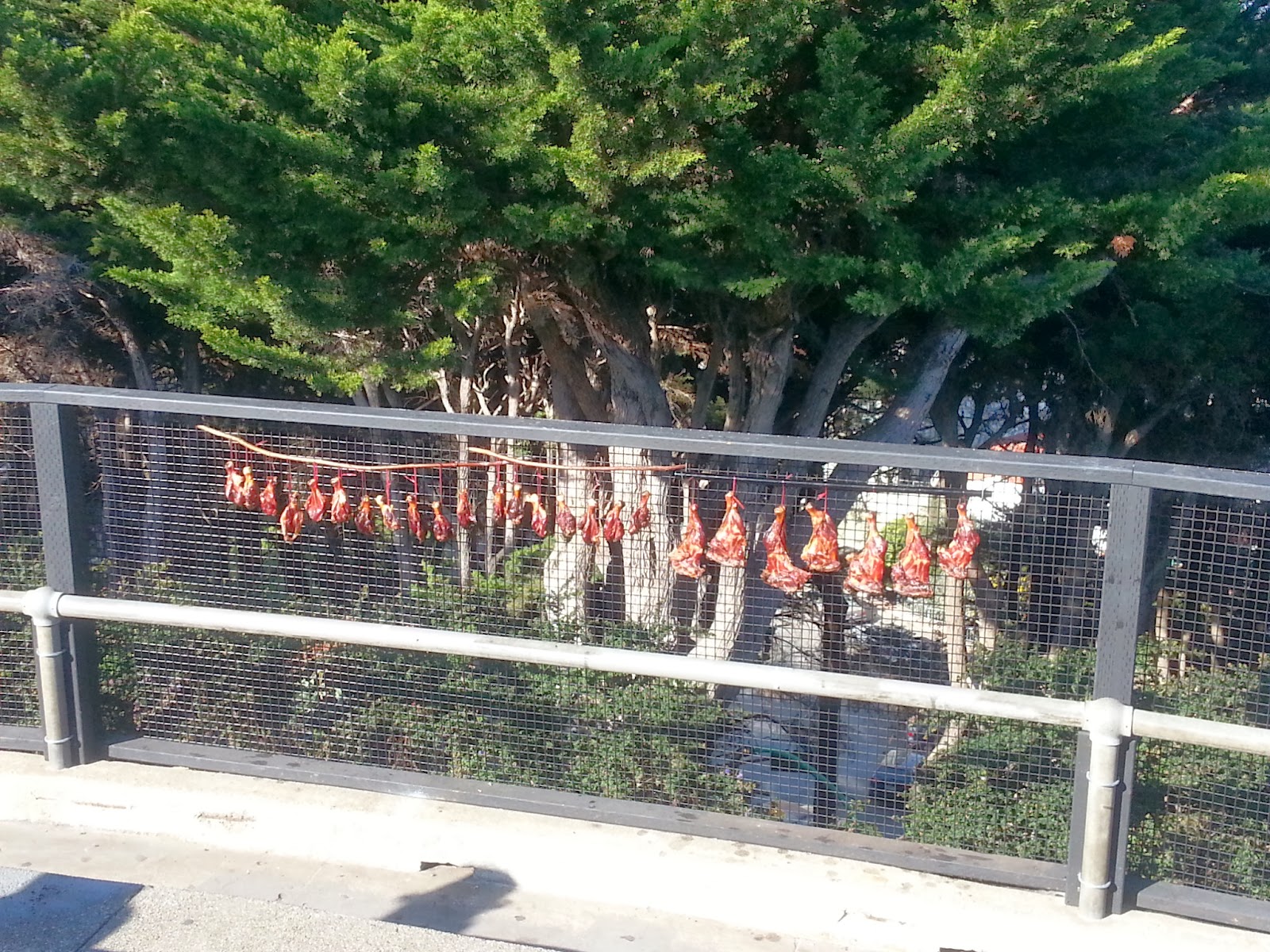 After that quick but strenuous walk, it was time for me to grab some coffee. I just had a few more hills to tackle! 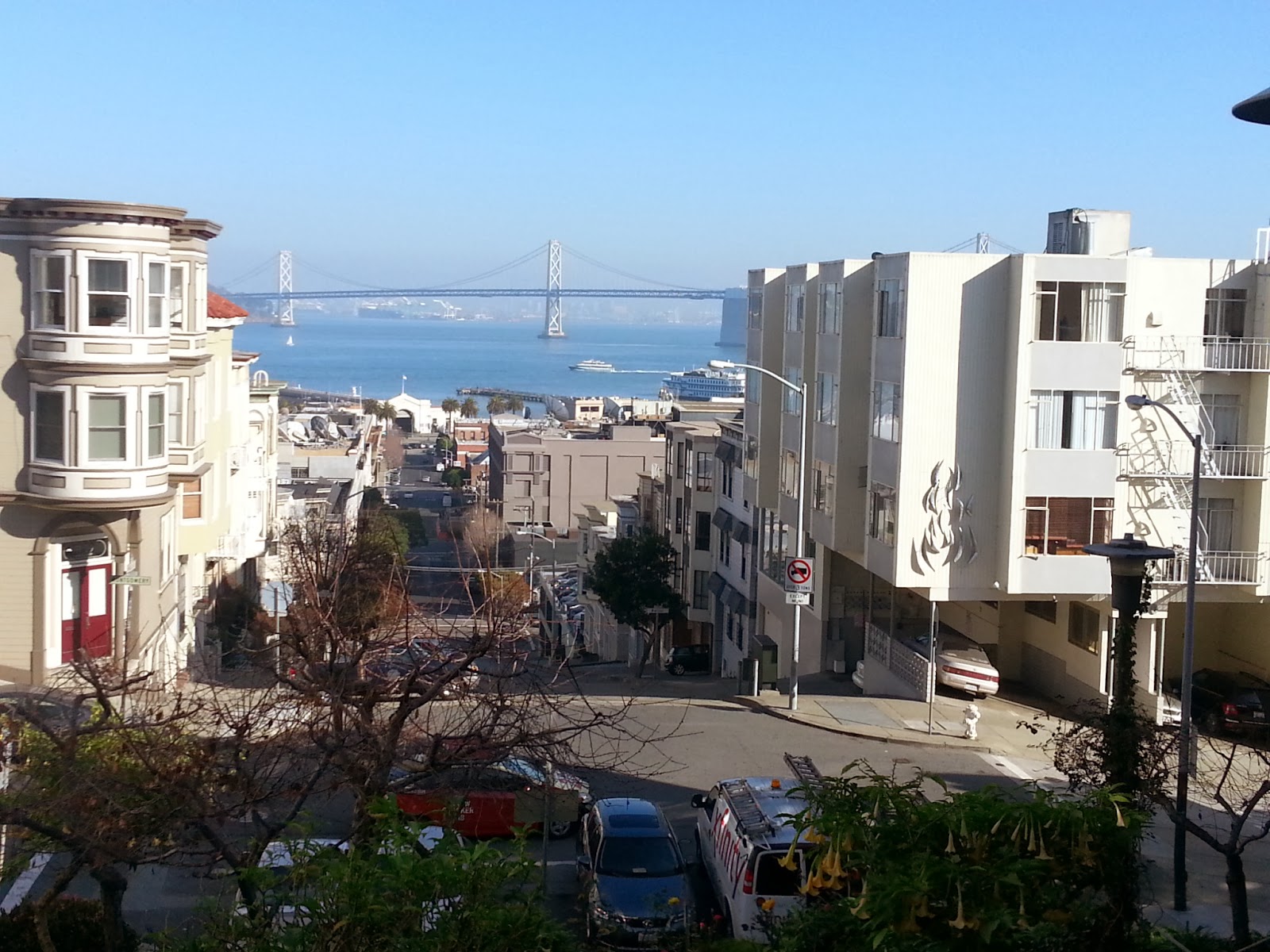 Before too long, it was time to hit the road and make our way to the Napa Valley! More on that later!

After two nights in Savannah, we headed to Charleston, South Carolina to wrap up our Thanksgiving holiday. We had less than 24 hours to explore the city, so we tried to see a lot of it on foot.

Here is our trip in photographs: 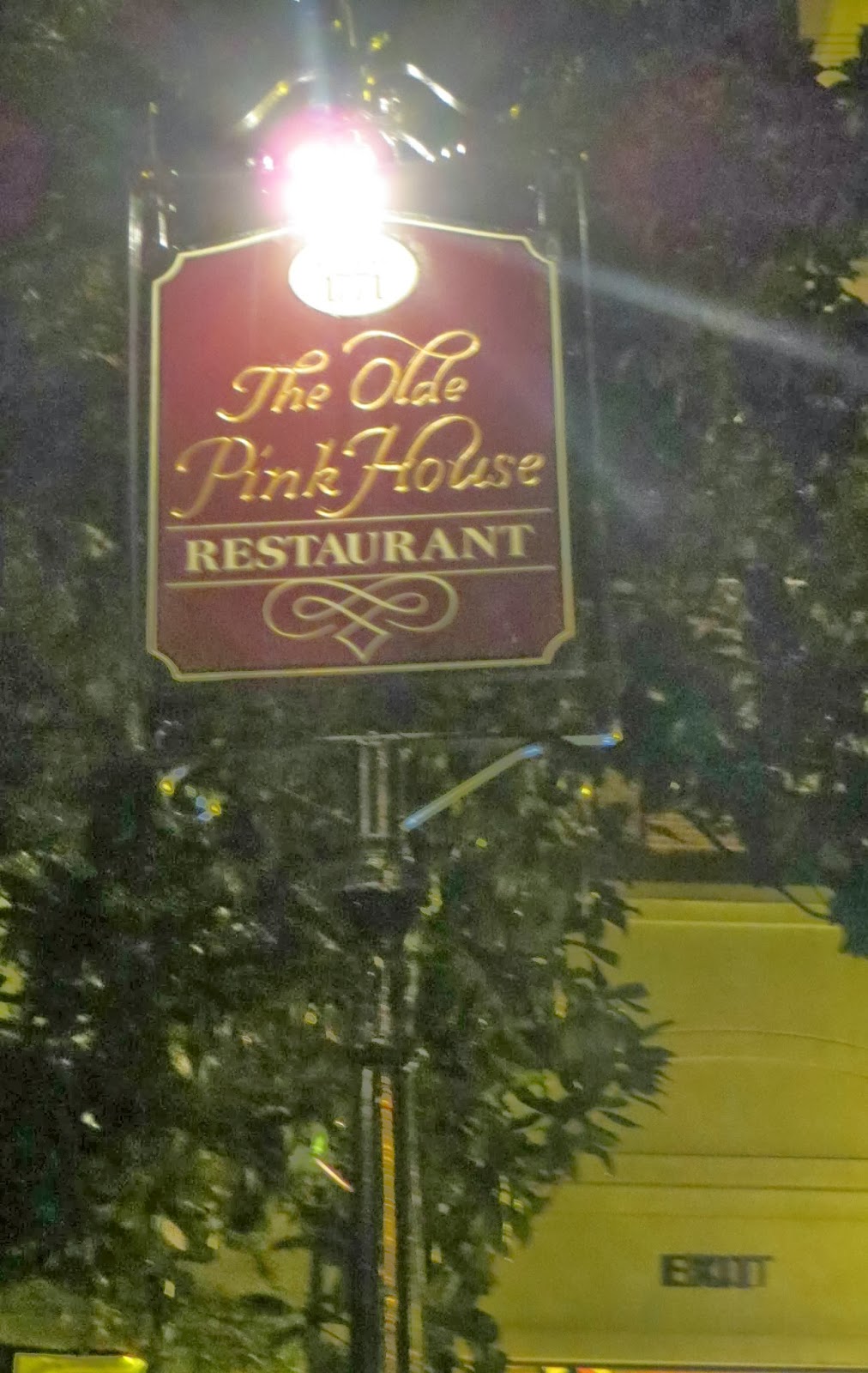 This photo of The Olde Pink House is courtesy of TripAdvisor