This week has been rough. I’m not sure if it is because the sun isn’t rising as early combined with the sun setting earlier or maybe it is because I got a flu shot on Monday and maybe that has made me fatigued. But I have been so tired this week. I even took a four hour nap on Sunday afternoon, which is totally unlike me. I hope I get over this soon!
I participated in the Light the Way 5K on Saturday, which I will recap later this week. It was a lot of fun and can’t wait to tell you about it.

The rest of the week was pretty bad workout-wise. I had to stop a few times mid-workout because I was so drained.

On Friday, I volunteered at the packet pick-up for a local race that happened on Saturday morning. It obviously wasn’t a race I did because I was at the Light the Way 5K. During my volunteer shift, something occurred to me which made me think. I wondered if I felt that there was something wrong with me volunteering my time for a for-profit race. I have volunteered two times now at for-profit races and it didn’t even occur to me the first time to ask myself why I was volunteering at an event for a business that was making tons of money. Anyway, to save myself from having to answer that question next time, I’m going to volunteer for not-for-profit events in the future.

On Saturday, Raisin Bread and I drove out to Annandale to try out a new-to-us Korean barbecue place: Kogiya. The wait was horrendous but the food was great. We had quite the spread. We ordered a seafood pancake, bulgogi and kalbi and of course, had loads of banchan. Yum yum! Kogiya seems to bring in a lot of bodies with their all-you-can-eat barbecue but we weren’t sold on the cuts of meat, so we ordered a la carte. 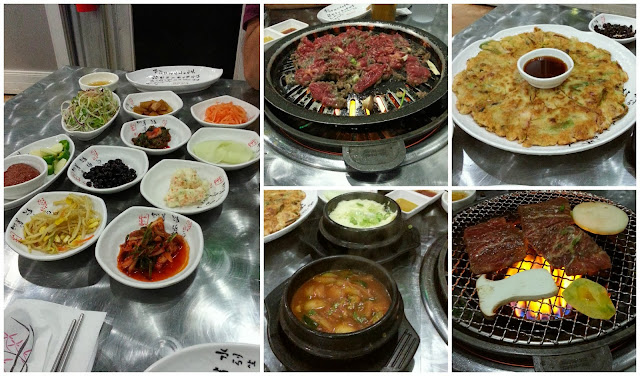