To finish out my recap of my adventures in Maine last month, here is a look at what we ate on our trip!

If you missed my other posts on Maine, check them out first:

Our first breakfast in Bar Harbor was at 2 Cats. In addition to being a cafe, 2 Cats is an inn and seemed to be very popular. I found their decor to be super cute, and I don’t tend to like cats. Oh yeah, and there was a kitty scampering about during our meal so I think there is something to their name!

I ordered the breakfast burrito, which came with home fries and black beans. I was in the mood for something salty, but I must admit this wasn’t the best breakfast burrito I’ve had in my life. Raisin Bread had pancakes and they looked delish! 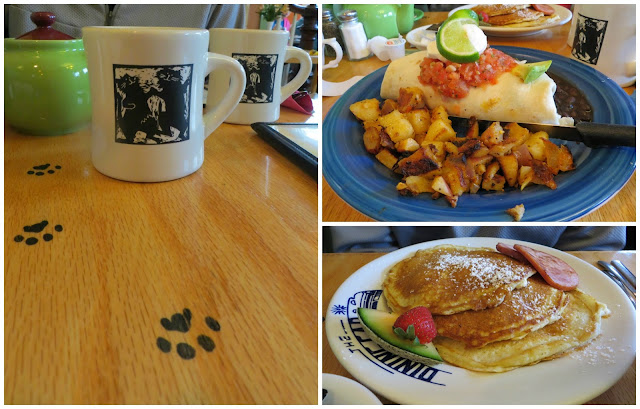 For breakfast on our final morning in Maine, we went to Cafe This Way, which we had just been to the previous night for dessert (see below). I wanted to keep up my lobster-eating streak and decided on the lobster benedict. I have been trying to convince myself to try a benny again because they have two things I enjoy: poached eggs and an English muffin. Plus, this one, in particular, has lobster. How can I not like something with lobster? But alas, I think this will be my last attempt to like benedicts because they just don’t do it for me. Maybe it’s the Hollandaise sauce. I also ordered a cup of strawberries and cream and would have liked it much more if that had been my entire meal, although I would have needed another cup or two to be full. So yummy! 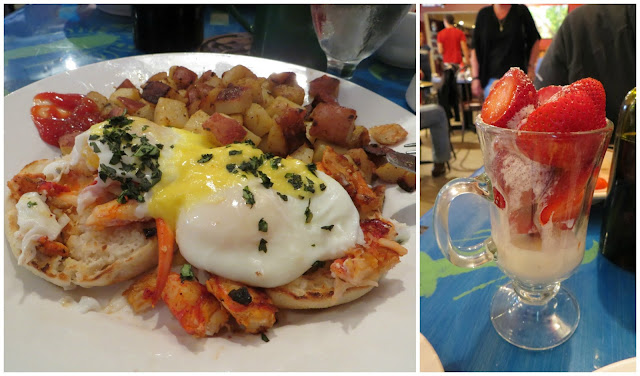 Raisin Bread had the granola and, fitting to his name, the cinnamon-raisin French toast. 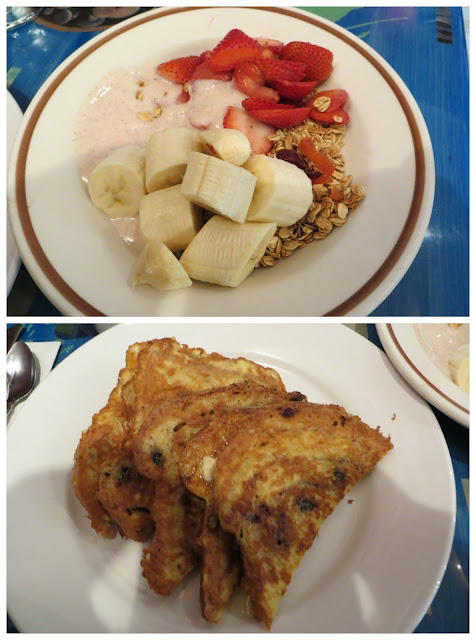 As I mentioned in this post, we had a picnic lunch from Adelmann’s Deli on our first day.

My favorite meal of the trip had to be from Trenton Bridge Lobster Pound. Super simple but so delicious! We originally tried to go to a roadside shack called The Travelin’ Lobster but it was closed every time we drove past. There are lobster pounds all up and down the main road. We picked this one from Yelp. 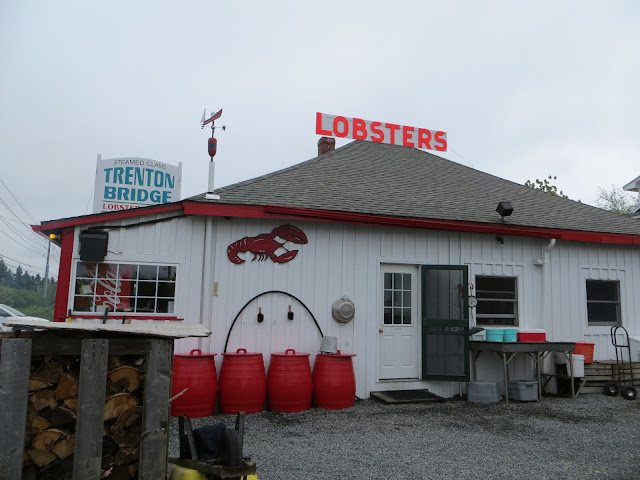 The lobsters are all live here, so when we ordered, the cashier opened a big cooler with all the lobsters napping inside for us to pick which ones we wanted. They were then placed into a rope net/basket and brought outside to this steamers. 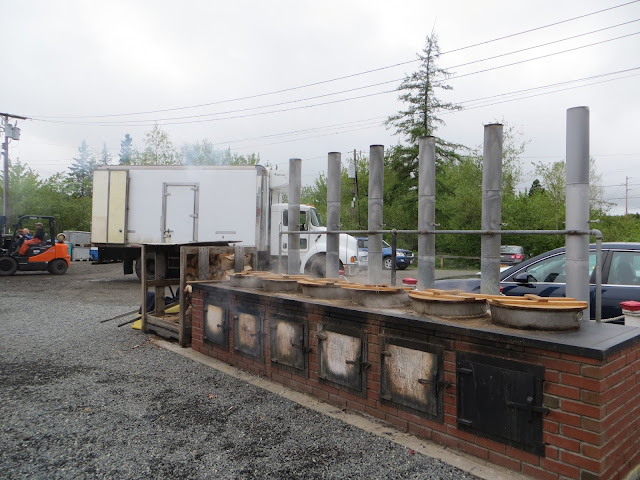 When our number was called, we got these beauties. They were so tasty. The only annoying thing about this place was that you have to pay extra for lemons and butter. What’s up with that?
We also each ordered a corn on the cob. Also delish! 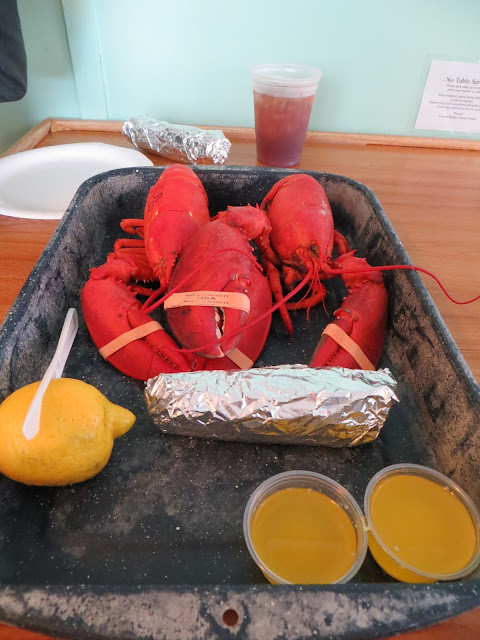 My second favorite meal of the trip was dinner at Side Street Cafe. The restaurant was packed when we got there so we had to wait a few minutes for a table. I ordered the Curious Traveler Shandy while we waited.

For dinner, I ordered a side salad and a half order of the lobster mac and cheese and added in bacon and mushroom. Oh my! It was ridiculously decadent but I don’t regret it one bit.

Raisin Bread had a burger and blueberry pie for dessert. There were blueberries everywhere, but I had no idea Maine was famous for them until we got there. 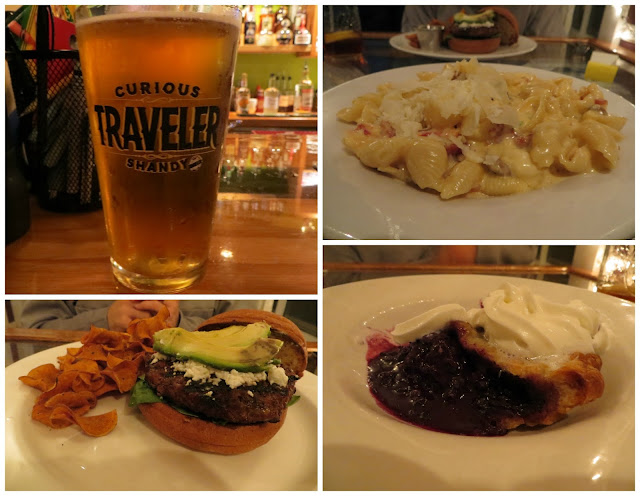 Our anniversary dinner was at Mache Bistro. It is a tiny place with a rotating menu that changes daily. Because of this, I can’t remember what exactly we ate since I couldn’t refer to their website for help. 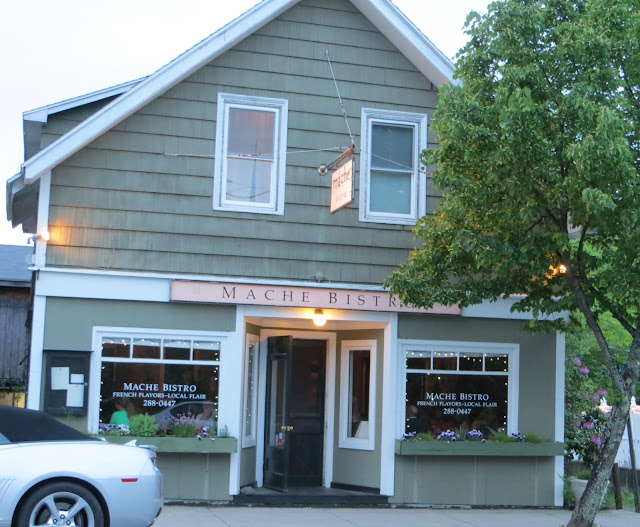 We ordered the three goat cheese plate to start. Raisin Bread had fish and I had steak. Sorry, no other details available! 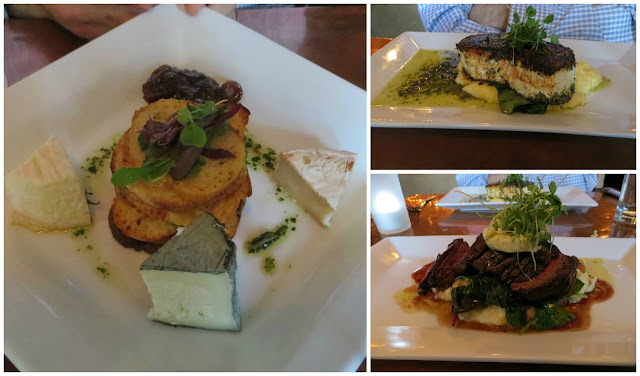 Snacks were available high and low through all of Mount Desert Island. As I mentioned before, we visited Jordan Pond House for popovers and tea one afternoon.

After dinner at Mache Bistro, we went for a short walk around town for some shopping and in search of dessert. We settled on Cafe This Way for homemade strawberry rhubarb pie and cheesecake.

Ice cream is another popular treat around town. I had a scoop of chocolate chili ice cream from Mount Desert Island Ice Cream. That hit the spot. 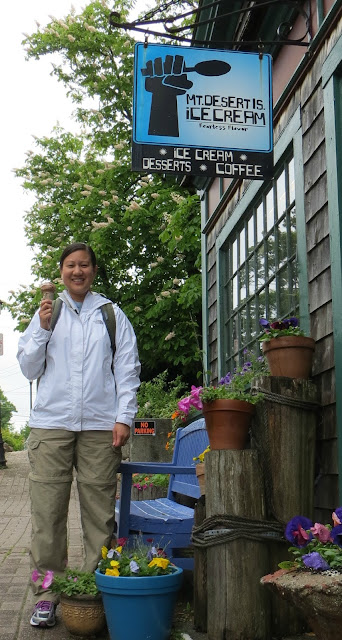 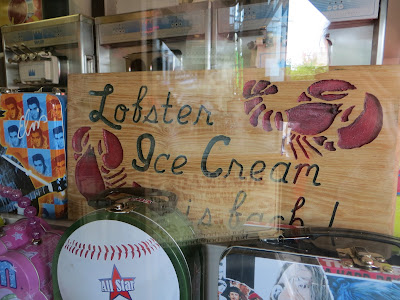 We visited the Morning Glory Bakery on two occasions because Raisin Bread loved it so much. They have lots of reasonably priced pastries and desserts. We enjoyed blueberry bread and cookies. 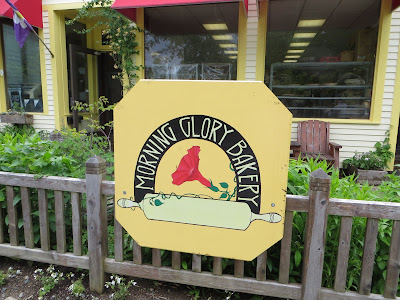 That’s all. I had a wonderful time in Maine. It is a beautiful place and reminds me how much there is to see and experience in our great country.
2 Cats
130 Cottage Street
Bar Harbor, ME 04609