So what happens when I get stuck at home for four days straight? I sign up for a half marathon! Yes, folks, it looks like I have 18 weeks to train for this. My sister should get at least 75 percent of the blame, but I am both excited and anxious about how my training will go. You see, I have never run anything longer than a 5K so this is going to be quite a challenge. My goal is to follow my training regime to a tee over the next 18 weeks and just do what feels right on race day. 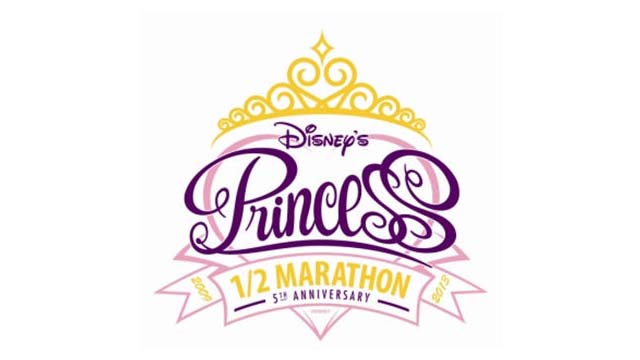 Today was my first official training day and I managed to follow through with it despite the rain and 45 degree weather. I think the most difficult part will be getting in runs before work since on some of my training days, I go straight to school after work. It is going to be tough getting those runs in!

Any advice for a first time half-marathoner would be appreciated!
———————————————
On Sunday, husband and I were walking around and saw this Lululemon store boarded up for the impending storm. I didn’t see any other stores boarded up but we also weren’t out and about much after I took this photo. 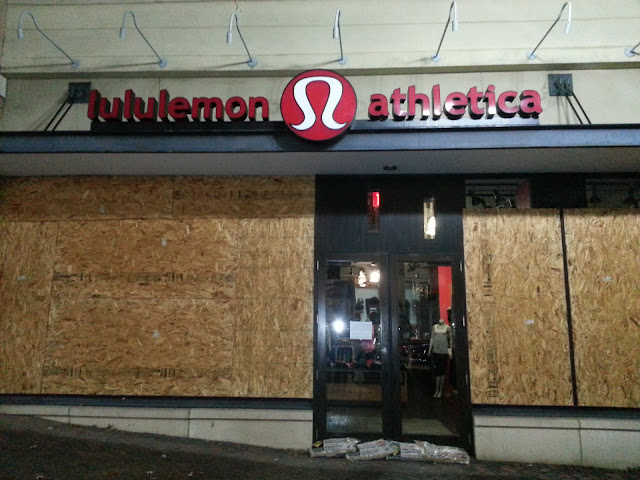 Last weekend, my schoolwork wasn’t as heavy so Raisin Bread and I had some time to check out Ai Wei Wei’s According to What? exhibit at the Hirshhorn. I found this exhibit to be quite fascinating in terms of the subject matter and the variety of mediums he uses. 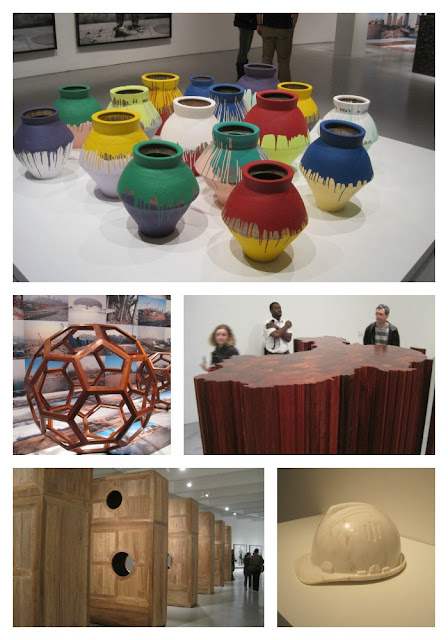 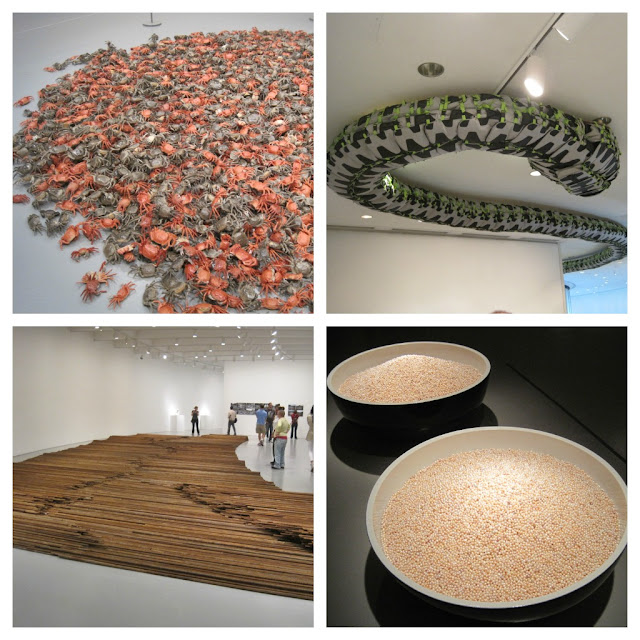 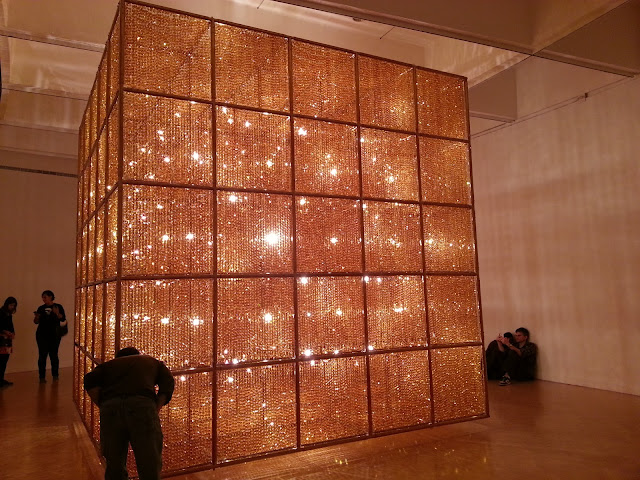 The baby brother and the baby brother’s future wifey came to visit us in August. It gave me, at least, a time to step away from the computer and enjoy some of the things that DC has to offer and I rarely have the free time to take advantage of.

Our first stop was the National Building Museum to see the LEGO Architecture exhibit. This exhibit displayed models of famous structures from around the world, like Fallingwater, the Empire State Building and Burj Khalifa, made entirely of LEGOs! Color me impressed. 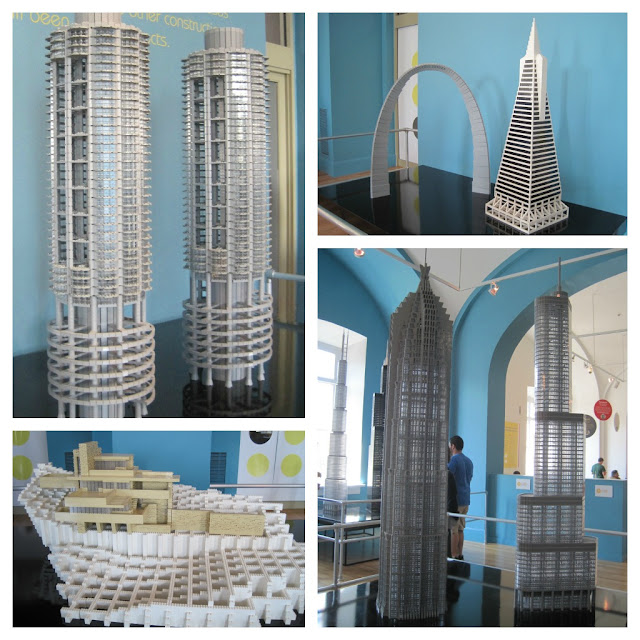 Their visit also coincided with DC Restaurant Week, which gave us the perfect opportunity to try a new restaurant. We chose Jose Andres’s Zaytinya because their mezze menu is perfect for sharing with a small group. 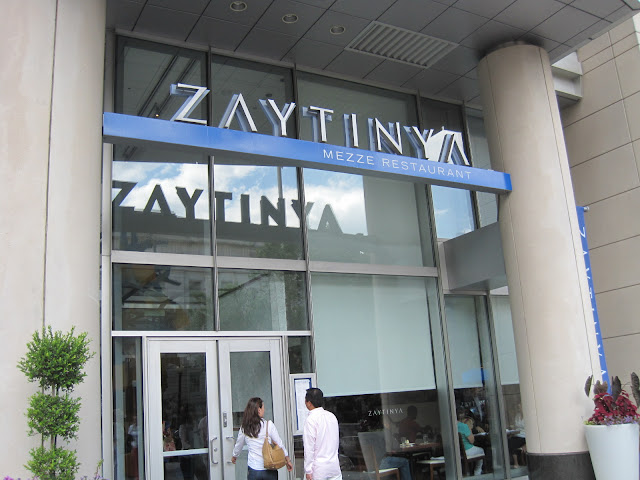 Since there was four of us, ordering was very easy. We just ordered one of everything from the restaurant week menu, with the exception of dessert which we ordered two of each.

The restaurant’s food is inspired by Greek, Turkish and Lebanese cuisine. One thing that stood out to us almost immediately was their never-ending bread basket. We did not stop getting these baskets of puffy, warm pita breads the whole time. They must have switched out our baskets at least four times. 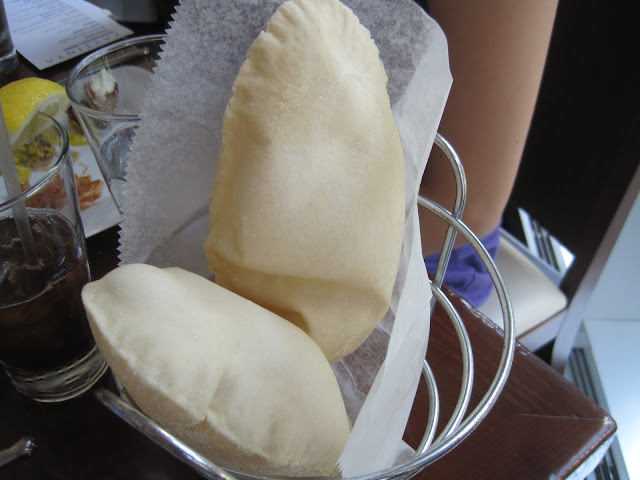 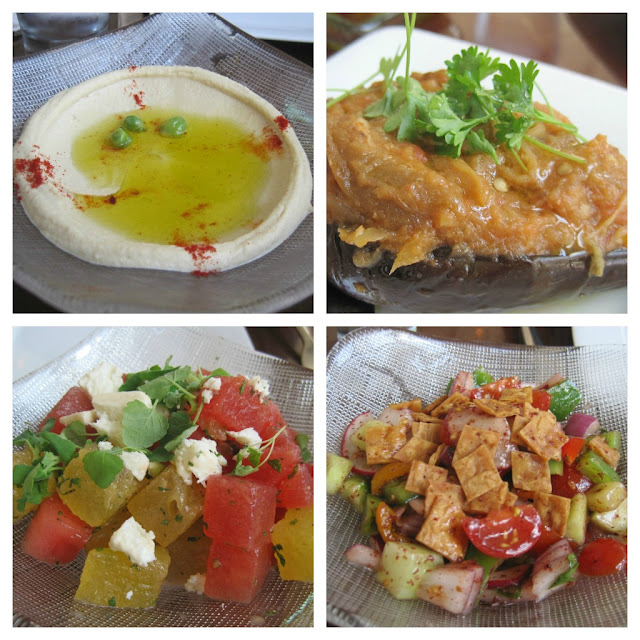 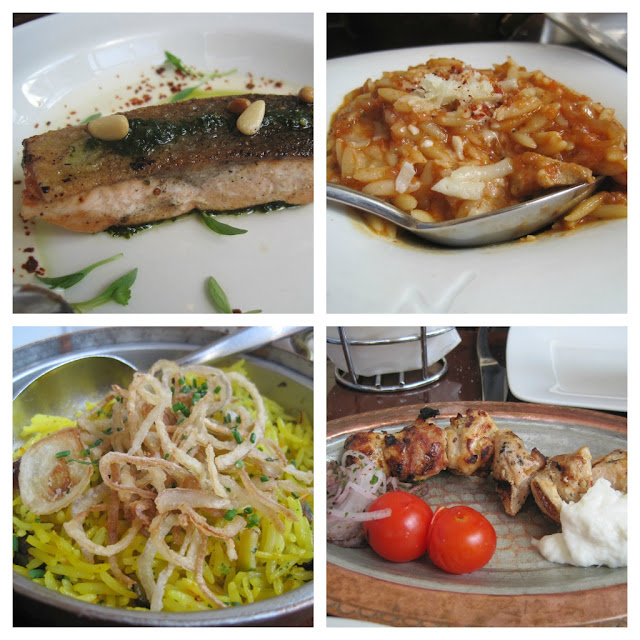 The orzo dish was by far the most unappealing dish of our entire meal. It was simply unexciting. I was surprised by the flavorfulness of the chicken, however, so that was a welcome surprise.
Then came some heavier dishes of crispy brussels afelia (brussels sprouts, coriander seed, barberries, garlic yogurt),  keftedes kapama (beef meatballs, feta cheese, rustic tomato sauce, cinnamon, allspice), garides me anitho (sauteed shrip, dill, shallots, mustard, lemon juice), and adana kebab (skewered ground lamb, house-made harissa, grilled tomatoes, sumac, onions). 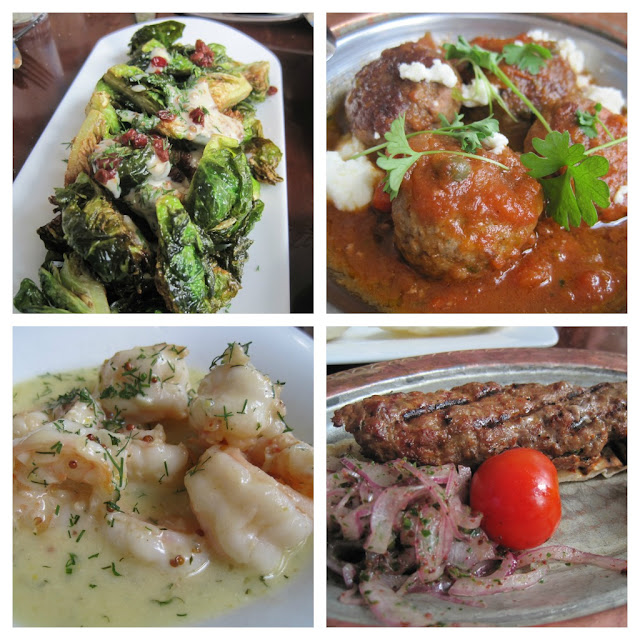 The two dishes that I thought I would love were just okay for me due to flavor issues. I typically love brussels sprouts in any preparation. I had a hard time with this version though because I found the sauce to have the consistency of a mayonnaise, which turned me off a bit. I did think that the addition of berries was very interesting and tasty. I also found that they were a little heavy handed with the dill on the shrimp dish as well.
Last but not least were desserts of Greek Yogurt and Apricots (muscat soaked apricots, vanilla yogurt cream, apricot sorbet and pistachio powder) and Turkish Delight (walnut ice cream, yogurt moose, honey gelee, orange-caramel sauce, caramelized pine nuts). 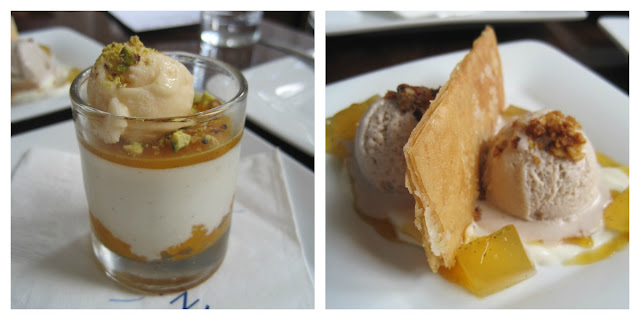 Both were a nice ending to a pleasant meal. I didn’t find either dessert to be overly sweet and I was happy that they were both relatively light compared to the meal we had just completed.
Following lunch, we walked across the street to the Smithsonian Museum of American Art to see The Art of Video Games exhibit and walk around the permanent collection. Seeing this exhibit made me realize that I have pretty much been alive through the whole history that is explored in the exhibition. I am so old! 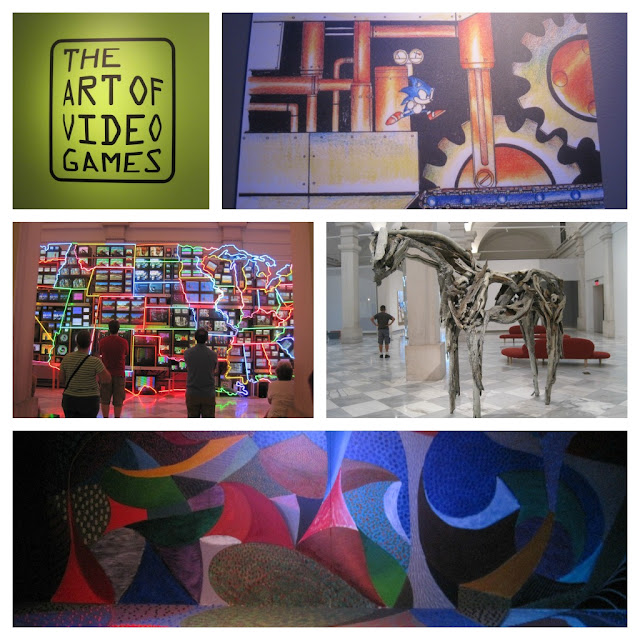 The rest of the day was spend at the National Gallery‘s Sculpture Garden, eating Korean bbq and watching ParaNorman.

The next day we ventured to Kushi, which had previously been one of my favorite restaurants in DC, for their jazz brunch. The music was slightly too loud and the service was unacceptably slow. If it weren’t for those two factors, the meal would have been enjoyable as I thought the food was just as good as it had been every other time I have been there.

The brunch for two people included two cocktails, one starter, two entrees and a dessert. I ordered their Yuzu orange mimosa and ocean’s oyako don (salmon sashimi and salmon roe with scallion, nori and wasabi over sushi rice) and shared the 2-piece raw oysters and the sea salt gelato. 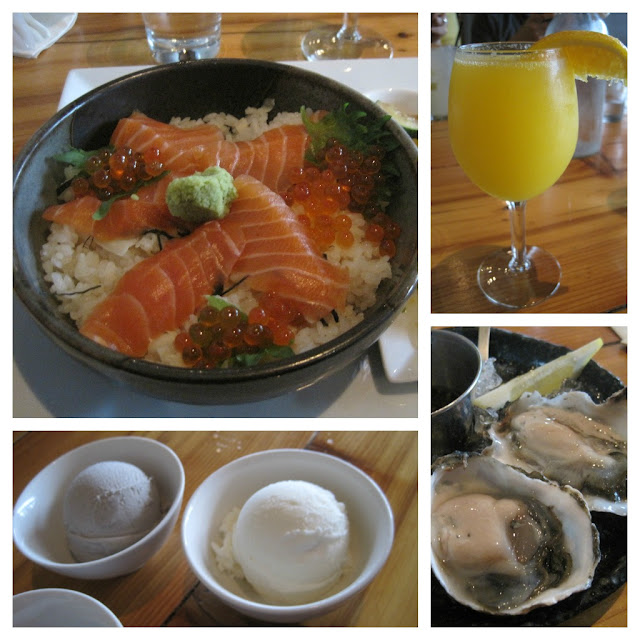 After brunch, we visited the Air and Space Museum before we had to drop off the sib and his betrothed to Union Station. 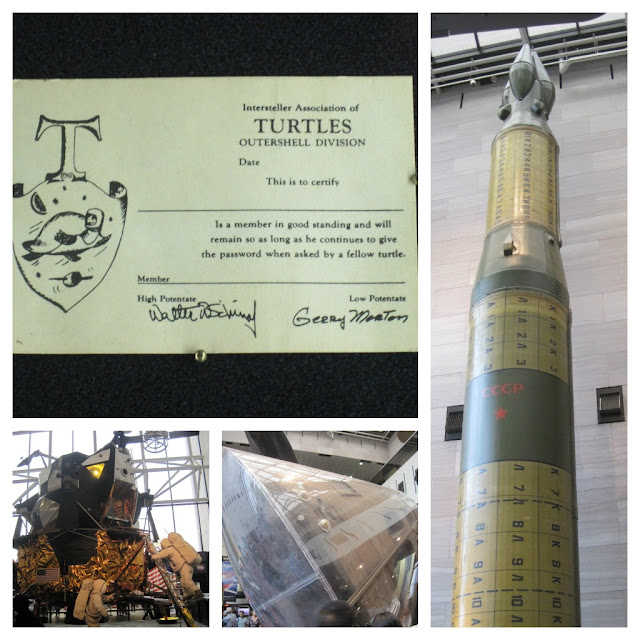 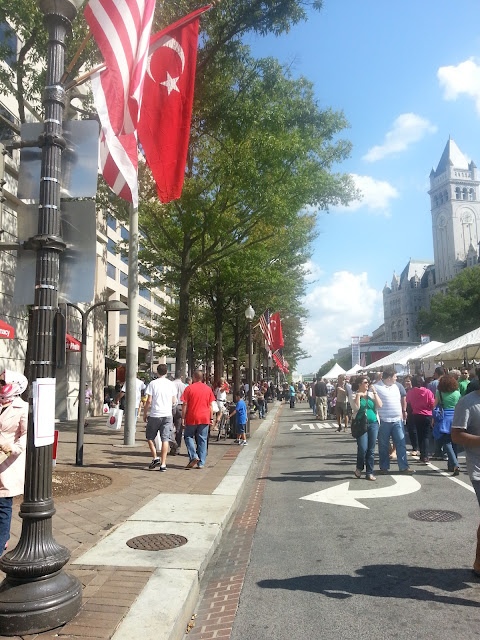 In case you haven’t noticed DC is a wonderfully international city so on any given weekend, there may be a couple of streets closed off in downtown DC due to a festival where all can enjoy some of the following: 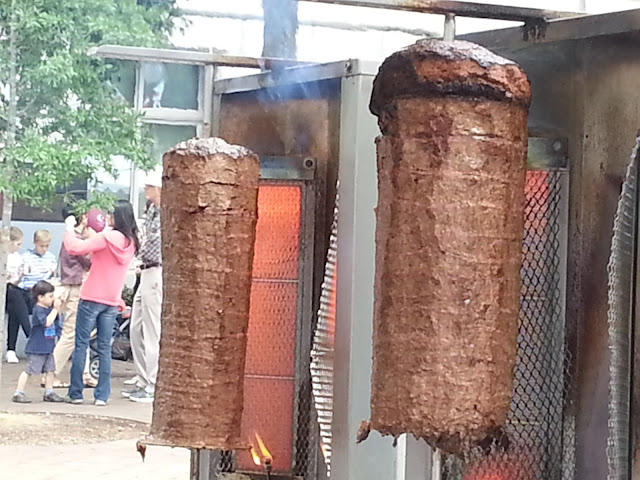 Rotating meat on a spit…soon to be a donor kebab for me to eat. 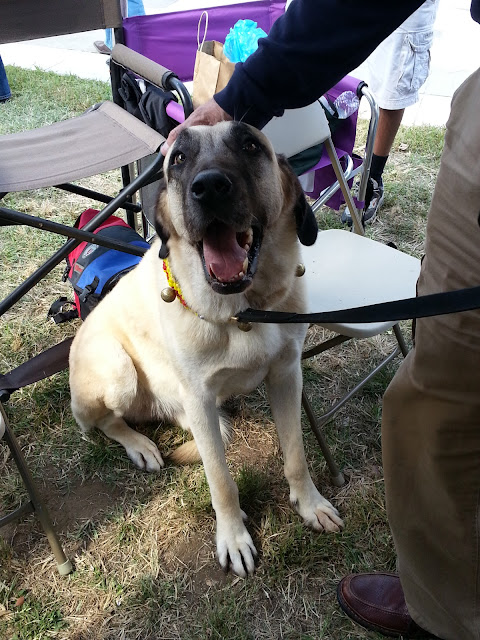 Turkish Kangal dogs. These guys are gigantic but very mild-mannered 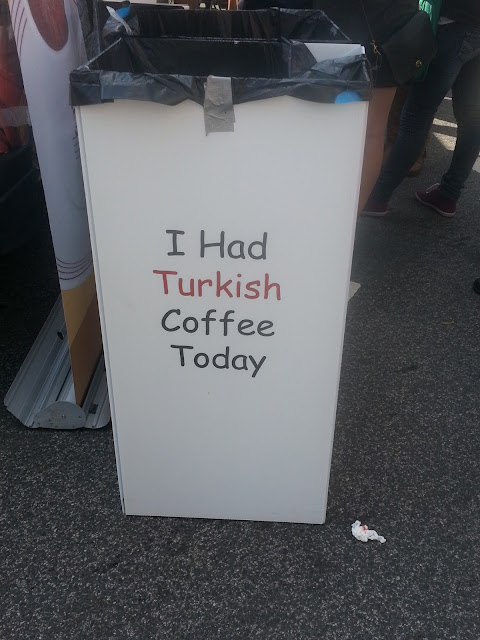 Trashcans celebrating Turkish coffee and which I used to dispose of my sludgy coffee grinds at the bottom of my cup. 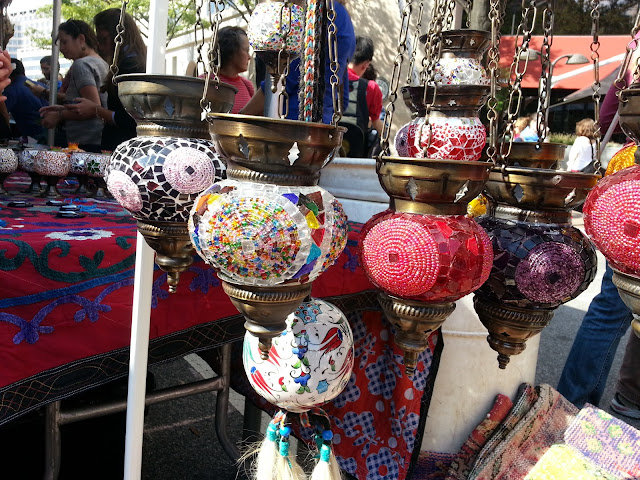 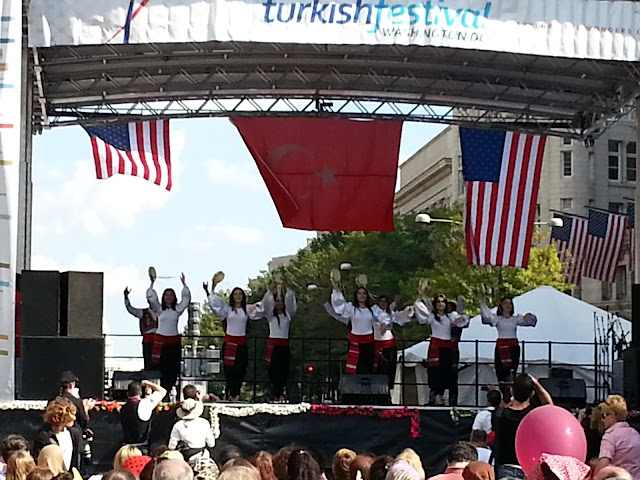 And folk dances and singing with tambourines. Just before this performance, a group of Turkish dancers did a very brief dance to Gangnam Style. Now, that’s what I call international!