Skip to content
Search
Close
Upon exiting the airport, we learned our first lesson in Bermuda. Don’t book a scooter online without confirming. Instead of immediately jumping on our bike and heading to St George, we instead needed to find a way to get to our hotel and drop off our luggage.
We found a transfer company that offered to take us to our hotel in Pembroke Parish for $20 and then took the 20 minute drive from the airport to the Royal Palms Hotel. By the time we arrived at our hotel, we came up with a new game plan for our day. We wanted to drop off our luggage and then go to the city for lunch and rent a scooter there. Our mini-suite was not available when we arrived at the hotel, so we checked in quickly and went on a 10 minute walk to Hamilton.

I made a list of restaurants to visit in St George, but since our plans got turned around, we needed to find somewhere to go in Hamilton. We found that many of the restaurants weren’t actually open for lunch on the weekend.

We passed by some notable sights, such as the bird cage traffic intersection and city hall, as we were looking for lunch.

By this time, we were ready to eat just about anywhere and decided on the Hog Penny. One thing that I learned over the few hours of research I was able to do on Bermuda was that it remains very British to this day. There are loads of pubs and restaurants serving fish and chips and other “traditional” British dishes. Hog Penny was just such a place. I ordered “Bermuda’s national cocktail” – the Rum Swizzle, which is rum, fruit juice and grenadine or some variation of that. Quite tasty!
We shared a bowl of fish chowder. When it arrived at our table, the waiter brought along two different types of rum and finished the chowder off with a bit of each. 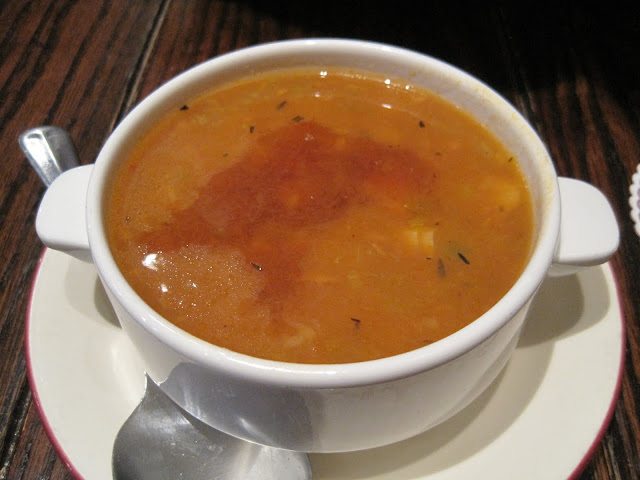 For my main, I had the fish burger. The local fish is rockfish, which I believe this was.

Unfortunately, it was overseasoned and very salty. The fries were very good though. 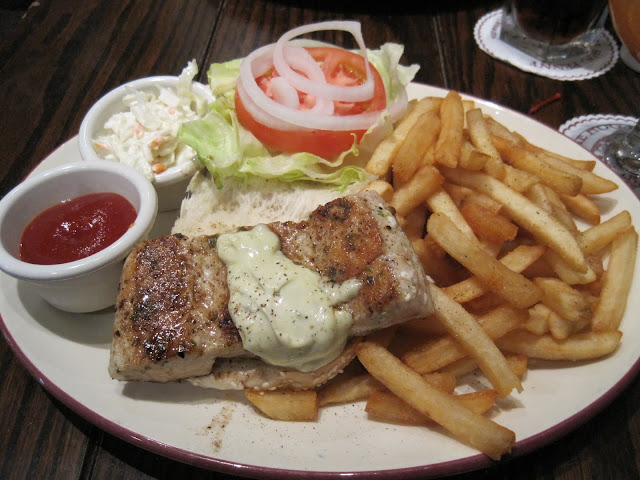 After lunch, we made our second attempt to procure a bike. They wanted to charge us $105 for the day, which is their normal price, so we knew that we weren’t getting ripped off but the cost just didn’t seem reasonable considering all we wanted to do was go to the beach. Paying $105 to go to the beach seemed a bit ridiculous to me. Instead, we headed back to the hotel to change and figure out another means to get to the beach.

I absolutely loved the Royal Palms. For one, it is independently owned and the staff there are exceedingly welcoming. The grounds are beautiful and, finally, they provide amenities for free that most hotels feel the need to charge you for, such as WiFi and bottled water.

Our mini-suite was located in the main building and had a small kitchen area with a microwave, toaster, sink, coffee maker, water boiler and dishes.

We decided to take the public bus from Hamilton to the beach. It wound up costing us $3 per person each way and took only 20 minutes. Horseshoe Bay is supposed to be one of the top 10 beaches in the world, and I can confirm that it is absolutely beautiful.

The sand is often described as being pink, and when you look at it in person, there are tiny flecks of pink coral in the sand. Raisin Bread said if you dropped a Good Humor strawberry shortcake bar in the sand, you wouldn’t be able to tell where the sand was. The sand was so soft that I described it as feeling like pasta dough.

We headed back to the hotel to clean up after our afternoon at the beach and figure out our dinner plans. We had some time before dinner to walk around Hamilton some more and sit by the harbor.
Different types of architecture can be found around Bermuda from pastel colored buildings to Gothic buildings.
For dinner, we went to Pearl, which specializes in Asian fusion. Although the service was atrocious, the food was very pleasing to the palate, plus they were pretty to look at.
We moved locations for dessert and wound up at Bolero Brasserie.  Bolero’s staff was very accommodating. We wanted to sit in the lounge and have dessert on their big couches. The manager had no problem with that and even dimmed the lights to “make it more romantic.”
I ordered the coffee with Godiva liqueur and the crepes with cherries and chocolate sauce. I loved both although I saw a sticky toffee pudding on the menu after I had ordered. Next time I’ll try that.
The rest of the evening was spent back at our hotel watching the second half of Inglorious Basterds.
Our flight back home left at noon the next day so we had only time to enjoy the hotel’s free breakfast and check out before leaving for the airport.
Our time was short in Bermuda and I hope to be back while I’m still living in DC. It is only 2 hour flight.
My next visit is sure to include another visit to Horseshoe Bay, seeing St George, afternoon tea at the Fairmont Princess and dinner at Bolero Brasserie.

As I was walking to the Metro on my way to work on Friday, I thought to myself, “working on my birthday sucks.” Then I remembered that growing up I had 18 years of not doing any work on my birthday and then I didn’t feel so bad.

I also didn’t feel so bad because Raisin Bread planned a lovely after work surprise!

We had dinner at Ristorante Piccolo in Georgetown. In my book, this is a pretty solid Italian joint. I ordered the veal piccata. Three thin portions of veal and a helping of vegetables. My only complaint was that the sauce was a tad on the garlicy side. 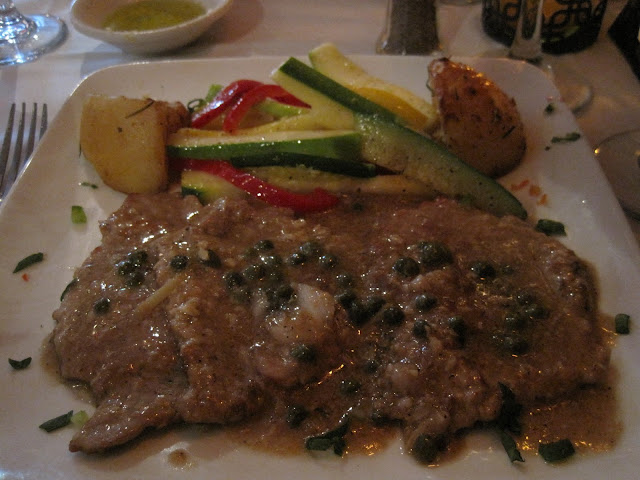 After dinner, we walked over to Brush n Blush for a painting class. We had previously looked into booking a class here but their calendar was fully booked for the remainder of the month. Raisin Bread stayed on top of it though and saw that there were two spots that opened up for this session. Brush n Blush offers a class every night where participants paint a specific painting. Tonight it was a picture of the Eiffel Tower. Très fitting! The “blush” part is that you it’s bring your on booze.

This is the studio ready for us to start. 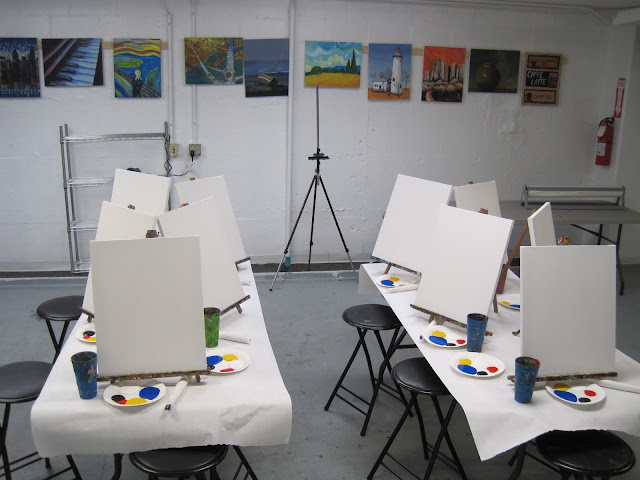 My first layer of paint on the canvas. 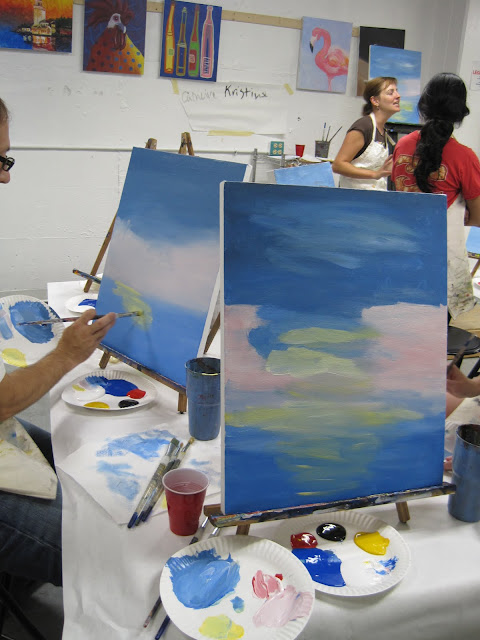 Me all done with my painting! 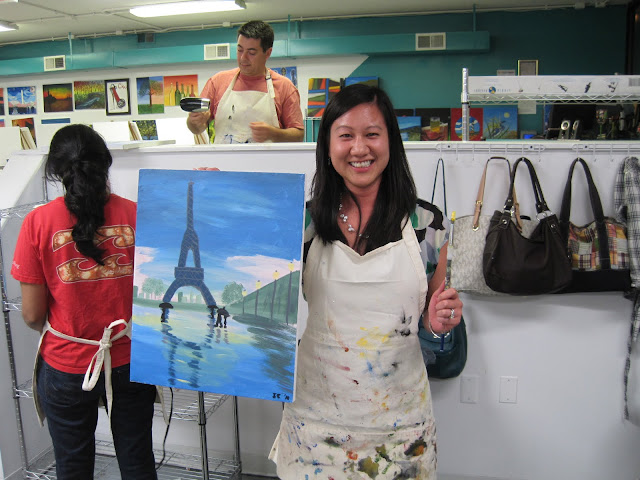 I would highly recommend Brush n Blush to anyone. I have never taken a painting class in my life so it was pretty intimidating to know that I would have to complete a painting in two hours, but as you can see, it was possible. Our instructor would have us stop after we completed certain portions of the painting so we could walk around and see what everyone else’s looked like. It was so interesting just how different each one was, but they still all looked great. I would like to go again sometime now that I have a feel for how to use the different types of paintbrushes and know what acrylic paints can do.
After our artistic moment, we went to Kafe Leopold for dessert. This place remains one of my favorite joints in DC. I have never had a bad order there. Since it was my birthday, I ordered my old stand-by: a fruit tart! Nom. 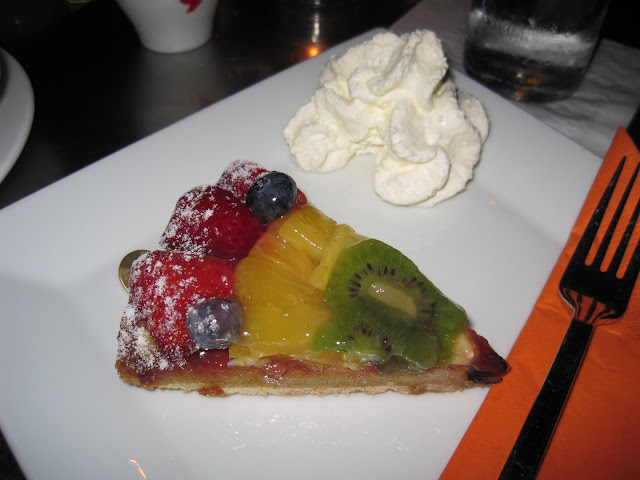 We made it home in time to pack our bags in 15 minutes before going to bed. On Saturday, we found ourselves in Bermuda! More on that later…. 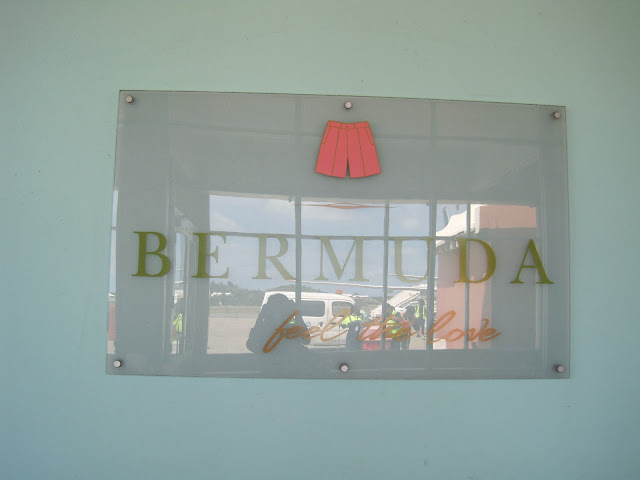 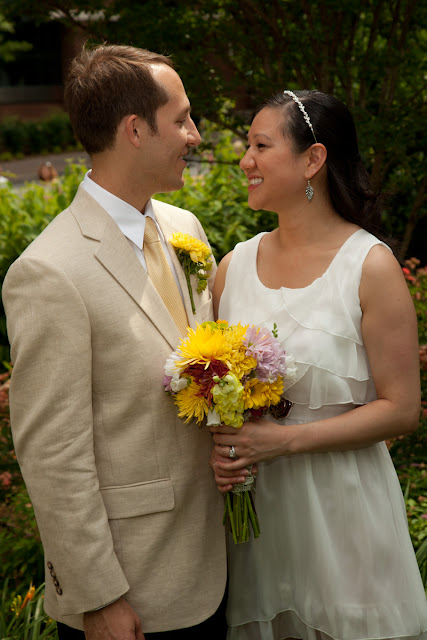