Arizona happened to be the place I found myself for my first anniversary with Raisin Bread. He lived in Phoenix for a number of years, and we were in town for his friends’ wedding. We wound up being there for the weekend and took the opportunity to explore a number of the areas natural wonders.

Phoenix in January is absolutely perfect with its sunny skies and mild temperatures. Our first day was spent driving to Sedona and taking in Red Rock State Park. We both weren’t appropriately dressed to hike. Instead, we found some easy walking trails and drove to various viewpoints.

It always amazes me just how diverse the landscape of our country is. Time has carved these beautiful and unusual pieces out of the land for us to enjoy.

The Chapel of the Holy Cross is literally built into the rock formations in Sedona and is open to the public. Being a formerly religious person, I still have a deep respect for the religions of the world and seeing the church combined with nature was stunning.
Although I would have liked to have explored Red Rock a little more, just looking at it was awe-inspiring. Every formation had it’s own life and presence. It was also a romantic way for us to celebrate our first year together.

We weren’t the only couple enjoying the view!

Sedona struck me as an extremely hippie town. There were galleries selling all sorts of Southwestern artwork, vegan restaurants and a whole lot of alien-related establishments including Ye Olde UFO Store.

In Phoenix, we went on two hikes after the wedding. The first was Papago Park or as Raisin Bread calls it “the rock with a hole in the middle.” Another neat rock formation in the middle of a big city. 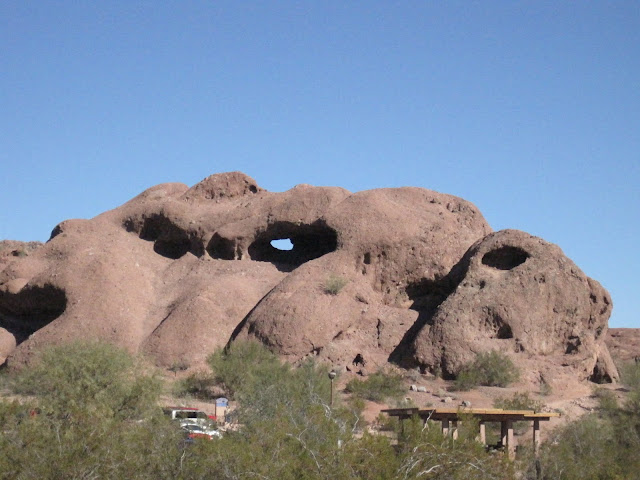 We walked up to the rock with a hole in it and saw the city through the other side.
Our real hike came later with a trip to Camelback Mountain. You can see this mountain from all over the city, so I have always wanted to climb it starting from my first visit to Phoenix in 2004. I am not sure what the name of the trail we went on was but it was a little hairy in sections.
As you first begin to ascend Camelback, the view contains a bunch of Phoenix’s cookie cutter homes. Not exactly a serene view.

But as you continue up and look back down towards where you came from, you can see the entire length of the “camel’s back.”

I didn’t take many more photos on the rest of the climb up because the trail basically ends. It is rock scrambling the rest of the way up to the summit. Keep in mind that this was during the new year holiday so there was a bit of a bottleneck at some sections.
Once we got to the top, we were met with a tree that had been decorated for the holidays!