Skip to content
Search
Close
A few Fridays ago, Raisin Bread’s office moved, which gave him the afternoon off, and since I am currently a lady of leisure, we decided to meet up in the city to explore.

Our first stop was for lunch at Proof Restaurant. I’ve been having a hard time finding restaurants that meet my Los Angeles standards, but Proof was a welcome surprise. We both liked everything we ate, but we wouldn’t be able to frequent it often because it was a little on the fancy side.

We ordered the chilled cucumber avocado soup to start. It was extremely refreshing with little bits of crab meat hidden in between rich and creamy spoon fulls. Raisin Bread tried to lick the bowl clean, but I was able to stop him.
For my entree, I had the shrimp burger with jalapeno, shaved cucumber, cilantro, and pickled daikon and carrots, and I also added in the sprouts for good measure. The pickled vegetables made this burger.
Raisin Bread ordered the lamb burger with chickpea fries. We were a little skeptical of the fries, but when we asked the waiter how they were prepared, he said they puree the chickpeas, lay it on a sheet pan to bake, cut them up into fry-shape, and then did something else I can’t remember. With so many steps to create a couple of fries, they must have been remarkable. The lamb burger was so juicy that I burned my hand after my bite. Owwie.

After lunch, Raisin Bread had to change out of his work clothes, so I suggested we go to the Smithsonian American Art Museum, which was directly across the street, so he could sneak into the restroom with all of the tourists to change. When we entered, we noticed that an exhibition of Norman Rockwell paintings was occurring and decided to stay to view it. The exhibition was entitled “Telling Stories: Norman Rockwell from the Collections of George Lucas and Steven Spielberg.” I highly recommend seeing this if you have a chance. It is remarkable that Mr. Lucas and Mr. Spielberg own all of these pieces but even more so that they shared them with the public to experience. We watched a 12 minute film which detailed why each of them collect Rockwells and what they see in the paintings. It was extremely educational.

Our next stop was a visit to the National World War II Memorial. The last time I visited DC as a tourist was in 2002 and this memorial was not yet open. For some reason, I have also had a strange fascination with the history of WWII, so I felt the need to visit this memorial. I always found it strange that there were memorials to the Korean and Vietnam Wars but not to WWII. My sense from the memorial is that it doesn’t really convey the spirit of WWII. It’s a marble monster with tourists splashing around in the fountain. There isn’t the sense of respect or reverence that I would like visitors to feel when thinking about this war.

The next memorial we visited was the Lincoln Memorial. This has always been one of my favorite memorials because it portrays Abraham Lincoln as I always imagine him: deep-thinking and pensive, knowing that he carried the weight of a nation on his shoulders.

We asked a couple to take our picture. After which, we had to explain that they could see Lincoln for free. They just needed to go up the steps and inside the building that is on pennies.
I don’t know much at all about the Korean War, but this memorial has always struck me as very effective in inspiring utter silence from its visitors. The memorial is powerful in that visitors don’t make a peep when walking through it until they have reached the other side. I also find this to be true of the Vietnam Memorial, which we did not visit this day.

By this point, our feet were sufficiently dead, but we pressed on to the Smithsonian Castle, our final stop for the afternoon, to view “Read My Pins: The Madeleine Albright Collection.” Let me tell you, the lady likes her pins. The stories behind each one was by far more interesting to learn than actually seeing the pins.

On my birthday, Raisin Bread took me to the Corcoran Gallery of Art to see the exhibit Chuck Close Prints: Process and Collaboration. This was my second visit to this museum, and I finally understood why I liked it so much the first time I went. There aren’t any tourists! Well, they also have wonderful exhibits.

The exhibit focused on Chuck Close’s process of artmaking, rather than the pieces themselves.

On Saturday, we went again for their Free Summer Saturdays. We signed up to participate in a community art project to make a portrait inspired by Chuck Close’s methods. We were given a square of John Singer Sargent’s portrait of Margaret Stuyvesant Rutherford White, a white square of paper, and charcoal pencils.

Raisin Bread and I chose sections next to one other, and here are the finished pieces. We added our squares to the board with this result. 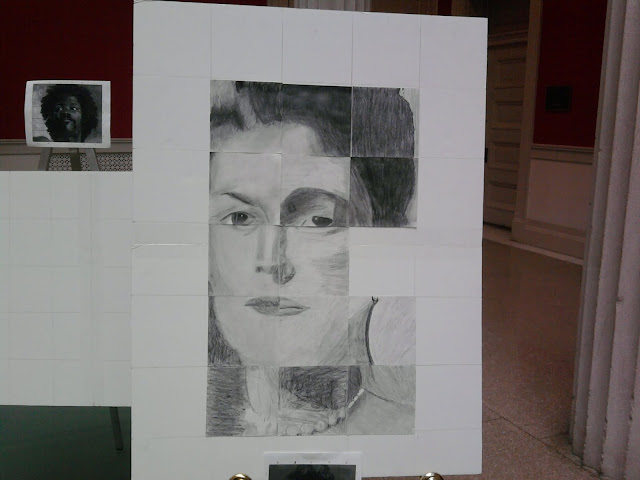 Afterwards, we made our way through the galleries, but before we left for the day, we decided to see how far along the rest of the piece was. Not bad if you ask me. It’s interesting to see different people’s styles and interpretations. Most obviously, the shading is very different and the direction of pencil strokes. Then there are areas that are just wrong, like the nose. 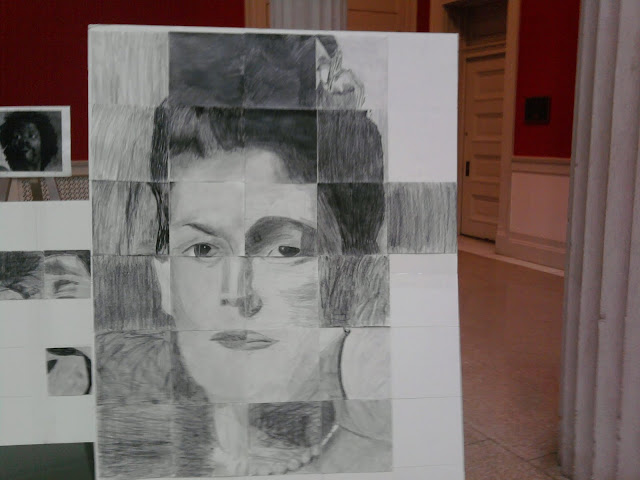 Still, I had a wonderful time participating in this project and seeing how it all came together/

Since Raisin Bread and I had no desire to spend four hours at our neighborhood bar on Sunday afternoon, we decided to create a Spanish and Dutch-themed (or as close as we could come) afternoon of World Cup viewing at home. 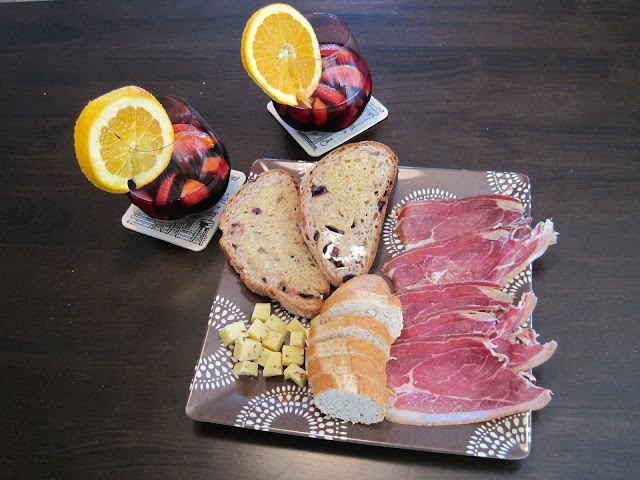 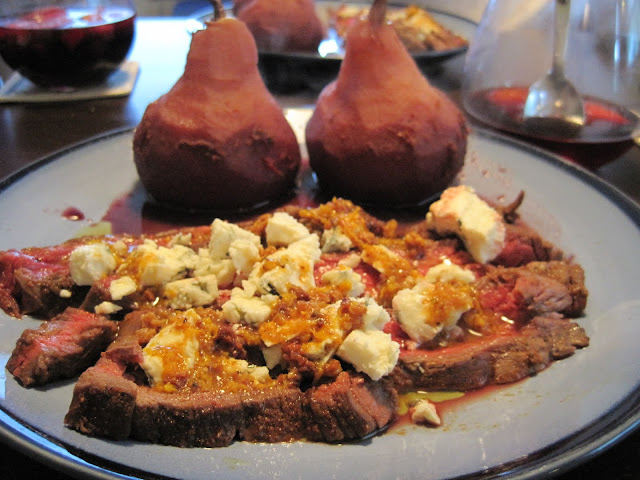 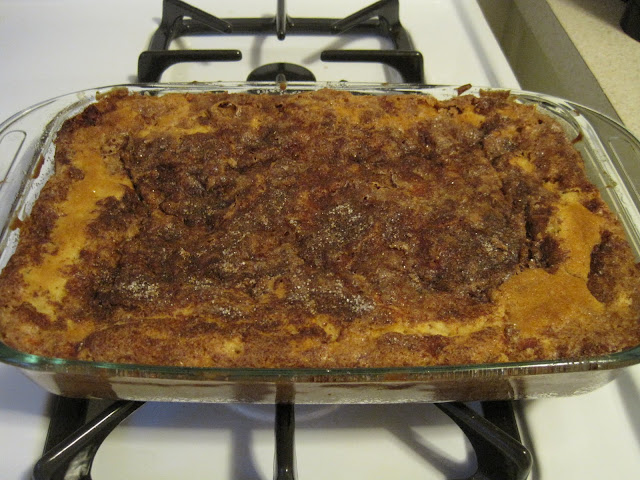 And because Spain won, I got a massage from Raisin Bread.

Last week, results from a survey conducted by Travel Blog Exchange (TBEX) were released. 318 travel bloggers, including yours truly, were included in the survey, and below are some highlights which I found to be most interesting.

The full survey results can be found here.

The moral of the story is that the majority of travel bloggers do not make money from blogging for themselves or others, so don’t quit your day job!

Mark Peel’s Campanile holds a grilled cheese night every Thursday evening. Selling me on grilled cheese is relatively easy but $15 and up grilled cheese sandwiches is slightly more difficult. Before I left the west coast, I ventured to Campanile to see if they were worth it.

Entering the restaurant, I was welcomed by the sun beaming through the windows on the high ceilings. It was as if I had never entered a building at all. The space reminds me of a cloister that had somehow become enclosed over time. The evening was beautiful and sunny and it was welcomed into the dining room.

As usual, I had studied the menu carefully prior to my dining excurison and decided on the skirt steak grilled cheese sandwich, but my dining companions and I decided to order two other sandwiches and split them, so I was also able to try the lamb and classic versions of the sandwich.

Of the three, my favorite was the skirt steak, followed by the classic and finally the lamb. Besides the cost of the dishes for what they were, I was also worried about the portion sizes. However, the La Brea Bakery bread came in huge slices which made the sandwiches reasonably large, and the sandiwch also came with a healthy-sized mixed green salad.