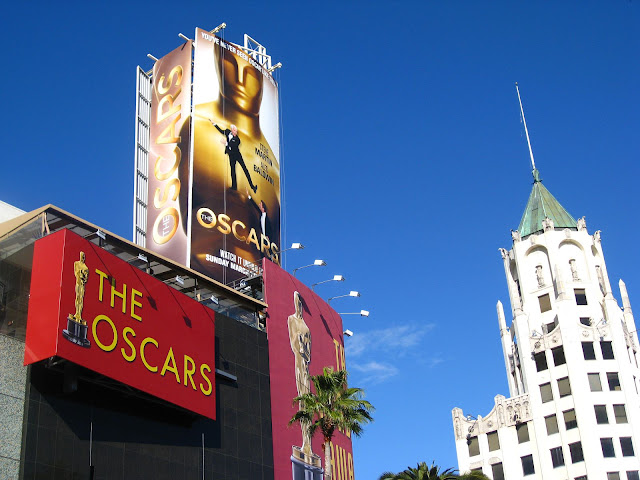 It isn’t every day that you or I get invited to attend the Academy Awards. I learned that the only way to get your booty into the Oscars is to be invited. The seatfillers have an “in” even. Academy members go through the lottery system and if they are picked, they still have to pay for their tickets. I found myself in a very fortunate situation when my dear friend invited me to attend as one of her two guests.

For nominees, the night is a once in a lifetime experience, but it was also for me since I have absolutely nothing to do with the film industry.The first item of business was to find the dress. I’m on a tight budget and wound up scouring a number of closets to find something to borrow. What I wound up with was a beautiful blue silk Calvin Klein evening dress that was….a size two and a little too tight. I had two back up dresses in case it was still too tight after two weeks but my heart was set on the blue one! Thank you, Lean Cuisine, salads and 24 Hour Fitness! I owe you.

The day of “the show” (as people in the know call it) was spent primping for many hours. First was curling the hair and then driving to my friend’s place to pick up the second guest and get our eye makeup done. Then we were off to the Renaissance Hotel to meet up with the benevolent inviter and take some photos before the show.

When the big day was approaching, I wondered several times how one gets to Hollywood and Highland when Hollywood and Highland are both closed for the Oscars. In our ticket packet, we were provided with a handy dandy auto pass and when we approached said closed roads, the nice police officers removed the barricades for us to drive on through. Even at this point, there were a ton of looky-loos standing on the sides of the road, taking photos. When we finally got to the intersection of Hollywood and Highland, we found ourselves in a bit of a situation. Our grand plan was to go to the Renaissance, change and take photos. When we arrived, our car was promptly swept away and we were left surrounded by security guards in the pouring rain. We were dressed casually so these guards started bombarding us with questions of why were we there. Finally, we were escorted to the Renaissance, where we were able to finish getting ready. 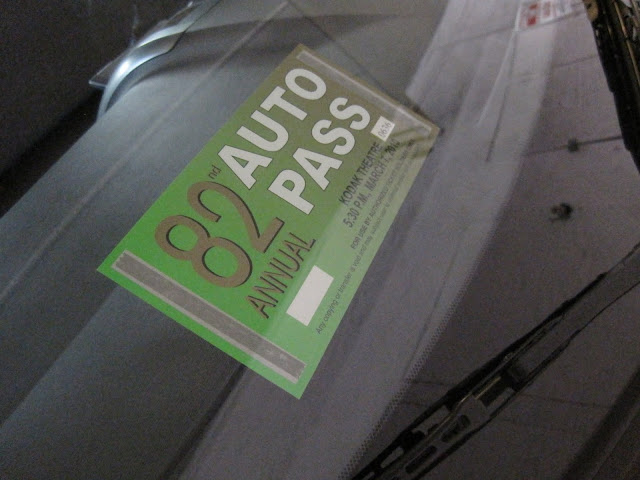 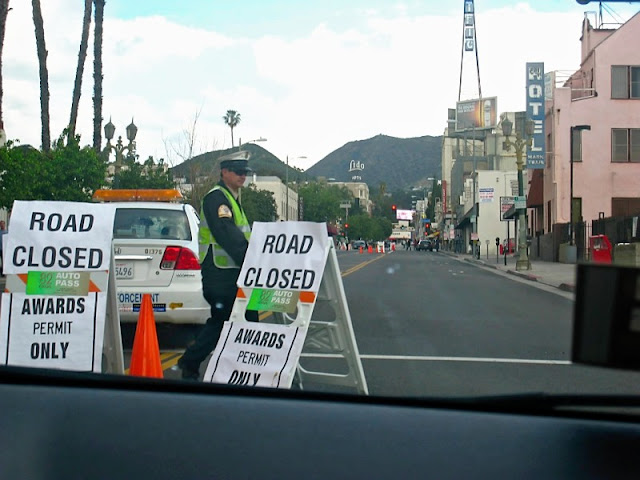 We went down to the red carpet around 4:15 p.m., which would give us a good amount of time to leisurely walk the carpet, meet up with our friend again and then make it into the theatre for the cocktail reception. Immediately upon arriving on the red carpet, Colin Firth was being interviewed to my left and Queen Latifah was stepping out of her limo. After Firthy was done with his interview, he stepped into line and somehow wound up with his shoulder next to my face. He is taller than me after all. 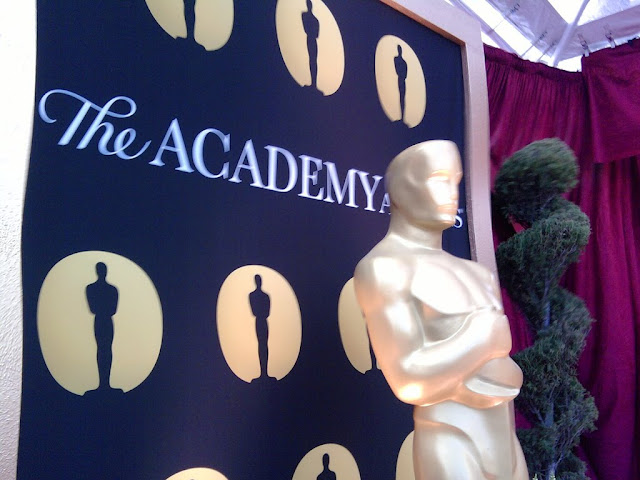 Now, a little explanation of the red carpet is in order. Even at an exclusive event such as the Oscars, people are still STILL separated into the somebodies and the nobodies. At the security tent, the somebodies get quickly swept away by pretty young things in headsets while the nobodys slowly trudge their way through. Then the actual red carpet is separated into two lines, the press line and the nobody-wants-to-see-you-on-tv line. At points, everyone would get mixed together, but in general, it was pretty segregated.

As we were entering the theatre, Meryl Streep was next to me and Woody Harrelson a few people back. Once we got inside the Kodak Theatre, we enjoyed champagne from Moet & Chandon. There were also hors d’oeuvres from Wolfgang Puck but I was only able to get two. I spotted Wolfgang Puck a few tables down talking to a strange looking man with a scruffy beard. Then I realized it was Antonio Banderas and next to him was his wife, Melanie Griffith. As I said, we weren’t very lucky with the cater waiters, but we spied one not far away from us so we went after him. Then I realized who he had stopped to serve. It was Mayor Villaraigosa! Robert Duvall was wondering around a lot and I must have passed him four times at least. With about fifteen minutes left until we needed to take our seats, my friend said, “Look it’s Matt Damon!” When I turned around, he was right in front of me, looking very cheerful. She claims that he smiled at me, but I hate to brag. 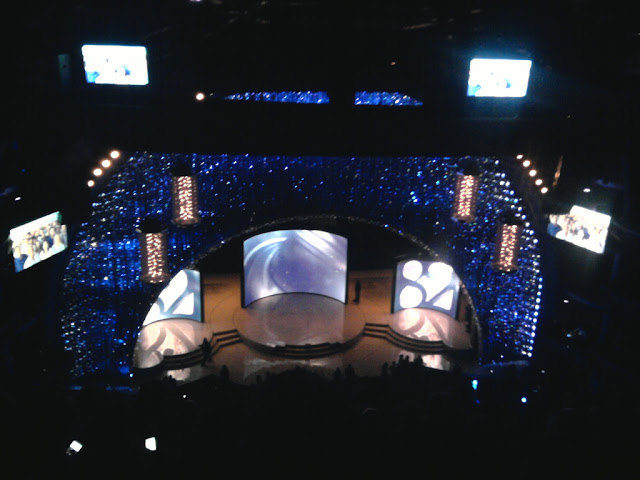 I’m sure you saw the ceremonies so I will just highlight a few things:
– The stage was absolutely beautiful no matter what color it was.
– Duckie! Did you see Duckie?
– Rachel McAdams’ dress
– Love that Hurt Locker kicked Avatar’s butt (I didn’t watch either of them)
– The “Kayne” moment was much more awkward in the theatre than it probably was on television
– I love Gabby Sidibe! She is so adorable. Here is more proof:

The remainder of the night was a bit of a nightmare that I don’t want to get into, but we managed to spot Gerard Butler and Samuel L. Jackson as we were leaving the Kodak.

I suppose attending the most exclusive and prestigious event in Hollywood should make you feel special and I did. I was excited to be there and loved the chance to dress up and be part of the event. But the truth is that I wasn’t part of it. I was just there and it still made me feel like anyone else watching from their living rooms. Yes, I love movies, and yes, I will remember that night for a long time to come and am so grateful that I got to go, but I still felt like a voyeur. 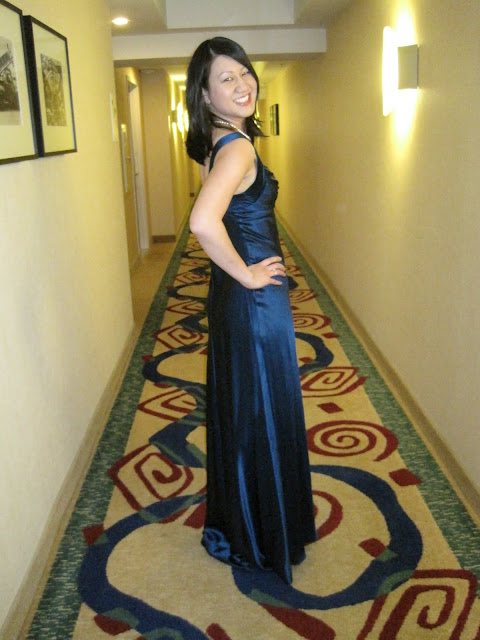 You’ve heard of pop-up shopping. Now, there are pop-up art shows. For one weekend only, Manifest Equality took over the site and parking lot of a former Big Lots! store on Vine Street in Hollywood to present a diverse showing of artwork for a good cause: promoting full and equal rights to all Americans. Lots of famous artists were represented such as Gary Basemen, Shepard Fairey, and Ron English but also a fair share of up and coming artists.

The last dreary Saturday was a nice time to enjoy some works indoors. 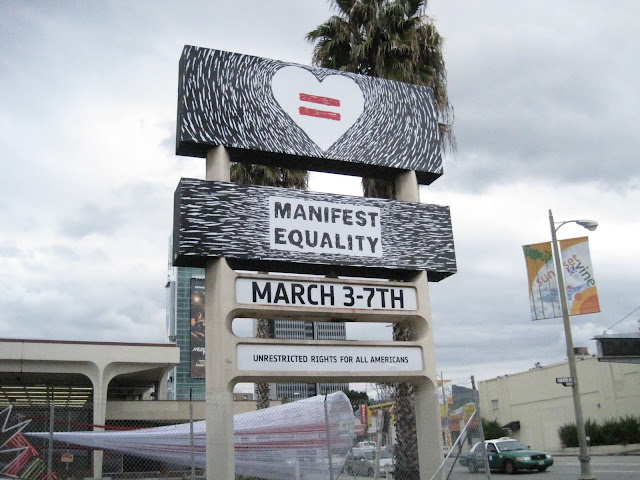 Some of the installations: 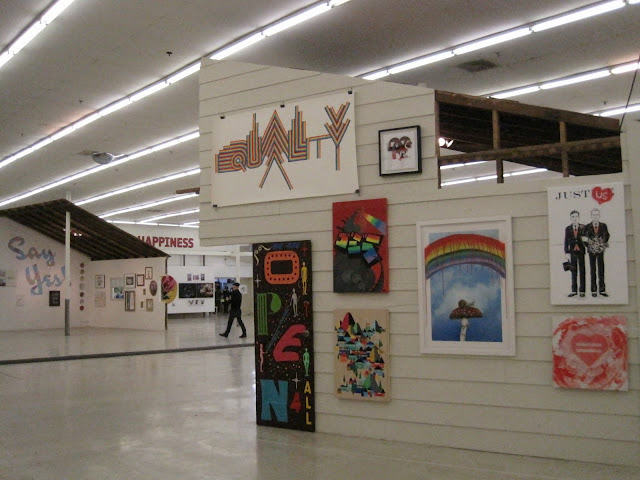 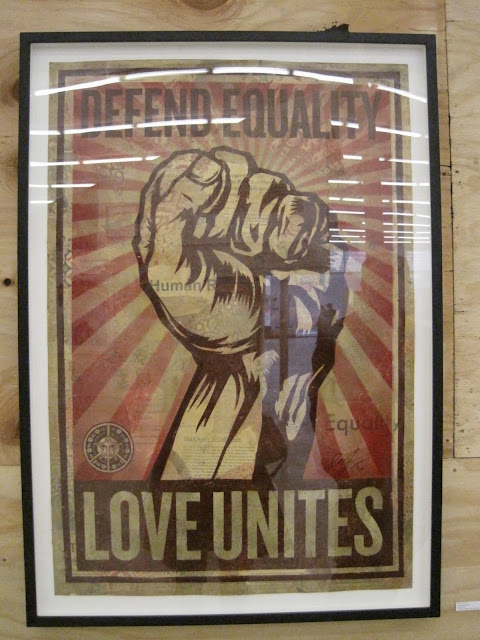 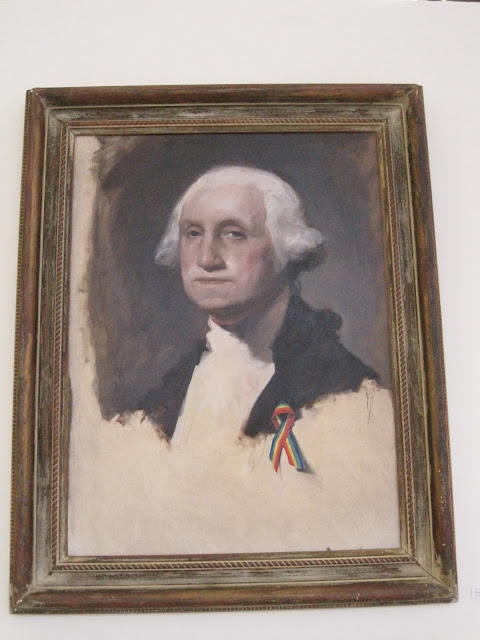 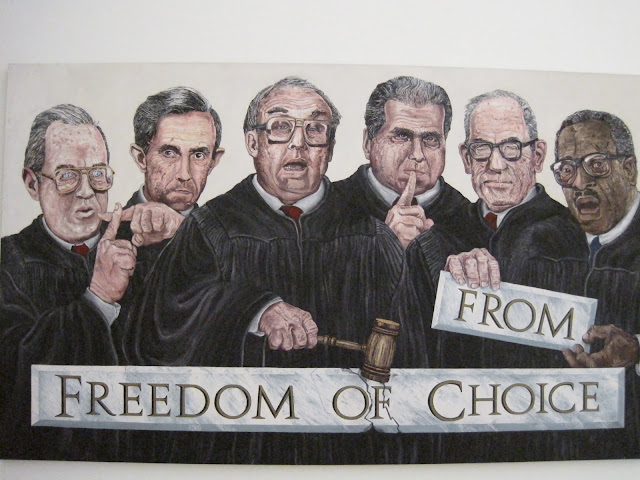 The art show also gave us an opportunity to search for some pieces for our new home. We actually found a piece we both loved, but it was already sold. We looked at the price list anyway and discovered the piece to be extremely affordable. I emailed the artist the next day and now we are in the process of purchasing a few pieces of her work!

All in all, it was a successful outing. Plus, they had an awesome photo booth and free buttons!