We drove for another hour. By then, I knew we were going to Zion National Park. As we drove down the road leading to the park, he pulled up to a shop that had a sign reading “Canyoneering.” Oh dear, I still had no idea what we were doing and asked, “Are you taking me on an adventure?” Finally, I learned that we were going to be doing The Narrows hike at Zion. The Narrows hike is one of the most famous hikes in America. It takes you in the Virgin River, which has carved a remarkable gorge through the sandstone rock. We needed to get some equipment to prepare us for the hike, namely water shoes, booties, a dry bag, and hiking poles.

Once we reached the park, we had to check into our campsite but it was still occupied so we parked in the overflow area and packed up our daybag with lots of water, lunch, and hopped on the Zion bus. During high season, visitors are required to take the shuttle around the park because there would be too many cars in the park otherwise. Ours was the last stop on the route – The Temple of Sinawava. The landmarks around the park were named by the Mormons. They include the Great White Throne, Three Patriarchs, West Temple, East Temple, Angel’s Landing, and my favorite The Altar of Sacrifice.

From there, we began the Riverside Walk trail which leads to beginning of The Narrows hike. The walk was a very easy, serene 1 mile walk along the Virgin River with lots of shade and greenery.

We didn’t really have a set goal in terms of how far we wanted to go on the hike, plus there was danger of flash flooding that day. So we just decided to go as far as we could and then turn back. Once you reach the River, you are basically hiking or wading in water the entire time. It takes a lot longer to walk in water than on land especially with boulders all along the bottom of the river. I am definitely glad we got the proper equipment. It also didn’t help that there were tons and tons of people doing this hike, many with no equipment!! At times, the water would be waist high as you can see below. It was a once in a life time experience. The natural beauty and the knowledge that a river carved all of this amazing landscape that all of us can enjoy!
From time to time, we talked about stopping to eat lunch but everytime, we just continued on. Finally, we stopped to eat at around 2 pm. We had packed some sandwiches and found a nice, big boulder in the shade to take our break. We noticed these cute, green, fuzzy caterpillars on the boulder and admired them. A couple of them must have found me curious because they kept walking towards me. It wasn’t until we were getting up to leave that we realized there were a bunch of them crawling on me and I even had two in my pockets!!
As we continued, we finally passed Orderville Canyon, a goal both of us intended to meet even if we never said so. After Orderville Canyon, the crowds significantly thinned out and we had a few moments to enjoy the canyons alone for the first time. It was getting cooler and when we asked passersby how much longer the hike was before you reached the neck-level water, they said about another hour and twenty minutes. We decided to turn back. It had been over 3 miles since we started. I thought this was the most beautiful section we had been to. The canyon was more narrow so the cliff faces were much more powerful and close. 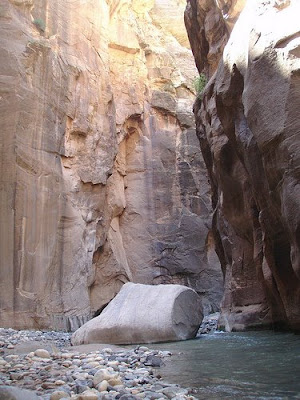 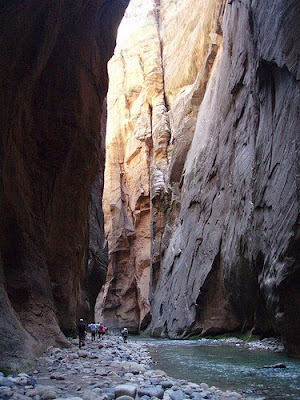 At around 6 o’clock we were finished with our hike and went to return our equipment. Matt kept mentioning that he thought it was going to rain and pointing at this huge grey cloud. As we went back into the car to return to camp, a large gust of wind swept by and it started raining. We drove back to the campsite anyway and as soon as we did, it was pouring down. We sat in the car trying to decide what to do, thinking it was just a quick thunderstorm and we would be able to set up camp, but then it started hailing and back to raining. Matt had prepared all of this food for the campfire but it looked like our only option was to get some dinner and then decide whether or not to camp or try to find a hotel room.

Everything worked out in the end. We had a terrible Mexican dinner in Springdale and it stopped raining. We went back to Watchman Campgrounds, set up camp, and then had some of Matt’s food as an evening snack. He made some delicious bacon-wrapped chicken kabobs with veggies! Yummy. Then we hit the hay!