Matt and I decided about a week before the long weekend to take a roadtrip to Phoenix with a stop in Joshua Tree National Park. I left work a little early and hit the road to pick him up from work. It took me quite a while and we didn’t wind up leaving until around 4:30 in the afternoon after packing up the car. We decided to wait out traffic and went to Monterey Park to buy food and firewood and also have dinner at Little Fat Sheep.

Little Fat Sheep is a Mongolian hot pot place. I don’t know what the difference between Mongolian and Chinese hot pot are, but it seemed pretty similar to me. We ordered the half and half, which is half spicy broth and half original broth. The spicy broth comes on a scale of 1 to 10 with 10 being the spiciest. I ordered a 3 because Matt can’t eat spicy. After about 20 minutes, I couldn’t eat it anymore either because the broth comes with all of the spices and chilis inside it still and as it boils, it becomes more and more spicy over time. Items we ordered for the soup: sliced beef, beef balls, seafood dumplings, spinach, fried tofu, shittake mushrooms, and handmade noodles. The beef balls were terrible but everything else was pretty good. Best items were definitely the noodles and dumplings! Yummy!

After dinner, we made a quick stop to Quickly for boba before hitting the road again.

By the time we reached Joshua Tree, it was obviously nighttime. We didn’t make reservations for a campsite and it was already very late in the night, so we had to ask the park ranger which campsite we should try. She told us that we would probably have the best luck at Jumbo Rocks, which is basically smack dab in the middle of the park. The national park is much much larger than I was expecting it to be. We had to drive 17 miles to the campsite, but along the way, there were tons and tons of joshua trees along the road. Although it was dark, you could still see many of them as well as the giant boulders behind them. Whoever says there aren’t any more joshua trees in the park is lying. It was a beautiful sight and I wished we were seeing this area during daylight hours because we were not intending to return this way the next day.

We finally reached Jumbo Rocks. It is actually the largest campground with 124 campsites. We found a few open ones and finally decided on number 26, which was located in front of a large boulder. Good for me to pee behind in the middle of the night. We unpacked the car, made a campfire, built the tent, roasted s’mores and hit the sack.

The tent was roasting by 7:30 in the morning and opening the vents would have just caused more heat to enter, so we were forced to start our day early. It turned out to be a good thing considering how hot it would be later on in the day. We quickly packed up the car and had some breakfast. In the daylight hours, we could finally enjoy our surroundings. Now I could see why this area is called “Jumbo Rocks.”

Our first stop for the day was a short 1 mile roundtrip hike to Skull Rock. I was not extremely impressed with it.
Next we drove to another area of the park to see Split Rock, which is named for obvious reasons. We climbed into the split like dorky tourists too!
After visiting Split Rock, we hopped back into the car and drove to the north end of the park to do the 49 Palms Oasis hike. The trailhead is outside of the national park, near the city of Twentynine Palms.

The flora on the hike was not spectacular compared to what we had already seen, but seeing an oasis of palm trees in the middle of this uninviting, harsh landscape was something I didn’t want to miss. The hike itself was only 3 miles roundtrip and took us about 2 hours to do including the time we spent relaxing at the oasis.

When I hear the word “oasis,” I imagine a nice blue pool of fresh, clear water. What it really means is a festering tiny pool of green, stinky water. At least there was shade and interesting dragonflys buzzing around. I still think it was worth the journey to see the way nature can sustain itself in the middle of the desert. 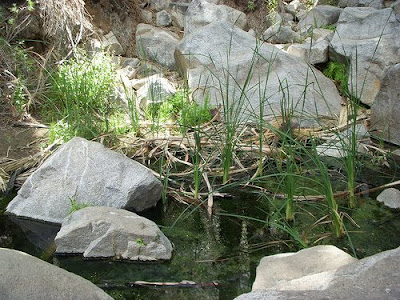 Tons of hikers were just beginning their hikes as we were leaving the trail, by that time it was close to noon and it was pretty hot out. I’m glad we were finished with our most strenuous activities by that point in the afternoon.